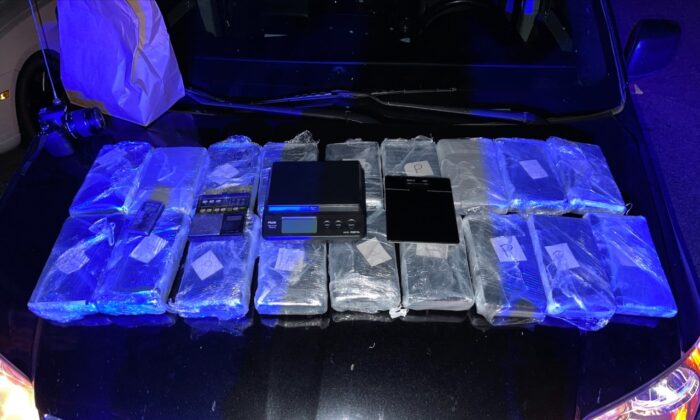 An investigation by San Bernardino county deputies uncovered 19 bricks of cocaine weighing 42 pounds with a street value of $700,000 stashed in a vehicle.

While investigating a report of suspected hand-to-hand narcotic sales at around 6:17 p.m. on July 29, the deputies from Central Station, who are assigned to Grand Terrace city in San Bernadino county, were led to the suspect, Ulises Solis Diaz.

Diaz, who was subsequently arrested, had active warrants and was in possession of illegal drug paraphernalia, the San Bernardino County Sheriff’s Department said in a statement.

“During a search of Diaz’s vehicle, deputies observed a bag containing a large quantity of suspected fentanyl pills, ammunition, and a ‘Slim Jim’ burglary tool, commonly used in the commission of vehicle burglaries,” the sheriff’s department said.

“A search warrant was authored and served on the related vehicle. Through the service of the search warrant, deputies located approximately 19 brick shaped packages containing a white powdery substance suspected to be cocaine, and multiple scales indicative to the sales of narcotics,” the sheriff’s department said.

“The amount of narcotics located was estimated to be 19 kilograms (42 pounds), with an estimated street value of approximately $700,000.”

Diaz was subsequently arrested and charged with possession of narcotics for sales and booked into the Central Detention Center, where he is being held on $2,050,000 bail.