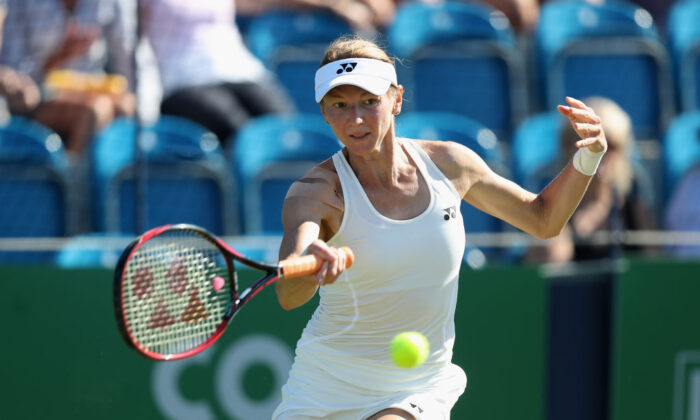 Renata Voracova of the Czech Republic in action against Johanna Larsson of Sweden in their Round One match during Day One of the Fuzion 100 Southsea Trophy at Canoe Lake Leisure in Portsmouth, UK, on June 26, 2018. (Christopher Lee/Getty Images for LTA)
Australia

Czech tennis player, Renata Voracova, has vowed to pursue Tennis Australia for compensation after she left the country on the weekend over a visa dispute.

Voracova decided to pull the plug on her Australian Open campaign after her visa was cancelled in the wake of the Novak Djokovic saga.

In an interview with Denik, a newspaper in the Czech Republic, Voracova, 38, said her compensation claim would not be small.

“The air ticket alone cost 60,000 Czech crowns (US$2,822), and my coach travelled with me—and then there is all that time, hotels, training for the grand slam, the potential prizemoney,” she said.

“I hope Tennis Australia will face up to it and that we won’t have to take legal steps,” she added.

“I’m not thinking about tennis. I’m still waking up from the shock, I haven’t processed it yet. I’m exhausted.”

The Women’s Tennis Association (WTA) has backed Voracova, noting that it encouraged players to be vaccinated and was supportive of Australia’s travel restrictions.

“That being said, the complications experienced over the past few days where athletes have followed the approved, and authorised process of receiving a medical exemption for entry into the country are unfortunate,” the WTA said in a statement.

“Voracova followed these rules and procedures, was cleared for entry upon her arrival, competed in an event and then suddenly had her visa cancelled when she had done nothing wrong,” it continued.

“We will continue to work with all authorities on addressing this unfortunate situation in an appropriate manner.”

The Czech player was initially granted entry to Australia and had competed in a warmup tournament under a medical exemption, which had also been granted to Djokovic.

However, after Djokovic’s visa was cancelled, Australian authorities began an investigation into several other players and support staff.

Voracova had her temporary visa cancelled as a result and was forced to stay in the same Melbourne hotel for quarantine as Djokovic.

While the Serbian challenged the cancellation of his visa, Voracova decided instead, to leave Australia “based on her own decision to end her participation in the tournament,” according to the Czech Foreign Ministry.

The federal immigration minister, however, does have the discretion to cancel Djokovic’s visa if he chooses. Currently, no decision has been made.