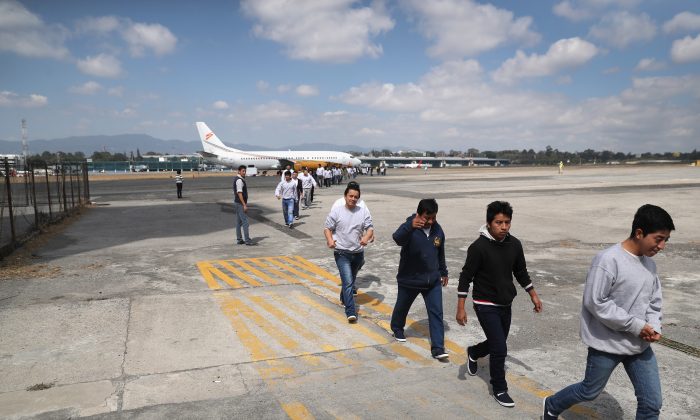 Guatemalan immigrants deported from the United States arrive on an ICE deportation flight in Guatemala City, on Feb. 9, 2017. (John Moore/Getty Images)
US

The memos do not change any immigration laws, but take a clearer stance on enforcement.

Priority for enforcement focuses on convicted criminals, aliens who have been charged with a criminal offense, and those who “pose a risk to public safety or national security,” including individuals involved in espionage and terror-related activities.

In addition, enforcement will focus on aliens who have engaged in fraud or willful misrepresentation in regard to official documentation or status in the United States; any individual who has abused a program related to the receipt of public benefits; and any who have been given notice of deportation but remain in the country.

However, DHS personnel have “full authority to arrest or apprehend an alien whom an immigration officer has probable cause to believe is in violation of the immigration laws,” the DHS states.

The Deferred Action for Childhood Arrivals program remains in place, though immigrants in the program will still be eligible for deportation if they commit a crime or are otherwise deemed to be a threat to public safety or national security, according to the department.

“Except as specifically noted above, the Department no longer will exempt classes or categories of removable aliens from potential enforcement,” the memo states.

Under the new policy, if someone can’t prove he or she has been living in the United States continuously for two years, he or she could now be eligible for expedited removal, rather than reviews or hearings. Previously, expedited removal was limited in practice to people apprehended within 100 miles of the border and who had arrived within the past two weeks or by sea.

Immigration and Customs Enforcement (ICE) has been directed to hire 10,000 more officers and agents. Customs and Border Patrol can hire 5,000 additional Border Patrol agents, as well as 500 Air & Marine Agents/Officers.

A program introduced in 2014 under President Barack Obama, called the Priority Enforcement Program, has been terminated. Instead, the Secure Communities Program, launched in 2008, has been restored.

“The Priority Enforcement Program failed to achieve its stated objectives, added an unnecessary layer of uncertainty for the Department’s personnel, and hampered the Department’s enforcement of the immigration laws,” the DHS memo states.

Under the Secure Communities Program, the fingerprints of every individual arrested and booked into custody—including U.S. citizens and legal permanent residents—are checked against immigration records via the FBI, according to ICE.

“If these checks reveal that an individual may be unlawfully present in the United States or otherwise removable due to a criminal conviction, ICE determines what, if any, enforcement action to take,” ICE states.

Local law enforcement do not have additional authority under the Secure Communities Program and don’t make immigration decisions. State and local jurisdictions cannot opt out of the program.

Section 287(g) is an opt-in program slated for expansion and is heralded as “a highly successful force multiplier” by Kelly.

Section 287(g), which was added to the Immigration and Nationality Act in 1996, gives all law enforcement officers the same powers as immigration agents to investigate, apprehend, or detain suspected illegal immigrants. .

“The surge of illegal immigration at the southern border has overwhelmed federal agencies and resources and has created a significant national security vulnerability to the United States,” Kelly stated.

Customs and Border Protection has been directed to immediately begin planning, design, construction, and maintenance of a wall along the southern border.

DHS has put an end to the “catch and release” practice, which allowed hopeful immigrants to remain in the country while they wait for a court decision—which can take up to five years. There are more than 534,000 cases currently pending on immigration court dockets nationwide, according to DHS.

Instead, aliens will be detained until a ruling is made on their status and they are either admitted legally or deported. Discretion is given for “urgent humanitarian reasons or significant public benefit,” according to Kelly, but should be used sparingly.

“The detention of aliens apprehended at the border is critical to the effective enforcement of the immigration laws,” Kelly said. The number of detention facilities along the southern border is expected to increase, along with the number of officers assigned to determine claims of “credible fear” of persecution or torture and asylum fraud.

The DHS documents enforce a provision in the Immigration and Nationality Act that allows the agency to send some people—regardless of where they are from—back to Mexico after they are caught illegally crossing the Mexican border.

Tighter control over who is an “unaccompanied alien child” is needed to stop abuse of this provision, the department said.

About 60 percent of minors initially determined to be “unaccompanied alien children” are not eligible for the status or the benefits it affords (including care and social services) because they are entering the country to live with one or more parents illegally residing in the United States.

Approximately 155,000 unaccompanied alien children have been apprehended at the southern border in the last three years, DHS said. Most of these minors are from El Salvador, Honduras, and Guatemala, many of whom travel overland to the southern border with the assistance of a smuggler who is paid several thousand dollars by one or both parents, who reside illegally in the United States.

In concert, DHS plans to crack down on the illegal smuggling or trafficking of children into the United States.

Additionally, DHS is prioritizing the disruption of transnational criminal organizations that operate near the border, with a focus on those involved in human smuggling.

A new office is to be established for victims of crimes committed by illegal aliens, called Victims of Immigration Crime Engagement (VOICE) Office. The office will be run by ICE and will provide victims of crimes information including the offender’s immigration status and custody status.

Funding for the office will be reallocated from funding that currently aids illegal aliens.

Trump has put a spotlight on the victims of illegal aliens that commit crimes, often citing cases such as that of Kate Steinle, who was killed in a shooting on a San Francisco pier in July 2015. Her killer was in the country illegally and had been ordered deported five times, according to authorities.

In a testimony for a House committee last year, then-ICE Director Sarah Saldaña said 36,007 illegal alien criminals had been released back into the community in fiscal 2013.

In April 2016, ICE sent the Boston Globe a list of released criminals that showed that 83 percent of those released nationwide from 2012 to 2016 are convicted felons.

“The review reveals the damage inflicted on victims by criminals who were ordered to be deported when their sentences were complete, and were not, and it raises questions about how the government handled their cases,” the Globe reported.