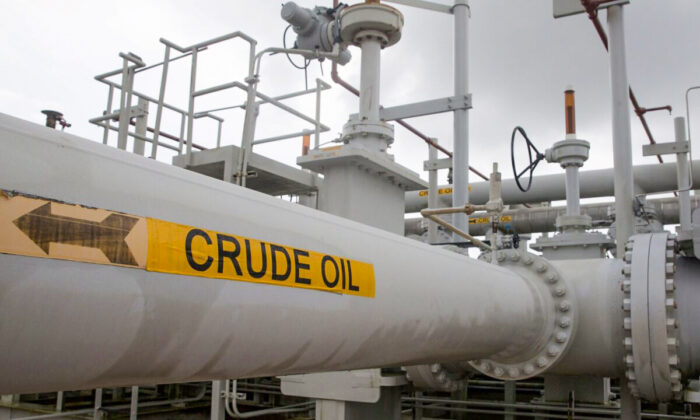 A maze of crude oil pipes and valves is pictured during a tour by the Department of Energy at the Strategic Petroleum Reserve in Freeport, Texas, on June 9, 2016. (Richard Carson/Reuters)
Viewpoints

In the film “All the President’s Men,” Washington Post reporters Bob Woodward and Carl Bernstein’s shadowy source, “Deep Throat,” says, “Follow the money.” Some point to evidence that there really was no Deep Throat or that there were actually half a dozen Deep Throats, but what the supposed source actually says in Woodward and Bernstein’s book is: “The key was the secret campaign cash, and it should all be traced.”

Despite the fact that attacking rich oil companies is a favored Democratic Party talking point, President Joe Biden has, for all intents and purposes, been converting oil into campaign cash for his party’s House and Senate candidates as their midterm campaigns go into high gear—and it doesn’t take any investigative reporting to trace it. This president has been abusing his executive powers over the Strategic Petroleum Reserve, which is only supposed to be tapped into during times of emergency, and Democrats at risk of losing congressional seats doesn’t qualify as one of those times.

GasBuddy.com reports that gasoline at lower than $3 per gallon can now be found in areas near Houston, Atlanta, and within the state of Mississippi. The Democratic Congressional Campaign Committee boasted earlier this month that “gas prices are down more than $1.20 a gallon in just about 70 days. That’s because the president increased supplies, went after price gouging, and released the Strategic Petroleum Reserve [SPR].” In fact, the Democratic-controlled Congress hasn’t enacted its threatened hate-oil legislation restricting Big Oil’s supposed price gouging, for which there’s no evidence, nor has it passed the windfall profits tax Democrats proposed for oil companies. And Biden has done the opposite of increasing supplies, canceling the Keystone XL pipeline and imposing restrictions on energy production in Alaska and on federal lands and waters, at variance with congressional directives.

Even with the drops, the average price at the pump remains $1.30 higher than the $2.38 that the country enjoyed the week of Biden’s inauguration last year; from then to the week before Russian President Vladimir Putin’s invasion of Ukraine, the average price of gas has increased by nearly 50 percent. What’s more, Treasury Secretary Janet Yellen just warned of a return to higher gas prices after the midterm elections in November, citing the European Union’s pending reduction in the purchase of oil from Russia as it continues its war against Ukraine.

So the drop in gas prices over the past couple of months is a brazen political maneuver to dampen certain Republican gains in Congress on Election Day. Biden has depleted the SPR by more than 160 million barrels to its lowest level in 37 years, with reserves falling to about 453 million barrels. The SPR exceeded 700 million barrels in 2008, remaining at that level until after September 2011.

The SPR isn’t a presidential toy to be used to help his party. It was established in the aftermath of the 1973–74 oil embargo and at full volume constitutes only 30 days of oil consumption for the nation, to be utilized in wartime or other national emergencies that could disrupt global petroleum supply routes. President Dwight Eisenhower originally proposed the establishment of such a reserve supply after the Suez Canal crisis of 1956.

Underlining just how irresponsible and dishonest the president’s misuse of the SPR has been is the fact that millions of barrels of the reserve oil he released, worth hundreds of millions of dollars, ended up in the hands of the communist Chinese state-owned firm Unipec, which has been linked to his son, Hunter Biden.

The Paris-based International Energy Agency, consisting of 31 member countries, knew back in May that the unilateral release of the U.S. emergency reserves was being conducted for political purposes rather than to compensate for any global supply disruptions, as Reuters was told by IEA “sources who declined to be identified because of the sensitivity of the topic.”

When will the U.S. emergency oil supply be replenished? The Department of Energy stated that “we anticipate that replenishment would not occur until well into the future, likely after fiscal year 2023.” It was reacting to Bloomberg reporting that the beginning of refilling the SPR could be triggered if oil prices fall to lower than $80 per barrel; crude isn’t much higher than that right now at less than $85. So if the report is true, the replenishment could begin soon. But a disturbing aspect of the story is the Biden administration’s rationale for the move: It reportedly would be trying to prevent a global reduction in oil prices. Imagine if voters believed this.

Petroleum remains what it has been for more than a century: the lifeblood of modern economies throughout the world. Democrats have abused it every which way, whether it’s restricting its use out of green extremism or manipulating its price in an undemocratic yearning to retain power in Washington.