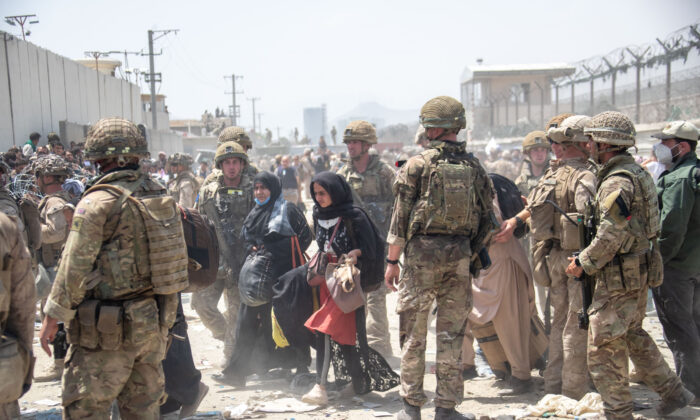 British armed forces work with the U.S. military to evacuate eligible civilians and their families out of the country in Kabul, Afghanistan on Aug. 21, 2021. (British Ministry of Defense Crown Copyright via Getty Images)
Viewpoints

Departure From Afghanistan Part of Era of Failed Foreign Policy

The best that can be said of the appalling departure from Afghanistan is that the current Taliban government in that country does appear to be less compulsively barbarous than the previous Taliban government that was sent packing in 2003.

This new regime is at odds with the more uninhibitedly terrorist organizations that seek to return to Afghanistan and operate from there, including ISIS and al-Qaeda. Dealing with more egregious terrorists than themselves could have a sobering influence on them as they actually try to govern that poor and primitive, land-locked country.

There is comparatively little evidence that this regime is systematically hunting down all those who collaborated with the former government and the fact that the first post-(or inter) Taliban Afghan leader, Hamid Karzai, chose to remain in Kabul indicates that this is a slightly more civilized administration.

More than 80 percent of Afghanistan’s population of 38 million has been born in the last 20 years since the previous Taliban government was evicted, and it may not be like falling off a log to reimpose all the male-dominant and other feudal restraints of traditional Afghan society.

The Taliban is not popular and relies entirely on cohesion, force, and fanaticism to sustain itself. These limitations may impose at least a minimal level of sanity. All the neighboring countries have their own subsidized protégé factions in Afghanistan: Pakistan, Iran, India, Uzbekistan, and to some extent Russia. Any government that has any plausible authority in Afghanistan will certainly be a geographic, ethnic, and very factionalized coalition.

It has never been the case that Afghanistan really was, as the instant pundits of American late-night television claimed, “the graveyard of empires.” But President Biden is correct that Afghanistan has practically no geopolitical importance, which is why no Great Power has ever been able to justify the infusion of forces that pacifying such a rugged and primitive place would require. (Even Alexander the Great was only interested in it as being on the route to India.)

The fact that the United States has allowed mission creep to extend a surgical assault on al-Qaeda following 9/11/01 to develop into nation-building and an 18-year partial occupation of ever-evolving purpose is a perfect illustration of the failure of American foreign policy in the post-Cold War period.

The more venerable readers will recall that the Cold War began when Stalin, Churchill, and Roosevelt pledged in the Declarations on Poland and on Liberated Europe at the Yalta Conference in 1945 to vacate all the liberated countries except Germany, (which was subject to a four-power occupation regime), and assure free and fair elections within them.

The Western allies did this in France and Italy (although the Communist parties in both countries won over 20 percent of the vote), and the other countries that they liberated. But the Soviet Union did not.

Stalin spurned Roosevelt’s generous offer of economic assistance and provoked the West with the Berlin Blockade and the promotion of the communist factions in the Greek Civil War in 1948, both in contradiction of Stalin’s undertakings.

The policy of containment that won the Cold War was developed by the Roosevelt-Truman strategic team and implemented under the North Atlantic Treaty Organization and the Marshall Plan. Not a shot was exchanged between the Eastern and Western blocs.

Ultimately, as the Soviet Union was spending nearly 10 times the percentage of GDP on defense as was the United States, the communist empire simply and peacefully disintegrated, after President Reagan unveiled his proposal for a comprehensive missile defense system, which the Soviet leadership feared would deprive it of its rough military equality with the United States.

It was the greatest and most bloodless strategic victory in the history of the nation-state. The United States emerged as the world’s only Super Power and the enemies of the West were reduced to terrorism in their animosity: they did not have the forces or military production required to conduct a real war against a serious country and so they dodged without apparent nationality between countries, organizing such terrorist outrages as they could. The targeted countries responded effectively and incidences of terrorism have been far fewer and less general than had been threatened twenty years ago.

The Western victory in the Cold War had been partially enabled by President Nixon’s triangulation of Great Power relations and his recruitment of the Soviet Union and China in pressuring North Vietnam to accept American peace terms in the Vietnam War. As the Soviet Union democratized under Gorbachev while failing to reform its command economy or to address the ethnic strains within the Soviet Union, China, with considerable Western material encouragement, launched its immense drive to economic modernization.

This ostensibly communist country borrowed most of its economic precepts from the capitalists. While this occurred, the United States spent the 25 years after the disintegration of the Soviet Union dabbling ineffectually in the Middle East, apart from expelling Saddam Hussein from Kuwait, as the West heaped preferments upon the People’s Republic of China, on the assumption that good treatment would convert it to the virtues of what diplomats call “rules-based behavior.” This was a grave miscalculation.

In these 25 years ending in the Afghan departure shambles, the Atlantic Alliance descended into “a coalition of the willing,” which was essentially a group of nations happy to have an American military guaranty, but deciding their own level of participation in Alliance initiatives as they arose and rarely on the basis of whole-hearted involvement. Pledges to a significant level of military capability have been almost uniformly ignored.

At the same time, China rose and rose and took advantage of its ability to maintain an artificial level for its currency and flood Western import markets, while attempting to intimidate Taiwan and other neighbors and laying claim to the South China Sea as territorial waters. It engaged in what could probably be called genocidal activity against the Uyghurs, persecuted all religions in China, and violated the Hong Kong treaty signed with United Kingdom.

The Obama administration’s vaunted “pivot to the Pacific” stopped somewhere between Fort Bragg and Australia, and there has been no significant resistance to China’s and North Korea’s antics until the Trump administration. The Afghan fiasco seemed to many to confirm China’s endless rise in the face of American impotence.

It is almost impossible to be optimistic that the Biden administration will show any disposition to assert the American national interest or seriously assist India (with whom the Chinese skirmish regularly), and Japan and other local resistance to Chinese aggrandizement. The spectacle of the environmental chief, John Kerry, pleading with China about climate change, an issue Beijing regards as a ludicrous irrelevancy, has been distressing.

Fortunately, the United States is fundamentally a much stronger country than China with a far superior group of natural allies. As long as it does not drive Russia into the arms of the Chinese, the next administration should be able to devise and implement an appropriate policy.

This is a manageable problem, but we may expect several years of continued floundering and posturing, which should put America in the right mood for a return to serious and carefully conceived and executed foreign policy starting in about three years. The lengthy preoccupation with Afghanistan has been as great a foreign policy failure as the reflexive isolationism of the 1920’s and early thirties that preceded the 50 years of generally successful strategic policy that led to victory in World War II and the Cold War.