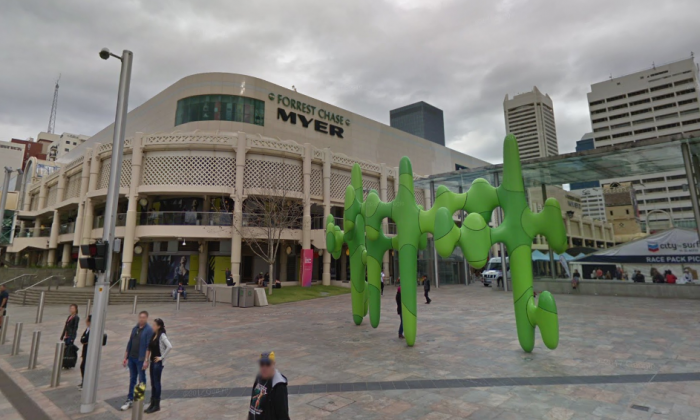 Indigenous teen Jaylen Garlett, 16, was looking for a shirt at a department store in Perth, Western Australia when staff and security were called to the fitting room the teen was in. (Screenshot via Google Maps)
Australia

A father in Western Australia has accused a Perth department store of racial profiling after the store called security on his 16-year-old son who was shopping for clothes for a school formal.

Jaylen Garlett, 16, and his father, Shem Garlett, were looking for a shirt and accessories for the teen’s school formal on Thursday, March 8, at the Forrest Chase Myer in Perth’s central business district.

The teen’s father left his son alone briefly in the change rooms in order to make a phone call when he heard a call over the store’s intercom for security to attend the men’s formal wear fitting room.

Shem said since his son was still in that fitting room he became worried and returned to see whether his son was alright. When he got there, he saw about 10 staff — including security — congregated at his son’s fitting room.

“I asked the lady at the service desk if everything was ok. She told me that there was a boy unaccompanied in the change rooms that didn’t have anything to try on so she called security,” Shem wrote in his formal letter of complaint to the department store that he posted on Facebook on March 13.

“I advised the lady that she had called a security alert for my son and explained he was alone in the change room because was waiting for [the shop assistant] to get another shirt for him to try on.

“She seemed stunned so I asked her why she called security for my son. She told me that last week a purse was taken from the service area, expecting me to understand.

“I asked what this had to do with my son, but no response.”

Shem said he suggested to her that she was racially profiling his son because “the only thing she would have noticed was a young Aboriginal man, in her mind, appearing to be in the wrong place.”

The concerned father said the shop assistant had no grounds for making the call for security over the intercom because she did not witness at any crime being committed.

“Everyone looked confused and embarrassed when they saw [the other shop assistant] accompanying us to the other service desk to finalise our purchases,” he said.

“We spent more than $200 on a shirt and accessories but I was tempted to just walk away,” he added.

Shem said what happened to his son was not an isolated incident.

“This is not an isolated incident as many of my Aboriginal friends and family have shared similar experiences of being racially profiled and harassed by security when shopping,” he said.

Myer told the ABC that they have met with the family and apologised for the incident.

“Myer has looked into this matter, which came about due to a misunderstanding between team members when the customer entered the change rooms without any clothing items. There were no other factors involved.”

The father said he was overwhelmed by the support he received from people online, reported 9News.

“It means the conversation is open. It’s an opportunity to see how this actually affects Aboriginal people.”

Many social media users have commented on Shem’s post and expressed support for his family.

In a similar case last month, former NRL South Sydney player Joe Williams accused security staff at a Sydney David Jones store for racially profiling his children, reported ABC. He said his 13-year-old son Brodi, 12-year-old niece Deminika, and his daughter Phoenix were shopping with their grandmother when they were stalked by security at the high-end department store.

Today, my own children aged 11 & 13, along with my 12 yr old niece; followed continuously around @DavidJonesStore Syd city by security; all this witnessed by my mother..

A blatant case of racial profiling!!! Shame on you #DavidJones followed for having dark skin!! @IndigenousX

David Jones has since apologised for the incident, reported the news broadcaster.