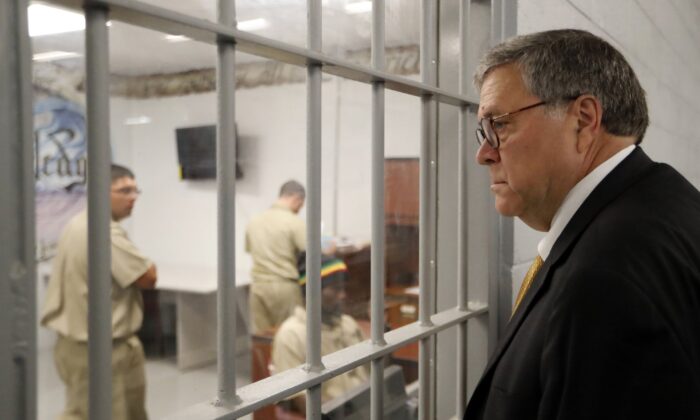 Attorney General William Barr watches as inmates work in a computer class during a tour of a federal prison in Edgefield, S.C., on July 8, 2019. (John Bazemore/AP Photo)
US News

Department of Justice Revises How Inmate Risk is Assessed for ‘Fairer’ Process: Report

The Department of Justice (DOJ) on Jan. 15 announced it would be introducing a new system to assess whether an inmate is likely to re-offend after being released from prison, a move it says would make the process fairer, more effective, and transparent.

Attorney General William Barr described the updated system as “another milestone in implementing the First Step Act,” as it would help assess inmates and identify programs they may need to help reduce the risk of recidivism.

The First Step Act was signed into law by President Donald Trump in 2018 and won broad bipartisan support in Congress. It aims to reduce the sentences of low-level offenders and bolster programs to help reduce high rates of recidivism.

Nearly all the 175,269 inmates in federal custody have been assessed by the federal Bureau of Prisons (BOP), however the DOJ says it now plans to re-screen them under the new guidelines in an attempt to reduce potential bias and more accurately measure an inmate’s change behind bars.

In a release on its website, the DOJ states the inmates will be be assigned to participate in “evidence-based recidivism reduction programs and productive activities” based on an initial needs assessment conducted by the BOP.

Under the First Step Act, inmates who participate and complete the assigned programs and activities may be placed in pre-release custody or have a 12-month sentence reduction, according to the DOJ. A list of the available programs will be published on the BOP’s website, it states.

Although all the inmates will be re-screened, officials do not expect to see major changes in the risk levels of inmates. Nonetheless, officials believe the change is an important step to ensure a fairer and more transparent process.

President Donald Trump has promoted the assessments as part of a rare bipartisan effort to address concerns that too many Americans were imprisoned for nonviolent crimes as a result of the drug war. The law gives judges more discretion when sentencing some drug offenders, eases mandatory minimum sentences, and encourages inmates to participate in programs designed to reduce their risk of re-offending, with credits that can be used to gain an earlier release.

Prior to the system update, inmates were screened using an assessment tool released July last year, known as the Prisoner Assessment Tool Targeting Estimated Risk and Need (PATTERN), which aimed to measure the risk of recidivism of inmates.

The updated measures include added psychology treatment programs, and the removal of the age of first arrest, conviction, and voluntary surrender. The assessment will also no longer look at whether an inmate participated in education or drug treatment programs.

“Beginning today, inmates will have even greater incentive to participate in evidence-based programs that prepare them for productive lives after incarceration. This is what Congress intended with this bipartisan bill,” Barr said in a statement.

“The First Step Act is an important reform to our criminal justice system, and the Department of Justice is committed to implementing the act fully and fairly,” he added.

More than 2,400 federal inmates have won court approval for reduced prison sentences under the First Step Act, the DOJ said on Wednesday.