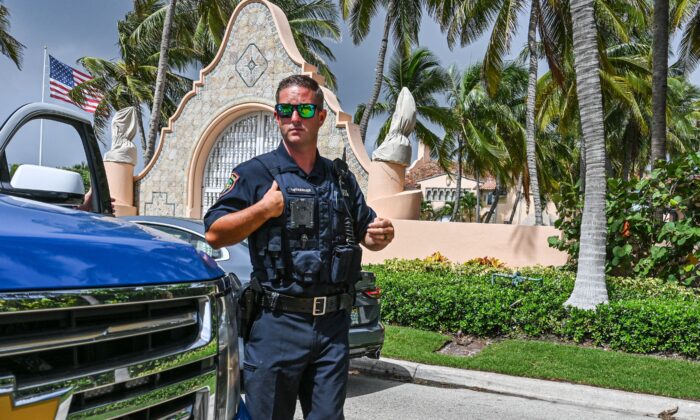 Update: The government was ordered to release the redacted copy of the affidavit.

The U.S. Department of Justice (DOJ) has filed with a federal court proposed redactions to a document that led to former President Donald Trump’s home being raided, the latest step in a process that could see the document released to the public.

Government lawyers filed the proposed redactions to the search warrant affidavit under seal just before the deadline to do so on Aug. 25, an update on the court’s docket indicated.

“The United States has filed a submission under seal per the Court’s order of Aug. 22,” a DOJ spokesperson told news outlets in a statement.

U.S. Magistrate Judge Bruce Reinhart, who approved the warrant for the Mar-a-Lago raid based on the affidavit, is considering whether to make any form of the document public.

Government officials want the entire document kept under seal, or secret. They claim that redactions needed to protect the integrity of the investigation into Trump and the privacy of individuals involved—including FBI agents and witnesses—are so extensive that the resulting product would have nothing of value.

A slew of media organizations and nonprofits disagree, arguing that the public interest means some form of the document should be released, and that the government hasn’t proven its case—an argument with which Reinhart has sided, at least for now.

The judge on Aug. 22 ordered the government to file under seal possible redactions by noon on Aug. 25. He also said DOJ lawyers could provide additional evidence or legal argument buttressing their position.

Affidavits are sworn statements used in court. The affidavit was authored by an FBI agent, whose name has been withheld. It was presented to Reinhart on Aug. 5. Within hours, he approved the warrant to raid Mar-a-Lago. The warrant was served on Aug. 8.

According to unsealed documents in the case, the government has reason to believe Trump violated three laws, including one barring the destruction, alteration, or falsification of records in federal investigations.

Government officials supported unsealing the warrant itself and several attachments, including lists of items agents took from Trump’s home in Florida. But they have said releasing the affidavit would jeopardize the investigation.

The outlets and nonprofits, including Judicial Watch, say the public interest means the document should be made public, even if some redactions are made.

Reinhart said in a recent hearing that he will review the proposed redactions and decide whether they are proper. If they are, he will order the affidavit released. But if he doesn’t agree, he will strike some of the redactions. In that case, he will give the government the opportunity to appeal to a higher court, and delay the release of the affidavit.

Reinhart has also left open not releasing the document at all.

“I cannot say at this point that partial redactions will be so extensive that they will result in a meaningless disclosure, but I may ultimately reach that conclusion after hearing further from the Government,” he said.