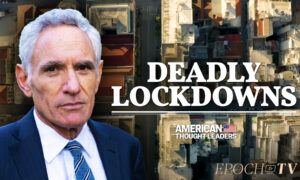 Dr. Scott Atlas: Lockdowns Not Only a ‘Heinous Abuse’ of Power, They Also Failed to Protect the Elderly
0
Share Now
TelegramFacebookTweetEmailTellMeWeReddit
Copy Link

The Department of Justice has chosen not to investigate how the governors of Michigan and Pennsylvania ordered nursing homes to accept residents who had tested positive for COVID-19.

Steven Rosenbaum, a top Department of Justice (DOJ) official, wrote letters on July 22 to the offices of Michigan Gov. Gretchen Whitmer and Pennsylvania Gov. Tom Wolf, both Democrats, to inform them of the decision.

“We have reviewed the information you provided along with additional information available to the Department. Based on that review, we have decided not to open a CRIPA investigation of any public nursing facility within Michigan at this time,” Rosenbaum informed Whitmer in the letter, which was obtained by The Epoch Times. CRIPA refers to the Civil Rights of Institutionalized Persons Act.

“If we were to open a CRIPA investigation at a later date, we would follow the procedures required by CRIPA, which includes written notice to the jurisdiction.”

A similar missive was sent to Wolf’s office, the Associated Press reported.

The DOJ in August 2020 requested data from the governors of Michigan, Pennsylvania, New York, and New Jersey regarding how the governors ordered nursing homes to accept COVID-positive residents despite concerns from a variety of groups and officials about the policies potentially leading to more deaths.

“Protecting the rights of some of society’s most vulnerable members, including elderly nursing home residents, is one of our country’s most important obligations,” Assistant Attorney General for Civil Rights Division Eric Dreiband said at the time. “We must ensure they are adequately cared for with dignity and respect and not unnecessarily put at risk.”

The governors of New Jersey and New York have apparently not received letters like the ones sent to Whitmer and Wolf. Spokespersons for New Jersey Gov. Phil Murphy referred comment to the Department of Justice, which did not respond to an inquiry. The office of New York Gov. Andrew Cuomo didn’t respond to a request for comment. Both Murphy and Cuomo are Democrats.

Large percentages of people who died from COVID-19 in the four states resided in nursing homes and other long-term care facilities, including about 3 out of 10 in Michigan—which may be an undercount.

Michigan’s attorney general, also a Democrat, previously rejected calls for a probe into the Whitmer administration’s policy, though the accuracy of the death count is being investigated by Michigan Auditor General Doug Ringler.

Bobby Leddy, a spokesman for Whitmer, said in a statement to outlets that “at no point were nursing homes ever forced to take COVID-positive patients.”

“Instead, we made the smart decision to require that residents who contracted this deadly disease be kept as far away from others as possible to prevent more people from getting sick,” he said.

Wolf’s office didn’t pick up the phone or return a voicemail.

“The good thing is that the general auditor and the Republican House are there to make sure that the people of Michigan have a proper accounting of nursing home deaths,” Johnson said.

A probe in New York by Attorney General Letitia James, a Democrat, found a severe undercount in the number of nursing home resident deaths from COVID-19, which helped stoke calls for Cuomo to resign along with multiple sexual misconduct allegations. Cuomo has refused to step down.

James said it wasn’t clear whether the state’s policy forcing nursing homes to take back COVID-positive residents led to an increase in deaths.

The Pennsylvania House Government Oversight Committee is probing how the Wolf administration handled nursing homes during the pandemic.

No investigations of state officials appear to have taken place in New Jersey.

Officials in Pennsylvania and New Jersey announced last year that they would start investigating nursing homes themselves amid the climbing death toll in the facilities.

Pennsylvania Attorney General Josh Shapiro said then that people could be charged.

“We will hold nursing facilities and caretakers criminally accountable if they fail to properly provide care to our loved ones,” the Democrat said. “While we salute and appreciate nursing home staff on the front lines during this pandemic, we will not tolerate those who mistreat our seniors and break the law.”