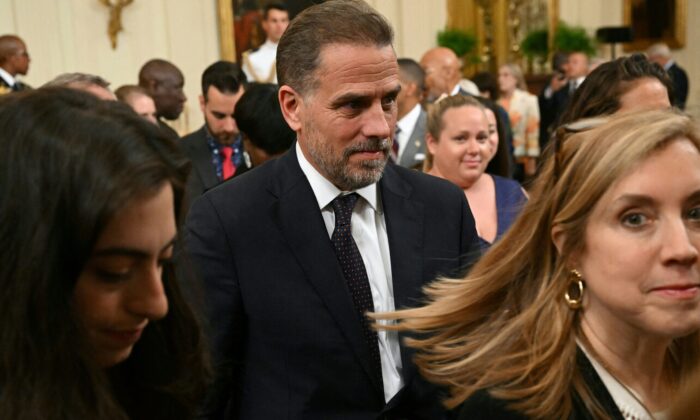 Hunter Biden, son of President Joe Biden, attends the ceremony for the Presidential Medal of Freedom, the nation's highest civilian honor, during a ceremony honoring 17 recipients, in the East Room of the White House in Washington, on July 7, 2022. (Saul Loeb/AFP via Getty Images)
Executive Branch

The advocacy group Judicial Watch has filed a Freedom of Information Act (FOIA) lawsuit to obtain records from the Secret Service related to an alleged gun incident involving Hunter Biden in Delaware in 2018.

The lawsuit, filed on Sept. 19 (pdf) in the U.S. District Court for the District of Columbia, noted that Judicial Watch filed its first FOIA request in March 2021, following reports that Hunter Biden’s sister-in-law, Hallie Biden, threw his handgun in a trash container in Delaware. After that request was filed, the Secret Service denied involvement and declined to hand over records in connection with the incident.

The latest complaint is asking the Department of Homeland Security (DHS) for Secret Service records in connection to the alleged incident and is seeking relevant “reports, telephone logs, witness statements, and memoranda,” as well as messages between Secret Service officials and others.

Text messages from Hunter Biden’s laptop show that he criticized Hallie after learning that she had tossed his gun in the trash, according to reports. He said the incident is now “in the hands of the FBI” and said that the FBI opened an investigation into him after the alleged incident.

Other text messages suggest that the Secret Service, an agency under DHS, got involved in response to the gun incident.

“Beau owned a handgun issued by the state and I[t] was in the front glove compartment of his car. So [expletive] you … What right do you [expletive] have Hallie,” Hunter reportedly wrote in October 2018 to Hallie. “There are 5 guns in dads house. There are [expletive] more weapons in your sons room then in an armory.”

After Hunter Biden’s gun reportedly went missing, no charges were brought and no arrests were made.

“The Secret Service and the Biden administration apparently are in cover-up mode for Hunter Biden,” Judicial Watch President Tom Fitton said in a statement on Sept. 20.

“Whether it’s Hunter Biden’s laptop, his business practices and travel, or these documents related to the careless disposal of a gun in a dumpster near a high school, this administration continues to put up unlawful roadblocks to any effort to investigate the activities of the Biden family, particularly Hunter.”

The Judicial Watch lawsuit comes a week after a judge in another case ruled that the Bureau of Alcohol, Tobacco, Firearms, and Explosives (ATF) doesn’t have to release records related to the disappearance of a gun from a vehicle owned by Hunter Biden.

In the ATF lawsuit, an Ohio-based reporter named David Codrea had asked the bureau in 2020 for the records, which are believed to include a form Hunter Biden had submitted while purchasing a firearm in 2018. Codrea cited a report from The Blaze, and Politico later reported on the situation as well.

Department of Homeland Security officials didn’t respond by press time to a request for comment.