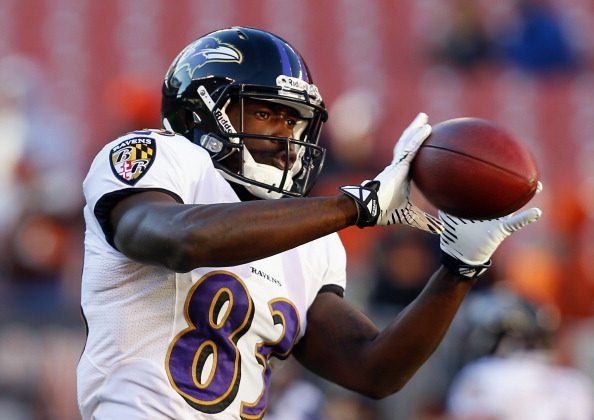 Wide receiver Deonte Thompson #83 of the Baltimore Ravens catches a pass before their game against the Cleveland Browns at FirstEnergy Stadium on November 3, 2013 in Cleveland, Ohio. (Photo by Matt Sullivan/Getty Images)
Tech

A fake report says that Baltimore Ravens wide receiver Deonte Thompson was arrested after allegedly getting high on the hallucinogenic drug PCP.

The article was posted on Empire Sports, a satire sports news website.

“Fans of Baltimore Ravens wide receiver Deonte Thompson got the opportunity to see him in all of his glory on Wednesday evening,” it says. “Thompson was arrested after climbing on top of a an SUV, removing all of his clothing then taunting police officers as they tried to talk him down. Police believe he was likely high on PCP at the time.”

“Empire Sports is a satirical and entertainment website,” it says. “Empire Sports uses invented names in all its stories, except in cases when public figures are being satirized. Any other use of real names is accidental and coincidental.”

ATLANTIC CITY, N.J. (AP) — Baltimore Ravens running back Ray Rice has been indicted on a charge he assaulted his fiancee in an elevator at casino in Atlantic City, N.J.

Rice had been charged with simple assault after police said he knocked out Janay Palmer on Feb. 15 at the Revel Casino. But a grand jury indicted him Thursday on a more serious count of aggravated assault. It carries a three-to-five-year sentence.

Palmer also had been charged with simple assault. Prosecutors say that complaint was dismissed.

The couple lives in the Baltimore suburb of Reistertown.

Palmer’s attorney has said he’s certain no crime was committed. Rice’s attorney, Michael Diamondstein, says Rice denies the charge and that the couple are happy and in counseling.

The Ravens issued a statement saying “we know there is more to Ray Rice than this one incident.”