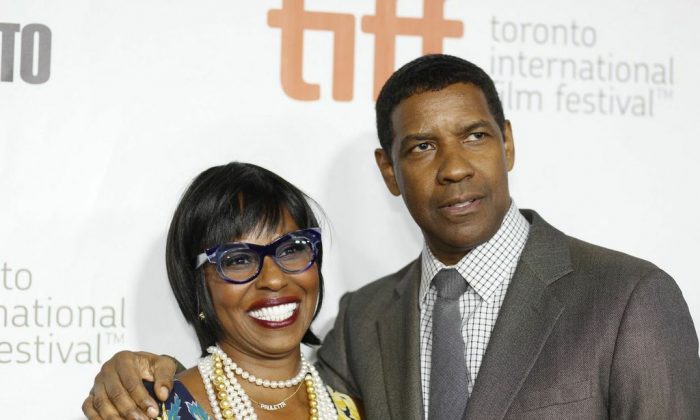 TORONTO—Actor Denzel Washington received a warm welcome from his fans on Sunday night as he exited his car to the sound of hundreds of fans chanting “Denzel! Denzel!”

During the red carpet premiere of his latest action thriller “The Equalizer” which premiered at the Toronto International Film Festival (TIFF) on September 7, 2014, Washington remembered the first time he visited the northern city.

“I first came to Toronto years ago to see my wife singing in a show,” he said, while his wife, Paulette Washington, was standing right beside him and smiling. “I’m really not here for the festival, I’m here because she’s singing here Friday night,” Washington explained.

“I’ll be working the ticket booth,” he joked.

Washington plays an ex-CIA in “The Equalizer,” who lives a removed, routine life, until one day he faces a troubled young girl, Chloe Grace Moretz, soon finding out that she’s involved with the mafia. When the girl’s life is in danger, Washington seeks to avenge the helpless girl.

In his words, “The Equalizer” is a “great story, [with a] flawed character [who] suffers from post traumatic stress disorder,” he said.

The Hollywood veteran is however no stranger to Toronto as he lived in the city for a about a year all together, since he shot “John Q” and “The Hurricane” here.

He recalled the days when Toronto was a more quaint northern cousin of New York.