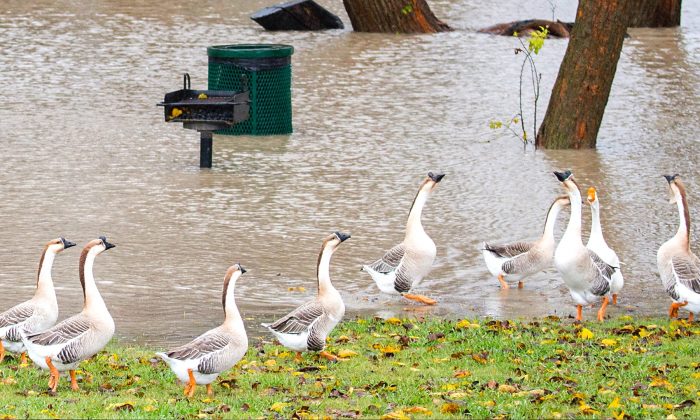 The city of Denver this month began to round up and kill geese to give as meat to families in need, in a bid to solve its geese population problem, according to official documents.

According to a goose management program released in June by Denver Parks and Recreation, the plans were introduced due to an increasing population of geese in the area.

It states controlling the population of roughly 5,000 geese living in the city year-round will cut down the estimated 5,000 pounds of waste from the animals Denver absorbs daily. It says these measures will then improve the condition of its lakes and ponds.

The report (pdf) states that the growing number of geese has resulted in “increasing numbers of conflicts with human activities and concerns related to human health and safety” and “human-goose conflicts.”

Employees from the U.S. Department of Agriculture’s (USDA) Wildlife Services division will be conducting the roundups, with meat from the birds being distributed to families in need in Denver’s neighboring counties, according to USDA biologist Kendra Cross.

Cross added that the bird meat will not be donated to families in the city and county of Denver itself, reported 9News.

Denver’s goose management program listed common issues raised by the public, which included the “unacceptable and potentially dangerous accumulation of feces on turf and pavement, goose aggression during nesting season, over grazing of landscape vegetation, and safety hazards for vehicles.”

Denver Parks & Recreation’s deputy executive director, Scott Gilmore, said the birds are being targeted now because they aren’t able to fly at this time of year, according to Fox 31.

“And they are getting processed, and they’re getting donated to needy families,” Gilmore said.

“The geese populations within the city have just exploded,” Gilmore added. “We get so many complaints about people coming out here with a blanket to sit on the grass, and they cannot sit on the grass because there’s so much goose poop in the parks.”

The strategy follows other attempts by the city to control its growing goose population. Denver Parks & Recreation has previously deployed methods such as egg oiling, hazing, and habitat management to cause discomfort to the geese, encouraging them to either leave the area, migrate, or relocate elsewhere.

Egg oiling, which has been used in the area since 2002, works by spraying 100 percent grade corn oil on goose eggs, which blocks the egg shell’s air passages and prevents the development of the embryo.

Speaking to the Fox 31 Problem Solvers of the new measures, one Washington Park resident said they didn’t see the growing number of geese in the area as an issue.

“I’ve been here many years, I don’t really see it as a problem. In fact, I think they’re kind of cute,” the resident said.

“This is crazy. I don’t know why somebody would want to do that,” another said.

Meanwhile, resident Belinda Begley told CBS Denver she believes donating the bird meat to the needy is the right thing to do.

“What a better thing to do with the geese then feed hungry people. There’s too many geese and too many hungry people, so it works out,” she said.

It is believed that milder winters in the region have led to an increase in the numbers of geese flocking to the city, and for longer periods of time, reported the Denver Channel.

The USDA told Fox 31 in a statement, “The resident goose population in this area is too large, which will cause many problems including overgrazing of grass, ornamental plants and agricultural crops; accumulation of droppings and feathers; disease, attacks on humans by aggressive birds; and the fouling of reservoirs, swimming areas, docks, lawns, and recreational areas.”