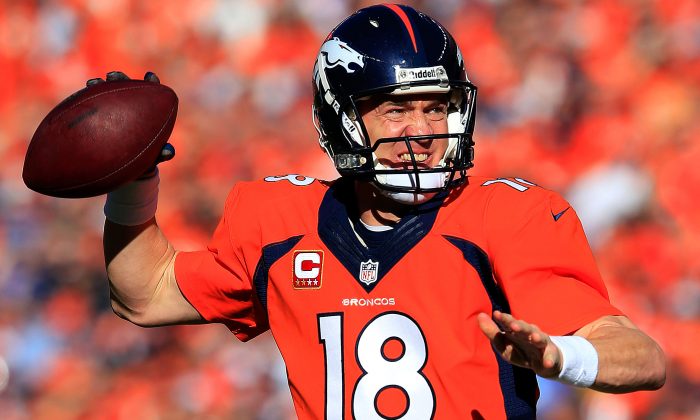 It is impossible to say too much about the Denver Broncos offense this season, but there really isn’t any reason to say a lot. Simply, they have the best offense in the history of football. So far they have been nearly unbeatable: 13–3 in the regular season and obviously, perfect so far in the off-season, with only one more game to go: The Super Bowl.

Peyton Manning led his team brilliantly to a 26–16 victory over the New England Patriots in the AFC Championship game at Mile-High Stadium this Sunday. He used short passes to set up longer passes, and when the Patriots were ready to stop the passing attack, he handed off for more yards.

Manning shows his worth on almost every play; he stalks up the the line, surveys the defense, and spews out a string of orders to change the blocking assignments and nullify the opposition. The ability to read the defense has to be unnerving; even if he isn’t right all the time—his confidence is so great, his opponents must feel that he is a mind-reader.

The Broncos’ offensive line did their job well, too. Manning was rarely hurried and never sacked. The protection let manning rack up 32 completions in 43 attempts for 400 yards, plus 107 yards rushing.

A great offense by itself wouldn’t get a team very far, but the Broncos defense proved its mettle, holding Tom Brady (who had held many of the records Peyton Manning broke this year) to only 24/38 completions for 277 yards, and only 68 yards rushing.

New England didn’t make it easy. This is an excellent team and they played well. The Broncos defense played just a little better on the few key plays which kept the Pats out of the Red Zone for most of the game.

On several drives Brady used his patented passing attack to chew up yards in huge bunches, but the Broncos pass rush managed to hurry him enough that he could only break through for two touchdowns. In the final few minutes of the game the Broncos let Brady run wild, but by that time it didn’t matter.

The Broncos have to be feeling good about their chances in the Super Bowl. Their offense is a juggernaut; they will get their points. Their defense is good enough, and the longer Manning and the offense can stay on the field, the less the defense matters—though in the Super Bowl, the defense had better be ready to play four quarters

Second Half: Broncos on Fire From the Start

The Broncos started the second half with the ball and the momentum, and they made the most of the combination. Peyton Manning started running his high-speed, no-huddle offense, completing seven and wearing out the New England defense with an eight-minute, 16-play drive which ended with another touchdown, putting Denver up 17–3.

The Pats couldn’t get near Manning, the Broncos gave their quarterback time to find targets short and long, while Montee Ball and Knowshon Moreno ran often enough to keep the New England defense honest. Manning showed his mastery of the game by deciphering and countering the Patriots defense with audibles on almost every play.

Tom Brady took the field knowing he had to do a lot and do it quickly, and he started out doing just that. In twelve plays he took the Patriots form their own 20 to the Denver 29, but there the drive stalled. New England went for it on fourth-and-two and got sacked for the second time in the game.

Manning led the Broncos downfield once again but this time couldn’t convert from the two-yard line as Julius Thomas dropped the ball in the end zone—only the second incomplete pass in 22 attempts. Matt Prater kicked the easy field goal and the Broncos had a 23–3 lead with 12 minutes left.

Bad news for the Broncos, though—Knowshon Moreno hurt his ribs and headed to the locker room. If he is not ready for the Super Bowl, he will be sorely missed.

Tom Brady showed that he had fight left in him, leading his team downfield 80 yards in nine plays for a touchdown, Down 13 with nine minutes left, the game was still up in the air—unless Peyton Manning engineered another seven-minute scoring drive.

Which he almost did. Denver couldn’t capitalize in its field position; New England stopped Denver after only thirty yards gained, forcing yet another field goal. This kep the game to two scores, and kept New England’s chances alive.

Brady worked fast when he got the ball back, marching downfield 80 yards in four minutes and running it in himself. The two-point conversion attempt failed, though, keeping the Broncos two scores up.

And that’s how it ended. Manning took the team down to the New England 12-yard line and time ran out—if he had really wanted to, he probably could have scored again on the final drive.

The Denver Broncos are headed to the Super Bowl.