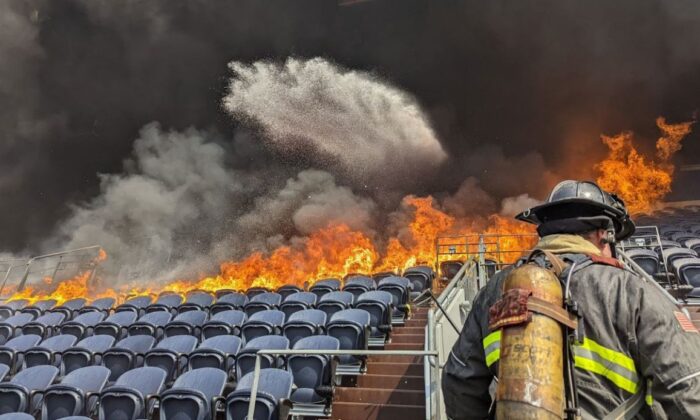 Authorities in Denver, Colorado, confirmed a fire at Empower Field at Mile High on Thursday. There were no injuries and the fire was later put out.

“Sprinklers attempted to stop the fire, but firefighters were needed to complete extinguishment. Heavy fire & smoke was found on our arrival,” the Denver Fire Department wrote on Twitter.

#DenverFireDepartment crews are extinguishing a fire at Mile high stadium, 1701 Bryant. Unknown cause at this time, but fire affected has affected the suite are and the third level seating area. pic.twitter.com/vjnLaQg55X

Fire now under control at Mile high Stadium. Sprinklers attempted to stop the fire, but firefighters were needed to complete extinguishment. Heavy fire & smoke was found on our arrival media briefing to take place at 3:00 p.m. on east side of stadium. @DenSafetyDept @CityofDenver pic.twitter.com/7AjPg1x1AN

The cause of the fire is unknown, said the fire department.

Stadium officials said in a statement on Twitter that the fire occurred in a construction zone near the East Club Lounge. About 100 people were attending an event on the second level, but the stadium was otherwise empty.

Capt. Greg Pixley, a spokesman for the fire department, said it appears the fire originated in the suite and spread to the seats, which are made of plastic.

“This type of plastic that the seats are composed of burns with not only significant ferocity … but also produces a tremendous amount of black smoke,” he said.