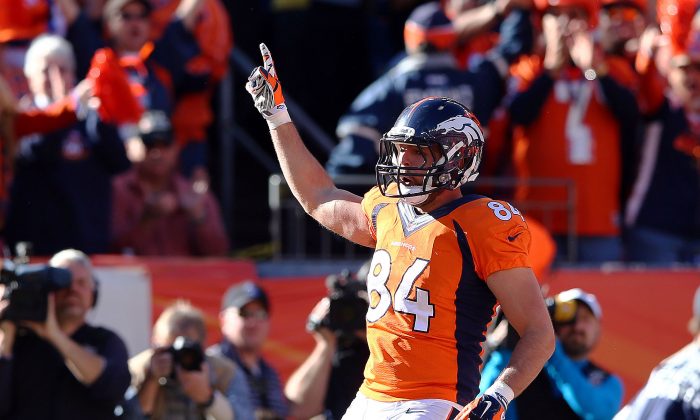 The Denver Broncos had the edge in both offense and defense in the first half of their AFC title matchup against the New England Patriots from Sports Authority Field at Mile High Stadium in Denver, Colorado Sunday afternoon.

In the division playoff against San Diego, Denver QB Peyton Manning was the force which drove Denver to victory. He played a huge role in the first half of this Sunday’s game, but his front line and receivers deserved a lot of the credit—the Denver passing attack was unstoppable because Manning had time, and his receiver didn’t drop any key passes.

For the first time in the playoffs, the weather didn’t limit the passing attacks of Denver QB Peyton Manning or Patriots play-caller Tom Brady. The day was clear and windless, optimal conditions for two of the better passers in the game. After three weeks of being forced to run, both teams finally could unleash their full aerial attacks.

Denver started off by stopping the first two Patriots drives; pats QB Tom Brady and company went three-and-out twice. Denver did a little better on offense, getting a first down, but the Patriots’ pass coverage forced a Denver punt.

Denver QB Peyton Manning had plenty of time to find targets, and he had a lot of luck with short passes which led to a lot of yards-after-catch. Good thing too, because Denver couldn’t gain a yard on the ground. The short passes paid off though as Peyton Manning caught the pats looking short and hit Demaryius Thomas for 29 and then Eric Decker for 19 to give the Broncos fist-and-goal at the ten.

The Patriots’ defense held Denver to a field goal, but had yet to get into Broncos territory.

Tom Brady changed that on the first play of the next drive, throwing to Shane Vereen, who ran for 24. A couple of plays later Brady hit Julian Edelman for 18. As Peyton Manning did when Denver had the ball, Tom Brady had all the time he needed in the pocket

Time wasn’t enough. A call for offensive pass interference left the Pats at 4th-and 16 and punting to start the second quarter.

The Broncos started the second quarter by finally getting some yards rushing, with Knowshon Moreno finding a whole and gaining 11. The Patriots started pressuring Manning, but Manning stayed cool and kept hitting short passes, with the occasional run to catch the Pats off guard.

Another penalty changed the momentum, but this one favored the Broncos—defensive holding gave Denver a new set of downs.

Manning took advantage of the Pat thinking pass on third-and-ten with a 28-yard draw play to Knowshon Moreno to the New England 11. It took three downs to get to first-and-goal at the one, but only one more manning pass to get Denver the first touchdown of the game. Again, New England was totally committed to stopping the run, and Manning had myriad targets and chose a wide-open Jacob Tamme.

New England cornerback Aqib Talib sustained a game-ending rib injury early in this drive, an injury which could have an impact later in the game.

This was Denver’s longest drive of the season, moving 93 yards in 16 plays and seven minutes, converting three third-downs and taking a 10–0 lead halfway through the second quarter. So far the patriots had only managed two first downs.

Either the Denver TD had lit a fire under Tom Brady or the coaches did, because the New England QB came out in his “Master of the Universe” guise.

Brady started the next drive by going long to Aaron Dobson. Dobson faked going deep, the stopped suddenly, spun, and caught the Brady missile for 27 yards. Shane Vereen then stretched a screen pass 13 yards into Denver territory. Another pass to Michael Hoomanawanui gained the Patriots another 15 yards to reach the Red Zone.

A failed run by Legarrette Blount (six yards in five carries to this point) and a missed pass left the Patriots facing third-and-eight at the Denver 19. Here the Denver defense came through, sacking Brady for 11 yards and forces a field goal.

Denver had a chance to increase its lead but a holding call sent the Broncos back to their own ten with two minutes left in the half.

Manning came out firing in the final two minutes, hitting Demaryius Thomas for 26 and 27, then André Caldwell for 11. Thomas would normally have been covered by Talib; possible the pats CB’s absence cost the pats some points here.

New England didn’t collapse; they stopped the Broncos 17 yards from goal line and forced a field goal. Better than a TD, but still, the kick made it a two-score game.

Brady took the field with 25 seconds left to try to narrow the gap but he didn’t have enough time. The half ended with Denver having dominated.