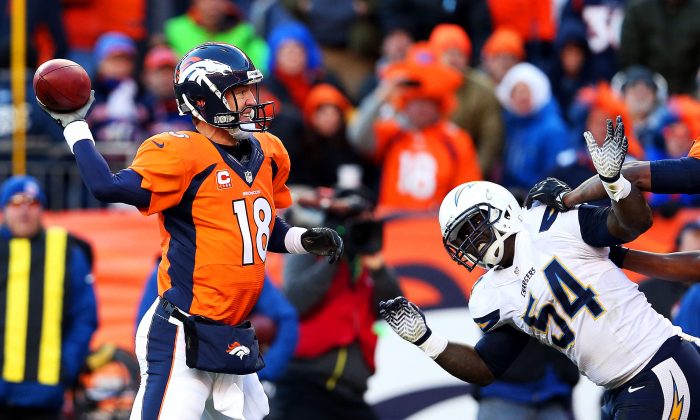 Peyton Manning #18 of the Denver Broncos looks to pass under pressure from Melvin Ingram #54 of the San Diego Chargers during the AFC Divisional Playoff Game at Sports Authority Field at Mile High on January 12, 2014 in Denver, Colorado. (Christian Petersen/Getty Images)
NFL

The Denver Broncos once again proved that having the best offense in NFL history is a huge asset. While the Broncos didn’t blow the San Diego Chargers off the field, the Peyton-Manning-led offense did keep the game firmly in the grip of the Broncos.

The Chargers exposed some of the weaknesses in the Denver defense, but by the time San Diego figured out how to handle the Broncos, the game was decided. Had the Chargers gotten rolling earlier in the game, and had they not helped Manning with a several silly penalties, the game could have gone the other way.

San Diego actually outplayed the Broncos in the final quarter, but after three quarters of losing, they didn’t have time to secure the win.

The second half started with more of the inexorable Denver advance that defined the first half. Peyton Manning again mixed runs and passes, but this time the drive ended with Wes Welker dropping a pass at the two-yard line, forcing a Denver field goal.

While not a touchdown, the three points made it a three-score game. However, it still counted as a bright moment for the Chargers.

Phillip Rivers started the second half with a Peyton-Manning-style no-huddle offense, but the Denver defense—and the intense crowd noise—nullified the gambit.

The Chargers front line started to figure out the Denver attack and gained Rivers some extra time to find receivers. The Chargers receivers started getting open, and San Diego made some gains, until the drive was stifled by a third-down offensive pass interference call. Rivers went for it on third-and-18 but a wide-open Ladarius Green let the pass go through his hands.

Peyton Manning retook the field and again asserted his will he continued to draw the Chargers linemen offside with his tricky snap count, and continued to chew up the field, and foe the second time forced Denver to kick for three.

The wind and the distance conspired to drive the kick wide—finally the Chargers had held the Broncos scoreless on a drive. The third quarter ended with the Broncos ahead 17–0.

The Chargers picked up where they had left off on their last drive, giving Rivers more time and more targets and this time San Diego made use of its opportunities. Rivers hit Eddie Royal for 30 yards, then found Keenan Allen in the end zone to finally get San Diego on the scoreboard.

Trindon Holliday almost ended the Chargers’ momentum with a 105-yard kickoff runback, but a penalty for blocking in the back brought the ball back to the Denver 29.

Too Little, Too Late

Inspired by the TD, the Chargers defense came out playing hard, and almost forced a three-and-out until both a hold and pass interference call on the third-down play brought the ball to the Denver 45.

Even the fired-up Chargers defense couldn’t derail the Manning train. The veteran QB came to the line shouting orders like a general, adjusting each play several times before finally calling for the snap, and usually he found a way to get the ball to a receiver—and when he handed off, the runners tore out huge chunks of yardage from a defense looking for the pass.

While the defense watched the receivers, Knowshon Moreno bulled his way into the end zone to make the score 24–7 with eight minutes left in the game.

The Chargers got rolling—finally—and went straight downfield to score another touchdown. Rivers had time to throw thanks to his offensive line, and had targets, thanks to his receivers.

Whether the Broncos were relaxing, thinking they had the game won, or were tiring, either way the Chargers were finally finding the Denver weak spots.

A gutsy 49-yard pass to Keenan Allen on fourth down kept the Chargers drive alive, and led to a 16-yard TD pass to Allen again.

The Chargers kept the momentum rolling by recovering their own onside kick. This gave San Diego the ball on its own 40 with two time-outs and five-and-a-half minutes on the clock, but Denver held San Diego to a field goal.

The Chargers nearly stopped Manning on Denver’s final drive, but a blown coverage on third-and-17 gave Denver another chance. Manning didn’t waste the chance; he gained three more first downs and ended the game on a knee.

The Chargers showed up to play, but not until they were 17 points down. Once they started playing, they showed that the broncos have some serious flaws.

The Broncos’ win sets up an AFC Championship match between Denver and the New England Patriots—and between their two legendary quarterbacks, Peyton Manning and Tom Brady

Tom Brady and Peyton Manning are two of the most productive quarterbacks in NFL history, but as Peyton Manning told CBS-TV after he game, “It’s the Broncos versus the Patriots.

“Certainly Tom and I have played against each other a lot but when you get to the AFC championship, it’s about two good teams that have been through a lot to get there so there. I know it will be a heck of a game.”

It will be the Broncos against the Patriots, as well as Manning against Brady. It will also be the Broncos’ John Fox against New England’s coach, Bill Belichick, and that is not a match-up many would give to Fox.

If the Broncos don’t improve their defense before their meeting with the Patriots next week, they will find their faults exploited from the first series. New England’s offense and defense are rated lower than San Diego’s, but Bill Belichick has probably already devised several ways to crack the Broncos.

Denver can’t expect New England to help the Broncos by jumping offsides or committing other avoidable penalties. Nor will New England wait until the final quarter to start playing their best. Further, New England’s ground game will eat up the clock and keep Denver’s defense on the field, while most of Denver’s drives against San Diego were only five minutes long.

The game really won’t be all about Manning versus Brady. It will be, as Peyton Manning insisted, about two strong teams—and two good coaches. As Manning said, “It will be a heck of a game.”