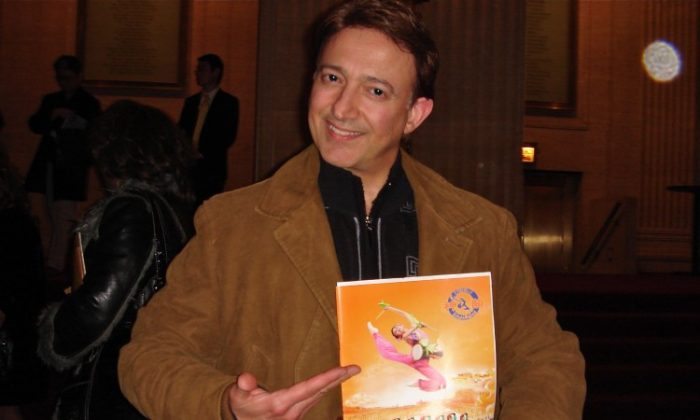 Dr. James Lago, a dentist by profession who also owns a number of other businesses, was counted amidst the crowded theater enjoying the presentation.

Dr. Lagos said he had always been interested in Asian culture because “the women are beautiful.” He was seeing the New York-based Shen Yun for the very first time.

Shen Yun, one of three companies traveling to more than 100 cities across four continents, has a full orchestral ensemble playing a unique fusion of ancient Eastern and Western arrangements.

The dancers depict a collection of stories from ancient times to the China of today.

And each of the company’s members—dancers, vocalists, solo musicians and support staff included—carries one thought: to reawaken China’s 5,000-year-old divinely-bestowed cultural heritage, desecrated after six decades of communism.

Dr. Lagos immensely enjoyed the humor of the dance Joyful Little Monks. “It just seemed like they were having a lot of fun, being mischievous like children would be,” he said.

However, the dance Snowflakes Welcoming Spring, captured his heart.

“But again, the women were beautiful. And I was very infatuated, too, by the way they use the snow… [sequined handkerchiefs]. Yes, I thought that would be fun to do in the park.”

But Dr. Lagos raised an eyebrow when seeing a couple of dramatizations exposing the ongoing brutal persecution of the spiritual practice Falun Gong, banned in China since 1999.

Dr. Lagos said he had visited China when it first was “polluted by the Western philosophies”
and communism and while there, became “completely in awe of the culture.” He has hope for a better future for Chinese societies.

Recalling Shen Yun’s grand finale, Before Disaster, the Divine is Rescuing, he wrapped up with the following words: “It was very calming, the way they ended … and it gave hope that good will always win over evil.”

Upcoming performances in the United States include Chattanooga, Tennessee, on April 24, and Columbus, Ohio, on April 26 and April 27.