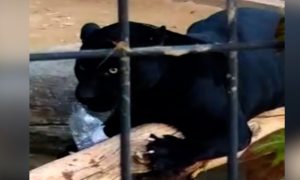 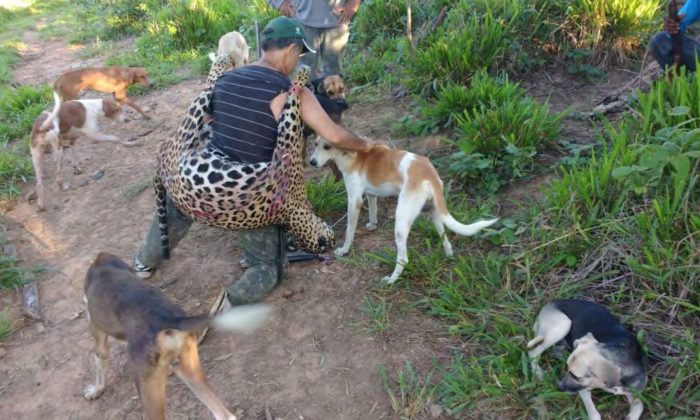 Authorities in Brazil have broken up a gang of alleged poachers accused of killing thousands of endangered animals, including red brocket deer, collared peccary, and jaguars.

One of the poachers is allegedly a dentist who killed over 1,000 protected jaguars, according to two separate criminal complaints filed by the Federal Public Prosecutor’s Office (MPF)—one for illegal hunting (pdf) and another for the use of a firearm without a permit (pdf).

The dentist, identified as Temistocles Barbosa Freire, was one of seven men arrested in the country’s northwestern state of Acre following a sting operation involving wiretapping, monitoring cell phone communications, and collecting photo and video evidence of endangered animals being killed.

Local reports say Freire was the longest-serving member of the gang. An image contained in the criminal complaints purportedly shows Freire carrying a dead jaguar on his back as hunting dogs surround him.

The NGO added that in just three months of monitoring there were 11 incidents of poaching, involving the killing of 8 jaguars, 13 capybaras, 10 hounds, and 2 deer.

If convicted, the poaching gang members could face punishment in the form of fines and prison sentences.

The incident recalls the case of American dentist Walter Palmer, who killed Cecil the Lion, a male lion that lived in the Hwange National Park in Zimbabwe, sparking a global backlash.

The Minnesota dentist spent more than a month out of sight in 2015 after becoming the target of protests and threats following the lion’s death.

Palmer was interviewed jointly by The Associated Press and the Minneapolis Star Tribune, saying that he believed he acted legally when he took down the lion and that he was stunned to find out his hunting party had killed one of Zimbabwe’s treasured animals.

“If I had known this lion had a name and was important to the country or a study obviously I wouldn’t have taken it,” Palmer said at the time. “Nobody in our hunting party knew before or after the name of this lion.”

Cecil was a fixture in the vast Hwange National Park and had been fitted with a GPS collar as part of Oxford University lion research. Palmer said he shot the big cat with the black mane using an arrow from his compound bow outside the park’s borders but it didn’t die immediately.

He disputed conservationist accounts that the wounded lion wandered for 40 hours and was finished off with a gun, saying it was tracked down the next day and killed with an arrow.

The case garnered widespread attention, with late-night talk show host Jimmy Kimmel famously shedding tears over the lion’s death. Kimmel asked viewers to donate to Oxford’s Wildlife Conservation Research Unit (Wildcru), the research group that had installed a radio collar on the lion and had the animal under observation.

“I think it’s arguable that this is the biggest global response to a wildlife story there’s ever been,” said Wildcru Director David Macdonald, according to National Geographic. “I think all those people were exhibiting an interest not just in lions but in conservation more widely.”

Cecil’s killing set off a fierce debate over trophy hunting in Africa. Zimbabwe tightened regulations for lion, elephant, and leopard hunting after the incident, and three major U.S. airlines changed policies to ban shipment of the trophies.