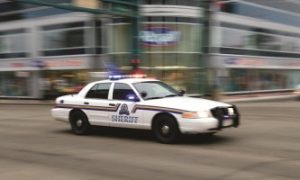 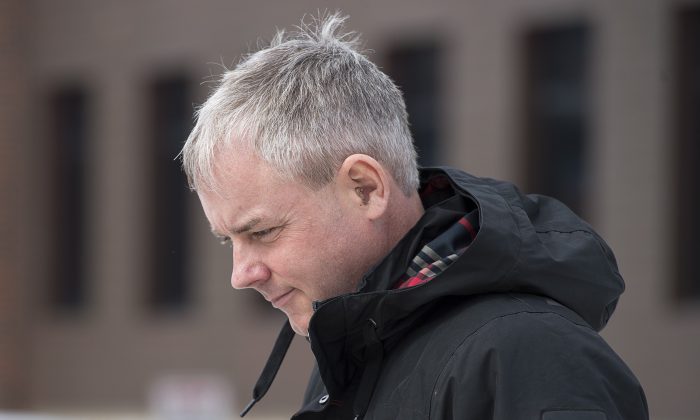 Dennis Oland heads from the Law Courts as he continue his testimony in Saint John, N.B., on March 7, 2019. (Andrew Vaughan/The Canadian Press)
Canada

SAINT JOHN, N.B.—Dennis Oland revisited the office where his father, Richard, was bludgeoned to death eight years ago as evidence wrapped up Tuesday at his second-degree murder trial.

Sheriffs guarded the entrance to the crime scene in uptown Saint John, allowing only the main participants in the dramatic trial into the small, second floor office where 69-year-old Richard Oland was killed on July 6, 2011.

News reporters, camera crews and a few curious onlookers lined up on the narrow, one-way street across from the office as Dennis Oland, accompanied by defence lawyer James McConnell, quickly entered through a street-level door.

Crown prosecutors and the judge in the case, Justice Terrence Morrison, also entered.

No members of the public or news media were allowed to take part in the visit, which was purely a visual inspection of the scene as requested by the defence.

The retrial is now adjourned until May 9, when the Crown and defence will give closing arguments.

There won’t be a verdict in the trial, which is before judge alone, until mid-June or later.

Lead defence lawyer Alan Gold told Morrison the defence wanted him to get a first-hand look at the cramped office so he could appreciate their argument that Richard Oland’s killer was a “perfect target” for blood spatter during the violent attack.

The businessman and former executive of the family-owned business, Moosehead Breweries Ltd., was struck more than 40 times, mostly on the head, with an axe-like weapon that was never found. Blood spatter, brain matter and bone fragments radiated in a circle around the body, but only a few small specks of blood were connected to Dennis Oland.

The jacket Dennis was wearing when he visited his father on July 6, 2011, was found to have four tiny bloodstains on it and Richard Oland’s DNA. He is the last known person to have seen his father alive.

Tuesday was day 44 of Oland’s retrial for murder. His 2015 conviction was overturned on appeal and the new trial ordered.

The defence took only five days. The star witness for the defence was Dennis Oland himself, who took the stand and swore he was “not that kind of monster” who would hurt his dad, or anyone.

The final witness on Tuesday was Jack Connell, Dennis Oland’s maternal uncle. He told the court about a family logbook Oland retrieved from his father’s office on July 6, 2011.

The defence said it is telling the book had no blood on it, but prosecution lawyers contend Oland removed it from the office before he returned for a third visit when they say he killed his father.

Oland, 51, has pleaded not guilty to the crime. He was supported throughout the trial by members of the Oland family, including Connell and his paternal uncle, Derek Oland, executive chairman of Moosehead.

I asked Dennis Oland what he thought of his testimony: pic.twitter.com/KvScXvELGL

The family has maintained that Dennis Oland was wrongly accused of the killing.