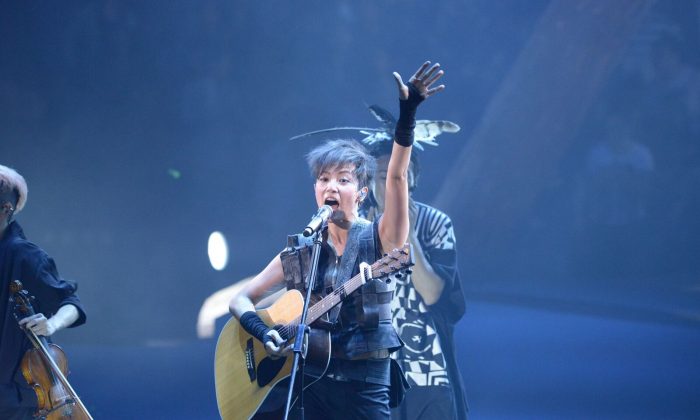 Hong Kong pop singer Denise Ho Wan-see, also called HOCC, held concerts at the Hong Kong Coliseum this month for the first time since 2014, the year she stood up to support the democratic Umbrella Movement.

The concerts were called “Dear Friend, HOCC 2016 Hong Kong Concerts” and were held for four consecutive days in October.

Ho was one of the very few popular Hong Kong celebrities to stand up for the Umbrella Movement. As a result of her support for the movement, she lost 90 percent of her income, and all her performances planned in mainland China were cancelled.

In June this year, due to mainland media pressure, cosmetics giant Lancôme cancelled a concert in which Ho was supposed to take part. This caused a stir in Hong Kong and internationally.

Other brands she was advertising for have also cancelled her involvement.

The Hong Kong Coliseum has a seating capacity of 12,500. It is not easy to gain approval to hold a concert there. To get approval, singers or artists must be very popular and must have been excellent performers during their careers.

It is also necessary to find a powerful sponsor.

Ho could not find one powerful sponsor willing to support the shows, so she came up with a crowdfunding alternative she called “Togetherly Exclusive.” She invited individuals and small and medium enterprises to pledge sponsorship for the event.

After Ho posted her plan on Facebook to recruit “Togetherly Exclusive” sponsors, 100 sponsorship units were snapped up in only one day. Each unit was worth HK$15,000. Sponsoring events might no longer be “Exclusive” to big enterprises.

A short quote from the program manual reads (loosely translated): “Actually, it’s not important whether we hold the concerts at the Hong Kong Coliseum or not; it’s not important how gorgeous the clothing is; even more, it’s not important about our music. The most important thing is, we do this experiment with a musical concert, with ‘Togetherly Exclusive’ sponsors together. For those who support and are supported, we stand on the same side, and we say hi to each other. … Dear friends, thank you for having guts.”

All tickets offered for the Oct 8 and Oct 9 shows sold out in 3 hours. That evening, Ho announced she would add two more shows, on Oct 7 and Oct 10. The additional tickets sold out in one day.

A total of 50,000 tickets and 4 shows were all fully supported. Attendees were mainly from Hong Kong, Taiwan, and mainland China, but not all of them were her fans. Many people supported her because she stood up for Hong Kong.

A lot of people raised their hands each time Ho asked, “Who is at my concert for the first time?”

On the final night of the HOCC 2016 Hong Kong concerts, a large number of Ho’s fans organized an activity. They decided to surprise Ho during the encore sessions with an adapted song, saying (loosely translated): “There is a kind of person, a person with guts, who has numerous possibilities, don’t care if it is entertainment or an obligation, being yourself in your own way, it’s much more attractive on the lonely path.”