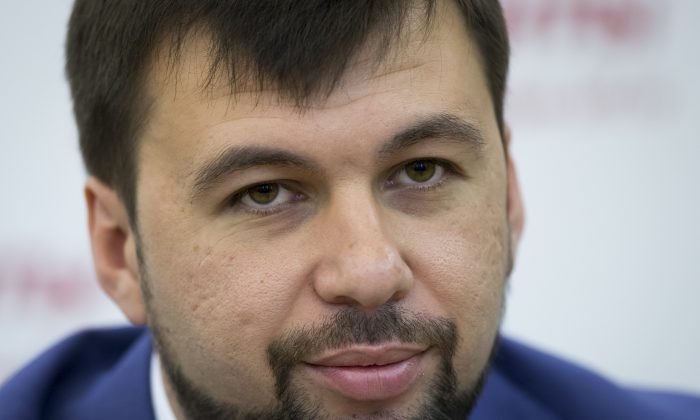 Denis Pushilin, leader of the insurgent Donetsk People’s Republic attends a news conference in Moscow, Russia, Thursday, June 19, 2014. Leader of the self-proclaimed Donetsk People's Republic Denis Pushilin admits the pro-Russian fighters are significantly weaker than the Ukrainian army. Pro-Russia separatists shot down a Ukrainian military transport plane Saturday, killing all 49 crew and troops aboard in a bloody escalation of the conflict in the country's restive east. (AP Photo/Alexander Zemlianichenko)
Europe

Denis Pushilin, a rebel leader in the restive Donetsk region in Ukraine, resigned from his post on Friday night.

“Dennis is now in Moscow. He sent a letter addressed to me with a request for resignation from his post at his own request. In the council session, the question was put to the vote. MPs supported Pushilin’s resign,” vice-speaker Vladimir Makovich told Interfax Russia.

Pushilin was described as “chairman” of the Donetsk “Supreme Council.” He’s also been described as the leader of the insurgent, self-proclaimed Donetsk People’s Republic.

The reasons for his departure are unclear.

The departure comes just after he said that his group is willing to let the international community in to look at the wreckage of Malaysia Airlines Flight MH17, which crashed in the area on Thursday.

“We are ready to let the international commission into our territory to look into the tragedy more thoroughly and properly,” he said, according to the Washington Post.”This is in our interests, as we do not feel guilty.”

What we know and don’t know:

BRUSSELS (AP) — One day after the crash of a Malaysian jetliner carrying 298 people in eastern Ukraine, here’s what is known, and what has been claimed:

U.S. officials and an adviser to Ukraine’s interior minister have said a surface-to-air missile brought down Malaysia Airlines Flight 17 as it flew Thursday from Amsterdam to Kuala Lumpur. All 298 people aboard died. U.S. Ambassador Samantha Power told the U.N. Security Council in New York on Friday the missile was likely fired from a rebel-held area near the Russian border. Independent aviation experts have agreed a missile was the likely cause, but so far, there’s been no proof. Ukraine’s government, the pro-Russia rebels who oppose it and Russia have all denied shooting down the passenger plane. The official investigation into the crash and its cause has only begun.

The whereabouts of the plane’s flight data recorder and cockpit voice recorder remained unknown Friday. The rebels gave conflicting reports about whether they had found them. Russia’s foreign minister said his country had no intention of acquiring them and that they should be given to international aviation organizations. Experts in air accident investigations said the boxes’ contents could be key to establishing what happened to the Boeing 777 in the moments before it crashed. The thud of a missile hit or the acoustic shock wave emitted by an explosion could have been picked up by the cockpit recorder, they said.

According to international civil aviation regulations, Ukraine should take the lead in investigating an air crash on its territory. Ukraine has called for an international probe, and the United States has offered to assist. But access to the site in rebel-held lands 40 kilometers (25 miles) from the Russian border remained difficult and dangerous Friday. It was still uncertain whether the rebels would allow Ukrainian government officials to pass through their checkpoints. A spokeswoman for Ukraine’s emergency services accused rebel militiamen of interfering with recovery operations.

By midday, 181 bodies had been recovered, according to emergency workers. A Ukraine Foreign Ministry official said remains of the dead would be taken to government-controlled Kharkiv for identification. Andrei Purgin, a leader of the pro-Russian separatists, said the bodies will be taken to the Black Sea city of Mariupol, also controlled by the government. Malaysia Airlines and relevant governments said the passengers included 192 Dutch, 29 Malaysians, 28 Australians, 12 Indonesians, 10 Britons, four Germans, four Belgians, three Vietnamese, three Filipinos and one person each from the U.S., Canada, New Zealand and Hong Kong. These likely include some with dual nationalities. Some passengers were researchers and activists heading to an AIDS conference in Australia, news that sparked an outpouring of grief across the scientific community. Among them were the well-known Dutch researcher and former president of the International AIDS Society, Joep Lange, and World Health Organization spokesman Glenn Thomas, based in Geneva. Malaysia Airlines regional vice president Huib Gorter told reporters at Amsterdam’s Schiphol Airport the carrier was making an initial payment of $5,000 to families of all victims to cover their immediate costs.

The Associated Press contributed to this articlle.