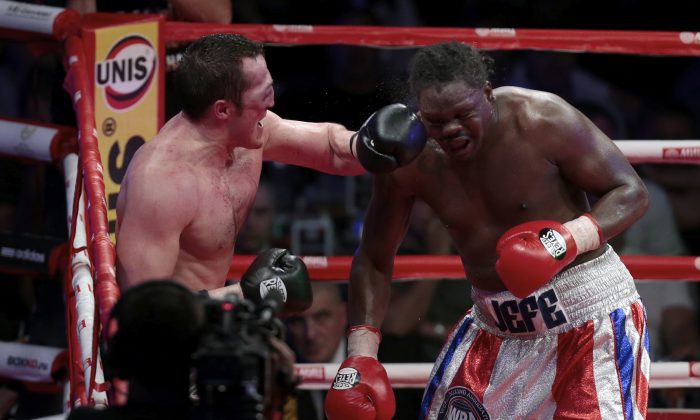 Denis Lebedev, of Russia, left, and Guillermo Jones, of Panama, fight during their WBA cruiserweght world championship title bout, in Moscow, Russia, on Friday, May 17, 2013. Jones knocked out Lebedev in the 11th round. (AP Photo/Ivan Sekretarev)
Sports

Denis Lebedev vs Guillermo Jones: Russian Boxer Comes to US to Train for Rematch

Denis Lebedev, a Russian boxer, has come to the United States to train for a rematch with U.S. boxer Guillermo Jones, a Russian news agency said.

Lebedev is in Los Angeles for a two-month training camp after losing to Jones in Moscow in May 2013.

But that loss was reversed when Jones failed a drug test. The WBA cruiserweight belt was given back to Lebedev, on the condition that a re-math would happen.

Lebedev’s promoter Vlad Hrunov told R-Sport in December that Don King, the promoter for Jones, was using delaying tactics. He said he was considering petitioning the WBA to be able to fight WBC champion Krysztok Wlodarczyk instead.

However, progress since then has been made.

King and Wlodarcyzk will hold a purse bid on January 27th at 11 a.m. at the World Boxing Association’s office in Panama.

A date for the rematch hasn’t been set yet.