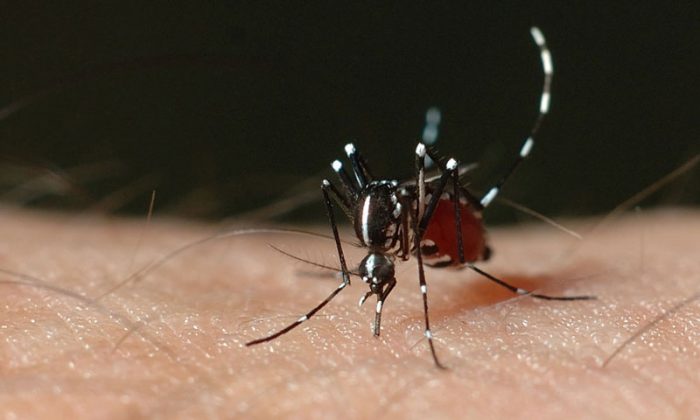 The tropical disease dengue fever has been spreading rapidly in southern China’s Guangzhou, the capital of Guangdong Province. As of Aug. 13, 400 cases had been reported.

Dengue is a mosquito-borne virus that may cause flu symptoms. In a small proportion of cases it can cause a life-threatening internal hemorrhaging or drop in blood pressure.

The key to controlling dengue fever is mosquito eradication.

Mr. Tao, resident of Guangzhou’s Yuexiu District told Epoch Times that locals have been told to kill mosquitoes, “The mosquitoes in our neighborhood are swarming. I used to brush them off but now I think it’s getting more serious.”

Ms. Wang from Daguang Town, Nansha District works in a hospital. She told Epoch Times, “Dengue fever has symptoms similar to the flu and therefore it’s hard to identify. Right now everyone is trying to wipe out the mosquitoes.”

Dr. Chen at Guangdong Provincial People’s Hospital told Epoch Times, “A lot of new cases are reported daily at our hospital. Many patients are being admitted to the infectious disease hospitals.”

In the last 10 days, the area of infection has increased from 33 streets to 52 streets. The Guangdong Province Health Department cites as causes for the outbreak heat and humidity and travelers who carry and spread the virus.

The city has been hit with dengue outbreak annually in the past few years, usually between May and November and peaking in September or October. Zhou Duanhua, head of the Guangzhou Health Department Disease Control Division, predicts the epidemic will be more difficult to control this year, but anticipates the disease will peak in the near future.

According to the US Center for Disease Control, dengue is a viral disease spread by Aedes mosquitoes. Symptoms include fever, headache, joint and muscle pain, rash, and bleeding. In severe cases, it can cause hemorrahgic fever that may lead to circulatory shock and death. Currently there is no vaccine and treatment is mostly supportive, such as rest and hydration.

*Image of “Aedes aegypti” via Shutterstock