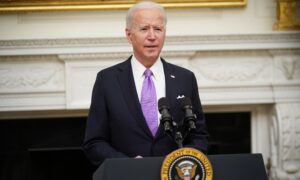 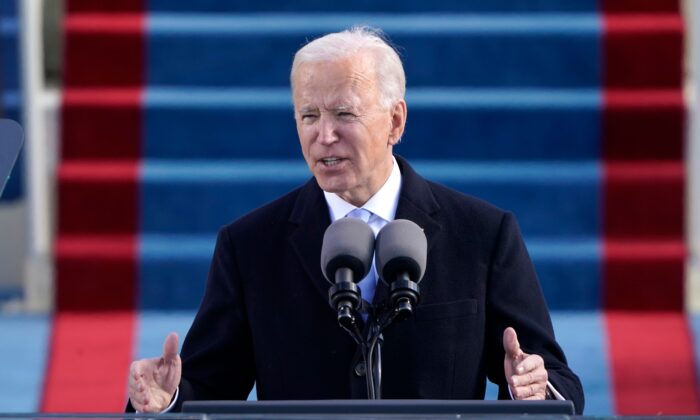 President Joe Biden delivers his Inauguration speech after being sworn in as the 46th President at the U.S. Capitol, on Jan. 20, 2021. (Patrick Semansky/AFP via Getty Images)
Executive Branch

“It has taken just one day for President Joe Biden to deliver his first major victory for American workers. As General Counsel of the National Labor Relations Board, Peter Robb has consistently neglected his statutory duty to uphold workers’ right to stand together and negotiate for better working conditions,” Scott, a Virginia Democrat, said.

“His refusal to uphold the Board’s mission during this deadly pandemic—including unlawfully halting union representation elections and failing to hold employers accountable for violating the law—has left workers powerless to protect themselves against unsafe workplaces, meager wages, and other forms of abuse.”

AFL-CIO President Richard Trumka described Robb as “a union-busting lawyer by trade” who, as the NLRB’s chief lawyer, “mounted an unrelenting attack for more than three years on workers’ right to organize and engage in collective bargaining.”

“His actions sought to stymie the tens of millions of workers who say they would vote to join a union today and violated the stated purpose of the National Labor Relations Act—to encourage collective bargaining,” Trumka said in a statement.

Robb earned such intense opposition from labor leaders that the resignation request was delivered to him a mere 23 minutes after Biden was inaugurated, according to National Right to Work Foundation (NRTWF) President Mark Mix.

Mix told The Epoch Times on Jan. 22 that Biden has received millions of dollars in union campaign cash and in-kind contributions in the course of his 50-year career as a Washington politician, including tenure as a senator, vice president, and now president.

“A general counsel who was serving during the Truman administration who had time left in his term was asked to resign and complied, but never before has the general counsel for the NLRB been fired, so this is a first,” Mix said.

“The reason they had to get rid of Robb is because he has issued several complaints that give individual workers the right to act under the NLRB Act.”

The NRTWF head said prior to Robb’s appointment in 2017 by President Donald Trump, the NLRB “only recognized two parties, Big Business and Big Labor, and finally, a general counsel had the nerve and the courage to stand up and fight for employee rights.”

Mix was referring to NLRB cases defending individual employees’ rights such as not having to pay union dues as a condition of employment and their rights to demand elections to decide whether to decertify a union as their representative, among others.

“We’ve got several cases pending at the NLRB that are specifically about giving workers the right to exercise the privileges and powers they were granted under the National Labor Relations Act of 1935,” Mix said.

“Richard Trumka and the rest of the Big Labor leaders were desperate to get rid of this NLRB.”

“President Biden’s continuous calls for unity and civil discourse upon taking his oath of office are already proving to be empty aspirations,” Foxx told The Epoch Times on Jan. 22. “This outrageous ultimatum that General Counsel Robb step down from his four-year Senate appointment less than 10 months before the expiration of his term is unacceptable and flouts the National Labor Relations Act.”

Foxx said Biden should rescind Robb’s termination and allow him to finish the job he was appointed to do independently and free from political influence.”

Other Republicans on the education and labor committee echoed Foxx, with Rep. Greg Murphy (R-N.C.) telling The Epoch Times: “This is an unprecedented and divisive action that literally comes right off the lips of President Biden saying that he was calling for unity in the country. He literally spins off the teleprompter to cut out from underneath the labor board their general counsel.

“It’s always been precedent for every single president before Biden that they allowed every general counsel—regardless of their political affiliation or appointment—to finish out their term.”

Similarly, Rep. Ron Wright, a Texas Republican, told The Epoch Times that “firing Mr. Robb from his Senate-confirmed, four-year appointment speaks volumes to how unserious President Biden and his administration are about truly uniting our government and the nation.”

“The Biden administration seems to be wasting no time with their unprecedented move in favor of Big Labor, and the Congressman looks forward to having these debates in the Education and Labor Committee,” Wright said.

On the same day Biden fired Robb, he named NLRB member Lauren McFerran as the board’s new chairman, replacing John Ring, who was named to the post in 2018. Republicans still hold a 3–1 majority on the NLRB.