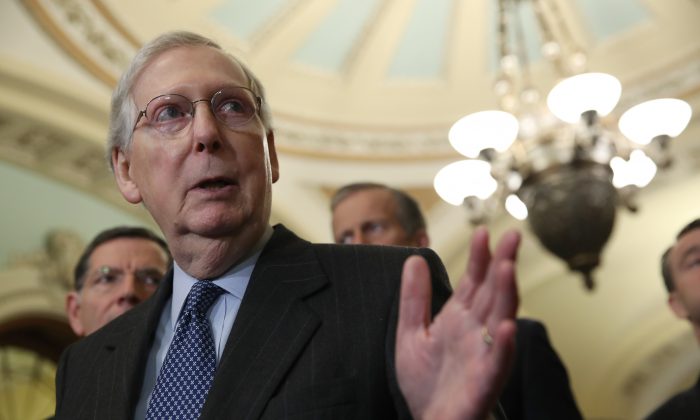 WASHINGTON—Senate Democrats have forced cloture votes 128 times on President Donald Trump nominees to the federal courts and executive branch positions, 10 times as many times as Republicans did during his predecessor’s first two years in the Oval Office.

By comparison, during the first half of President Barack Obama’s initial term, there were only a dozen cloture votes on the president’s nominees, according to data compiled by Senate Majority Leader Mitch McConnell (R-Ky.).

There were only 42 Senate Republicans during Obama’s first two years, compared to 45 Democrats, plus two independents who caucus with them, under Trump.

The comparison is even starker when Trump’s first two years are compared with those of presidents George W. Bush, Bill Clinton, George H.W. Bush, Ronald Reagan, and Jimmy Carter.

There were no such cloture votes on nominees by Carter, Reagan, or the first Bush, while Clinton faced a total of only eight and the second Bush a mere four.

McConnell and other Republican leaders have been vociferously blasting Democratic delaying tactics against Trump nominees in recent days.

“I offered the Democratic Leader [Sen. Charles Schumer (D-N.Y.)] a package of 150 non-judicial executive branch appointments that came out of committee supported by both Democrats and Republicans. … And he rejected it,” McConnell told a Feb. 13 Senate Rules Committee meeting

Sen. James Lankford (R-Okla.) introduced a proposal earlier this month, with McConnell’s blessing, to reduce sharply the time for debate on most nominees after cloture is invoked.

“In the past, every president was essentially able to select their staff and begin serving the American people right after inauguration, until President Trump,” Lankford said at the time.

“In the past two years, Democrats have slowed the confirmation of more than 100 nominees, which has created a new low standard for how all future presidents will be treated. … Post-cloture debate time should be used for debate, not meaningless delay on an empty Senate floor.”

Similarly, Senate Rules Committee Chairman Roy Blount (R-Mo.) said: “Senate Democrats have abused the rules to the point where the president can’t put his team in place and the Senate can’t do its work. The degree of obstruction we’ve seen during the first two years of the Trump Administration is totally unacceptable.”

But Republicans have previously used cloture votes on presidential nominees even more effectively than the Democrats.

During 2013 and 2014, for example, there were 168 cloture motions on presidential nominees, by far the most since President Jimmy Carter, according to Senate data examined by The Epoch Times.

Thus, cloture motions on Obama’s nominees in 2013 and 2014 represented 77 percent of the total, compared to 68 percent under Trump to date.

Cloture is a procedure to end debate on a nominee that until 2013 required 60 votes. Frustrated by Republican filibustering of Obama’s nominees, Senate Democrats invoked the so-called “nuclear option” to require only a simple majority instead of 60 votes.

But with narrow majorities in the seven years since, getting simple majorities to invoke cloture is not always easy, especially for Senate Republicans, as many as six of whom can’t be assumed to vote with their party’s leaders.

Once cloture is invoked, debate is limited to no more than 30 hours and a final vote on the nomination must then be scheduled. Confirmation requires only 51 votes.

The ability of Senate leaders to overcome cloture obstacles has varied greatly from one Congress to another in recent years. McConnell has won 90 percent of the 186 cloture vote total since Trump took office.

There were 51 Democrats and two independents who caucused with them, and 47 Republicans in the Senate during the 112th and the 113th Congress.

Obama’s first two years included a Senate with 56 Democrats and two independents who caucused with them, plus the 42 Republicans. There were 91 cloture votes, with 63 being won by the Reid-led Democrats, for a 70 percent rate.