Dems Impeachment Drive Hurtling Toward House Vote, but the Rules Change Big-Time in the Senate Trial 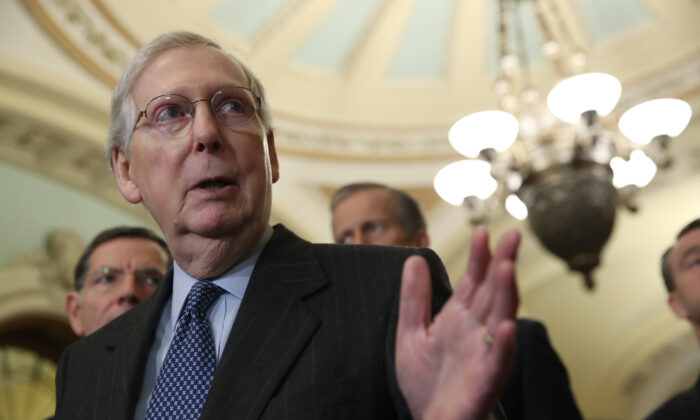 Members of the House of Representatives will vote as soon as next week on two articles of impeachment against President Donald Trump, but everything changes when the issue goes to the Senate.

One article charges Trump with “abuse of power” and the other with “obstruction of Congress” as “high crimes and misdemeanors.” If the House approves either or both of the articles, the issue goes to a trial in the Senate, where 67 votes will be required to convict Trump and remove him from office.

No previous president has been so removed; President Richard Nixon resigned rather than face the likelihood of becoming the first to be removed.

Pelosi, Schiff, and Nadler have called the shots in the lower chamber thus far, while Republicans have been relegated to guerrilla cross-examinations and press gaggles.

On the other side of the Capitol building, Senate Majority Leader Mitch McConnell (R-Ky.) and Senate Judiciary Committee Chairman Lindsey Graham (R-S.C.) would control a trial, leaving the Democrats scrambling to be heard.

First, it will be extraordinarily difficult for House Democratic impeachment managers to present their case because hearsay evidence won’t be admissible at trial, unless two-thirds of senators change the rules.

Much of the evidence marshaled by House Democrats is based on hearsay, perhaps most notably in the anonymous whistleblower’s complaint at the heart of the case for impeachment.

Second, senators must attend but they won’t be able to ask questions, except by submitting them to the presiding officer of the trial, the chief justice of the Supreme Court.

Third, Democrats will get little rest between the House vote and the trial, because Senate rules require the proceedings to begin no later than 1 p.m. the day after the impeachment article(s) are received in the upper chamber and continue six days a week until a final verdict is reached.

Finally, the trial would probably occur during the closing days of the Iowa presidential caucuses and the New Hampshire primary.

Democratic campaign strategists interviewed by The Epoch Times acknowledged some of the approaching challenges, but mostly professed confidence about their side’s prospects.

Conflict over admitting hearsay evidence is likely to be a major trial issue and has raised hackles among Democratic strategists.

“And some of that is hearsay and is valid under the rules of evidence, for example, because it’s based on contemporaneous notes. [Republicans] resort to misdirections like this instead of disputing the facts, because they can’t dispute the facts.”

Similarly, Baltimore-based Defiance Strategies LLC President Christian Hanley dismissed the hearsay evidence issue as “a smokescreen from the beginning. Reliable witnesses have offered first-hand testimony throughout this process, with GOP representatives screaming ‘hearsay’ to try to distract from the damning facts.”

Brian Darling, a former counsel to Sen. Rand Paul (R-Ky.) and founder of the Washington-based Liberty Government Affairs, said that “there are some exceptions to the rule, but Democrats will have a hard time proving anything without relying on hearsay.”

Darling added that “most of the witnesses in the House [intelligence committee] hearings presented hearsay and that will not be admissible, because Republicans, who control the Senate, will try to remove that evidence from the proceedings.”

Democrats will claim “obstruction of Congress by virtue of the Trump administration refusing to comply with congressional subpoenas,” Darling said, “but I don’t think the American people would support removal of the President on those grounds.”

A trial is likely to present a huge campaign problem for five senators seeking the Democratic Party’s 2020 presidential nomination, including Sens. Michael Bennett of Colorado, Cory Booker of New Jersey, Amy Klubochar of Minnesota, Bernie Sanders of Vermont, and Elizabeth Warren of Massachusetts.

The potential for damage to the senators’ campaigns was one of the few issues on which strategists on both sides of the aisle agreed.

Asked by The Epoch Times if, assuming the trial’s outcome is a near-certain Trump acquittal, the senators will seek a way to avoid the trial and keep campaigning in Iowa and New Hampshire, Hanley said, “Even if it were, it is the duty of all senators to attend, listen, and vote, regardless of whether they are running for president.”

Critchley agreed, saying: “It is likely to be a problem, because being on the ground in key states is critically important, as Hillary [Clinton] learned to her (and our) cost. But I don’t see how they could choose to skip an impeachment trial, both as a matter of constitutional duty and as a matter of politics.”

Tom Schatz, president of conservative-leaning Citizens Against Government Waste, called House Democrats’ timing “clearly in the category of ‘be careful what you wish for,’ because the trial will have a severe negative impact on [the senator’s] campaigns, both due to the time they cannot spend campaigning, and the mere fact that the Senate is even having the impeachment trial itself.”

Kevin Sheridan, founder of the Washington-based Sheridan Media Group and a senior adviser to 2012 Republican presidential nominee Mitt Romney, said: “You have to ask yourself what on earth Democrats were thinking. A long trial freezes the campaign for every senator who has to sit quietly in Washington for six days a week.”

Tellingly, the Democratic strategists didn’t agree on who will benefit most from the senators’ absence.

“I think Joe Biden will benefit, because elections are largely about contrasts, and the contrast between Biden and Trump will become as clear as it gets—a good guy versus a bad guy,” Critchley said.

“With other candidates off of the campaign trail for the Senate trial, Mayor Pete will be able to really focus on localized issues in Iowa and New Hampshire that I believe can pull him over the finish line in these early states and change the trajectory of this overall race,” Friend said.

Even so, said Hanley, “Mayor Pete will face a daunting challenge in upsetting Biden heading into South Carolina, whose demographics are more representative of the Democratic electorate.”