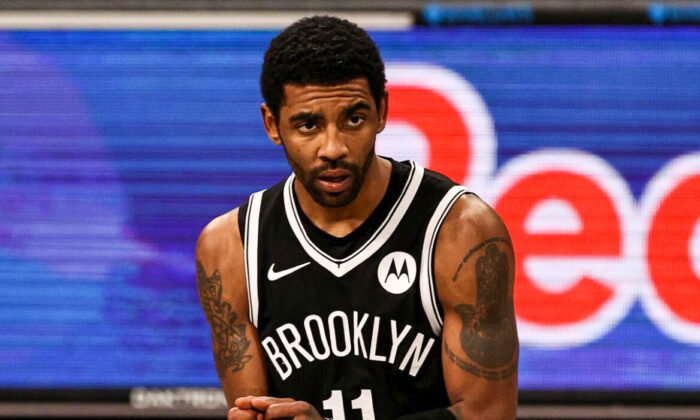 Kyrie Irving #11 of the Brooklyn Nets reacts in the second half against the Miami Heat at Barclays Center in New York City on Jan. 23, 2021. (Elsa/Getty Images)
Vaccines & Safety

New York City’s Barclays Center was swarmed on Sunday by demonstrators supporting Brooklyn Nets guard Kyrie Irving‘s decision not to get vaccinated against COVID-19, shortly before the team’s home opener.

Chanting “Let Kyrie play!” and “Stand With Kyrie,” crowds gathered at the center in protest of the NBA team’s decision to ban Irving from playing until he is fully vaccinated against COVID-19, the disease caused by the CCP (Chinese Communist Party) virus.

A small group even broke through barriers and got all the way to the front entrance of the building, forcing arena officials to briefly close the doors while fans were trying to get in.

Kyrie Irving supporters protested and tried rushing the Barclays in support of Kyrie refusal to get vaccinated thus far. pic.twitter.com/UJdAo9V05m

The Brooklyn Nets confirmed in a statement earlier this month that Irving would not be allowed to play with the team until he receives a COVID-19 vaccination. A New York mandate (pdf) requires professional athletes playing for a team in the city to be vaccinated in order to play or practice in public venues, even if the athletes themselves are not residents of New York City.

“Kyrie has made a personal choice, and we respect his individual right to choose,” Nets General Manager Sean Marks said in a statement at the time.

The Nets superstar during an Instagram Live post on Oct. 13 asked the public to respect his decision in choosing not to get vaccinated, adding that he is aware of the consequences of refusing to do so.

“The financial consequences, I know I do not want to even do that,” Irving said. “But it is reality that in order to be in New York City, in order to be on a team, I have to be vaccinated. I chose to be unvaccinated, and that was my choice, and I would ask you all to just respect that choice.”

Irving added that he is “going to just continue to stay in shape” and “be ready to play” again with his teammates.

“This is not a political thing. This is not about the NBA, not about any organization. This is about my life and what I am choosing to do,” he added.

Protester Curtis Orwell said on Sunday that he and others were at the Barclays Center to protest “bodily autonomy and sovereignty,” and the right to choose what goes in their bodies.

“We also know so much more than we knew 18 months ago about the virus,” he said. “We have therapeutics that have been tried and proven to great success. Unfortunately, those kinds of voices are being totally suppressed and censored.”

A spokeswoman for the arena said that the center briefly closed its doors “in order to clear protestors from the main doors on the plaza and ensure guests could safely enter the arena.”

“Only ticketed guests were able to enter the building and the game proceeded according to schedule,” she added.