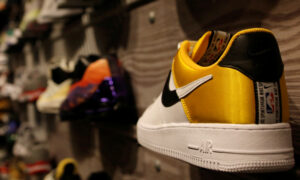 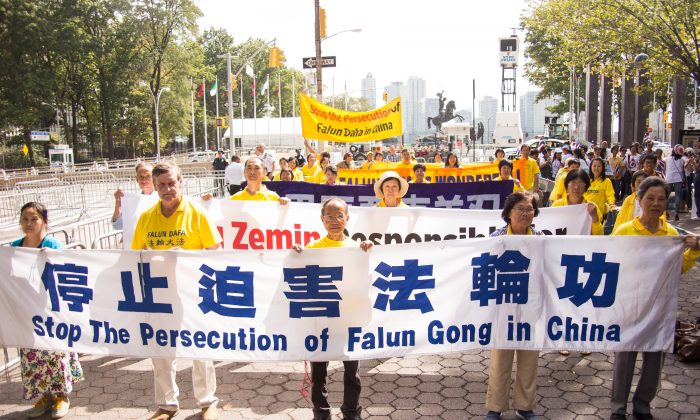 NEW YORK—Standing in the light rain in front of tight security outside U.N. headquarters, Zhang Shufen, who used to be a company service representative in Beijing, became tearful as she recalled her two-year imprisonment in Beijing Women’s Prison.

It began in 2008, she said, after she was arrested by police due to her belief in Falun Gong; the persecution of this meditation practice led to her forced exile. In custody, she was denied toilet use for a week at a time, which caused her feces to become “as hard as stones” and resulted in bleeding. Because she was not given paper or running water, she was forced to wash herself with toilet water.

Along with over a dozen colleagues, she has come to greet Chinese Premier Li Keqiang, attending his first U.N. meeting, with her message.

“I want to inform everyone about the evil nature of the Chinese Communist Party,” Zhang said.

David Tompkins, a demonstration organizer, said that the protest was meant to help “stop the persecution of Falun Gong in China,” now in its 17th year.

The yellow-clad practitioners held banners demanding the prosecution of retired regime leader Jiang Zemin, the man who cast Falun Gong as an enemy of the Communist Party and used this as a pretext for a campaign involving nationwide hate propaganda, forced labor, torture, and an industry of forced organ harvesting.

Falun Gong, also known as Falun Dafa, is an ancient Chinese discipline with moral teachings and meditative exercises. The practice slowly gained popularity in the late 1990s in China; in 1999, public security authorities estimated that 70 million people had taken it up.

According to Tompkins, the group’s calls for justice carry renewed urgency because of new investigative findings by David Kilgour, former Canadian member of Parliament, David Matas, renowned human rights lawyer, and Ethan Gutmann, an American journalist. Their latest report put the number of Falun Gong practitioners being killed for their organs at 60,000 to 100,000 annually, according to Tompkins.

“The numbers are just much higher than what we have thought in the past,” said Tompkins.

Falun Gong practitioners are not the only victims inside China who are targets of state-sanctioned killing for organs. Tibetans, Uyghurs, and house Christians have also been targeted by the Chinese regime, researchers believe.

Tompkins hoped that more New Yorkers would come to realize a startling truth: “If you need a transplant, and you are going to China, somebody is going to be murdered in order to provide those organs.”

“And it is not the executed prisoners that the Chinese authorities say,” he added.

Wang Xiuxia, a middle-aged woman from the northeastern Chinese city of Shenyang, has been in New York for just two months after escaping a life of harassment and destitution caused by the Party’s campaign.

A taxi driver who learned Falun Gong in 1997, Wang’s struggle to evade the authorities forced her into homelessness from 2002 to 2009. Prior to this, she had been locked in a reformatory for three months. Her older sister Wang Xiuyuan was not as fortunate. Held in the same facility for two years, she was severely beaten and tortured, and died shortly after her release in 2004.

The stories of Wang and many others have been compiled and published by Minghui.org, a website run by Falun Gong practitioners, but the full extent of the repression remains difficult to determine given the closed nature of the Chinese regime.

Premier Li Keqiang is the second-highest-ranking member of the Communist Party’s seven-man Politburo Standing Committee, which effectively rules China. He has had the position since late 2012, when Xi Jinping became regime leader.

Li gave a speech to the U.N. on Sept. 21, and is scheduled to pay visits to Canada and Cuba after leaving New York.

For all the suffering the persecution has caused, former leader Jiang Zemin’s bid to snuff out Falun Gong has not been successful and by some indications is meeting increased resistance outside, and even inside, the Chinese regime. Starting in 2014, hundreds of thousands of Chinese Falun Gong practitioners and their supporters have submitted criminal complaints against Jiang to the Chinese national judiciary, and many have been quietly accepted.

Yu Zhengjie, Falun Gong adherent and former accountant working at a procuratorate in northern China’s Heilongjiang Province, had a very simple request for Premier Li regarding her brother, Yu Zhonghai:

“Please carry out justice and release my younger brother, who has been in prison for 15 years.”