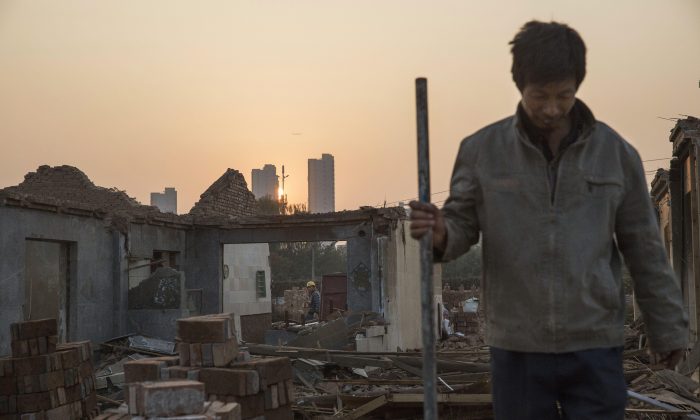 Chinese laborers demolish a home in Gucheng Village, in the Tongzhou District of Beijing, on Oct. 16, 2015. Beijing municipal offices will be moved from the center of the city to outlying areas as part of an ambitious government project to create an urban megacity in northern China. (Kevin Frayer/Getty Images)
China

Dr. Liu Chunguang, director of radiology at a hospital in Zhengzhou, China was conducting an x-ray when suddenly a construction crane came smashing through the office wall.

“The patient was scared half to death and ran away, and refused to proceed with the examination no matter what,” Liu told Xinhua, China’s official state media.

On Jan. 7, about a dozen unidentified men wearing camouflage arrived at the Fourth Affiliated Hospital of Zhengzhou University and started demolishing it without notice. They tore down the radiology department and the morgue, while both were still operating. Six bodies were buried under debris as the morgue was reduced to rubble.

“We wanted to rush in and save the equipment, but they wouldn’t let us in,” Yuan Fang, a staff member in the PR department of the hospital, told The Paper, a Shanghai-based online news outlet.

Three staff members incurred light injuries, and equipment worth over $900,000, including a $607,000 digital gastrointestinal machine, were destroyed by bulldozers.

We never expected that they would come to demolish today.
— Chen Lei, director of logistics department of the Fourth Affiliated Hospital of Zhengzhou University

This was the second time demolition crews arrived at the hospital. According to staff, on Jan. 2, the No.1 residential building was likewise demolished.

The hospital is part of a large provincial hospital complex in Henan Province in central China. The complex occupies about 16.5 acres of state-owned land and is located on Jiangshan road, which is part of a local expansion project.

“The hospital has already diverted nearly 5 acres of land to accommodate city construction needs,” hospital authorities told Caixin, a Beijing-based media group. “No reasons were given by authorities for taking the land, and $220,000 in compensation for items on the land has yet to be paid.”

Xiong Zhiliang, deputy director of land requisition in Huizhou district, told The Paper that road repair is a public interest project, and he is not aware of the hospital demolition because he is away on a business trip.

Demolition on Number Four Hospital in Zhengzhou, China commenced with Drs & patients inside, having to run for cover https://t.co/nOCLXdj8UJ

Local authorities issued the demolition order in January 2015. Since the hospital did not apply for administrative review or appeal the decision in court, “the decision of land requisition has come into effect,” said Xiong.

In China, there is an intricate legal process before actual land requisition can take place. Even when the demolition is eventually done by force, it requires a court order, which hadn’t happened in this case.

Chen Lei, director of the hospital’s logistics department, confirmed that the hospital did receive notice of land requisition. “Both parties have been negotiating over whether the radiology department should be demolished,” said Chen. On Dec. 29, the local government agency decided that the demolition would be carried out, but didn’t specify a date.

“Compensation should be made at once for the demolition and relocation of equipment. We have so many machines in the hospital that need to be relocated. You know, x-ray protection measures are complicated and expensive. … We never expected that they would come to demolish today,” Chen told The Paper.

The press office of Huiji District published a statement on its Weibo account (China’s version of Twitter, which is banned), responding that personnel had checked and confirmed that no one was in the building, and stated that any behavior violating the law or regulations would be handled seriously.

News of demolition triggered strong reaction on the Internet. One joke circulating suggested that the local government offices should be demolished instead since they “get in the way of the development of traffic and local business.”

Frank Fang contributed to the report.