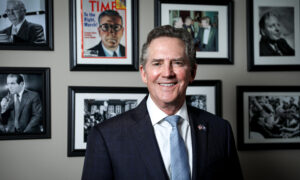 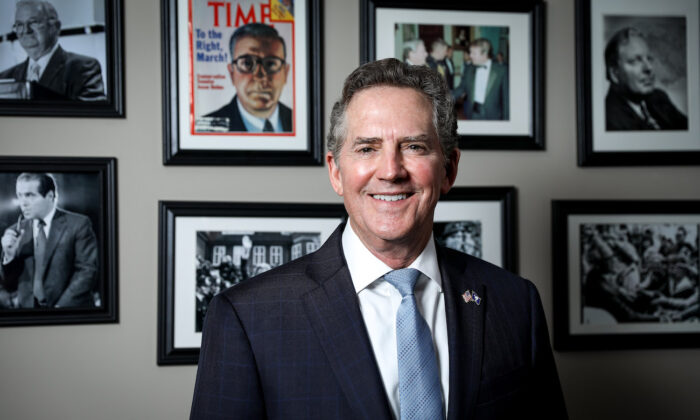 Democrats would “do the same thing” to fill a vacancy in the Supreme Court if they were in the same position as Senate Republicans, who currently hold the majority in the upper chamber of Congress, said former congressman and author Jim DeMint.

DeMint was speaking just hours ahead of a Senate vote to confirm Judge Amy Coney Barrett to the nation’s high court.

“We know if Democrats were in the same position, they would do the same thing,” DeMint told The Epoch Times of the move to fill in a Supreme Court vacancy before the election.

“There’s nothing unprecedented about this. Perhaps in recent times it hasn’t happened. But we know if the Democrats control the Senate at this point, [Barrett] would not be considered,” he asserted. “And just as if the Democrats had been in control when [President Barack] Obama made his last nomination, they would have confirmed [him].”

DeMint previously served for 14 years in Congress, first in the House and then in the Senate, before resigning in 2013. He is the chairman of the Conservative Partnership Institute and author of multiple books including “Saving America from Socialism: How to Stop Progressive Attacks on Freedom” and “They’re Lying to You.”

Barrett was sworn in to be an associate justice of the Supreme Court by Justice Clarence Thomas in a ceremony attended by President Donald Trump late Monday, just eight days prior to the 2020 U.S. presidential election. She joins Justices Neil Gorsuch and Brett Kavanaugh as a Trump-nominated Supreme Court justice.

“She’s such a well qualified candidate,” DeMint said of Barrett when asked about the significance of her confirmation to the bench. “Obviously, we need a ninth member of the Supreme Court,” he said, adding that there are multiple issues besides elections that may require the Supreme Court to weigh in.

“I think she’ll be the first woman on the court with young children in the home,” DeMint said. “There are a lot of things, I think, that advance the cause of women in America, as well as just good jurisprudence in the sense that she believes in the Constitution, the text of it.

“She’s been very clear: she doesn’t want to be a justice that, in effect, changes the law in order to rule on it, which we’ve seen from some of the justices in the last years.”

He added, “I think Trump will definitely make an impression on the court with three great judges.”

“[Barrett] says her mentor is [Antonin] Scalia, and so if we want to get a sense of how she would rule, we could look at Justice Scalia’s past,” he suggested.

DeMint predicted that more political issues may be moved to the Supreme Court in the future because of what he calls the growing inability of Congress to resolve matters, “because of the polarization that we have between the Republicans and the Democrats.”

“That’s not a good thing in the sense that we can’t decide legislatively, we have to give it to nine people on the Supreme Court. That’s not the way it’s supposed to work,” he said. “And I think if you have more people like Justice Barrett, she is unlikely to decide on something that’s not determined legislatively. And I think you have a few more—probably like Gorsuch and maybe even Kavanaugh—feel the same way. So I don’t know exactly what this will mean. But the Supreme Court will always mean a lot to Americans.”

DeMint said that Democrats during the hearings “did a lot to try to instill fear.”

“Fear that you might lose your health care or in some ways your your Medicare, fear that a new court might criminalize same-sex marriage, they brought all these folks in to talk about fear of what she might do,” he elaborated. “So their point of making speeches on the Senate floor is to impact the election and to again incite fear that if we reelect Trump, he could put other justices on the court that could be threatening in their mind.

“But anyone who watched the hearings and watch Judge Barrett in her answers, is not going to be afraid of what she’s doing. They may disagree with the decision, but she is certainly a person that has the interest of every American at heart.”

Democrats wanted Republicans in the Senate to hold off on voting for a nominee until after the presidential election, pointing to what happened in 2016, when Merrick Garland was nominated by then-President Barack Obama to succeed Antonin Scalia, but Republicans didn’t let the nomination through.

Senate Majority Leader Mitch McConnell (R-Ky.) said on Sept. 18 in a statement following the death of Justice Ruth Bader Ginsburg: “Since the 1880s, no Senate has confirmed an opposite-party president’s Supreme Court nominee in a presidential election year.

“By contrast, Americans reelected our majority in 2016 and expanded it in 2018 because we pledged to work with President Trump and support his agenda, particularly his outstanding appointments to the federal judiciary. Once again, we will keep our promise.”

Democratic presidential candidate Joe Biden said in 1992 that in the situation where there is a “divided government,” where different parties occupy the White House and the Senate, “once the political season is under way … action on a Supreme Court nomination must be put off until after the election campaign is over.”

Biden led the Senate Judiciary Committee as chairman at the time, and there was no vacancy in the Supreme Court when he made the remarks.

He appeared to backtrack on his comments in March 2016, saying that the concept of the Biden rule is “ridiculous.”

“There’s only one rule I ever followed on the Judiciary Committee, that was the Constitution’s clear rule of advice and consent,” Biden said.

On Sept. 20, Biden criticized McConnell for his Sept. 19 comments, saying: “McConnell made up a rule based on the fiction that I somehow believe there should be no nomination to the court in an election year. That’s ridiculous.”