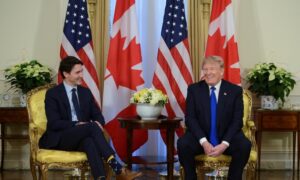 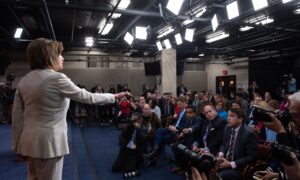 Pelosi Responds When Reporter Asks: 'Do You Hate the President?'
0 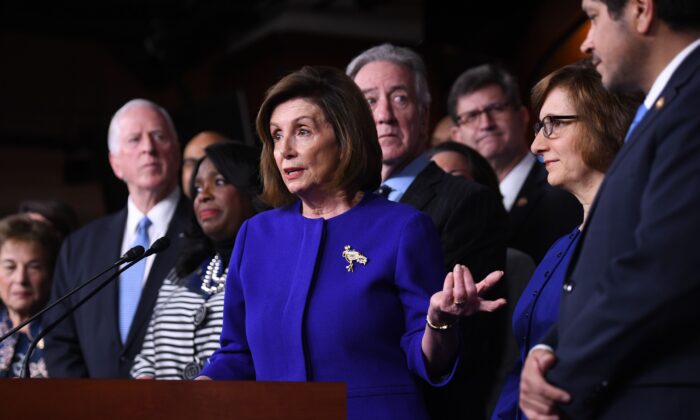 House Speaker Nancy Pelosi (D-Calif.) and House Ways and Means Committee Chairman Richard Neal, behind her, speak about the US - Mexico - Canada Agreement, known as the USMCA, on Capitol Hill in Washington, on Dec. 10, 2019. (Saul Loeb/AFP via Getty Images)
US News

The Trump administration and House Democrats reached an agreement on the United States-Mexico-Canada trade deal, Democrats said on Dec. 10.

“This is a hemispheric trade agreement,” House Ways and Means Committee chairman Rep. Richard Neal (D-Mass.) said at a press conference about the USMCA.

“This is a day we’ve all been working to and working for, on the path to ‘yes,'” House Speaker Nancy Pelosi (D-Calif.) said.

“We were in range for a while,” she added, but Democrats were working on strengthening enforcement on worker protections, environmental matters, and other issues.

Neal and Pelosi were holding a press briefing on the deal, known as USMCA, around 10 a.m. on Tuesday—about an hour after House Democrats announced two articles of impeachment against President Donald Trump.

Robert Lighthizer, the U.S. trade representative, was in Mexico to sign the revised USMCA with Mexican and Canadian officials.

Pelosi said she wasn’t worried about giving Trump a “victory.”

“We came a long way from what he originally proposed. And there’s some people who said ‘why make it look like he has a victory.’ We’re declaring a victory for the American worker,” she said.

USMCA will replace the North American Free Trade Agreement (NAFTA), which helped devastate manufacturing across wide swaths of the United States due to encouraging companies to move factories outside the United States.

Pelosi, who supported the original NAFTA in 1994, had given mixed messages on the deal, telling reporters on Nov. 14 that an agreement was “imminent” but later saying it probably wouldn’t be passed by the end of the year. She said that stronger worker protections needed to be negotiated, among other matters.

The announcement came one day after Richard Trumka, president of The American Federation of Labor and Congress of Industrial Organization (AFL-CIO), said that a deal was reached between Democrats and the White House and his union was reviewing it. The AFL-CIO is strongly linked to leading Democrats.

“He really got us to a place that was far from where we started with the proposal that was given to us,” she said, adding: “There is no question that this trade agreement is better than NAFTA.”

Neal said the negotiations with the administration were “tough.”

“It was based upon goodwill but also a determination that we address the problems in the past with enforceability,” he said.

America’s great USMCA Trade Bill is looking good. It will be the best and most important trade deal ever made by the USA. Good for everybody – Farmers, Manufacturers, Energy, Unions – tremendous support. Importantly, we will finally end our Country’s worst Trade Deal, NAFTA!

Trump said on Twitter Tuesday morning that the USMCA was “looking good.”

“It will be the best and most important trade deal ever made by the USA. Good for everybody—Farmers, Manufacturers, Energy, Unions—tremendous support. Importantly, we will finally end our Country’s worst Trade Deal, NAFTA!” he said.

In another missive, he wrote, “Looking like very good Democrat support for USMCA. That would be great for our Country!”

House Ways and Means Ranking Member Kevin Brady (R-Texas) said at a press conference Tuesday that the agreement “was a major win for America.”

“President Trump and Ambassador Lighthizer have fought hard and delivered on their promise for a pro-growth and modern trade pact with our North American neighbors after much delay by Democrats,” he said, urging Pelosi to bring to deal to a vote soon.