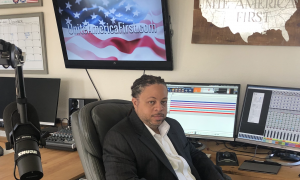 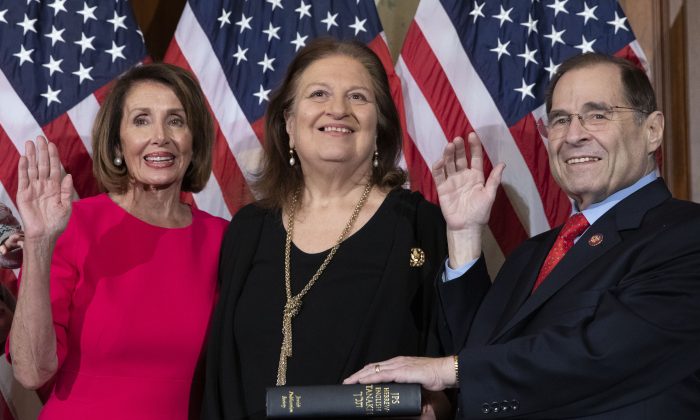 Speaker of the House Nancy Pelosi performs a ceremonial swearing-in for Jerry Nadler (D-NY) at the start of the 116th U.S. Congress in Washington on Jan. 3, 2019. (Alex Edelman/AFP/Getty Images)
Politics

The Democratically controlled House of Representatives voted Friday 236-173 in favor of the Equality Act, which would require schools to include male athletes who identify as transgender girls on female sports teams.

Eight Republicans crossed party lines to vote for the bill, which had unanimous Democratic support.

Among other things, that would force public schools to expand female athletic teams to include biological males who identify as transgender girls.

Republican Florida Rep. Greg Steube introduced a last-minute amendment to the bill that would have preserved Title IX’s protections of female athletic teams, but Democrats rejected it.

Every House Democrat but one co-sponsored the legislation. The only Democrat who wasn’t a co-sponsor, Illinois Rep. Dan Lipinski, announced his support for the bill following pressure from left-wing activists.

Republican Missouri Rep. Vicky Hartzler and a half-dozen other House Republicans held a press conference Thursday in opposition to what Hartzler dubbed the “Inequality Act.”

“Congress enacted Title IX to provide equal opportunities for women in education and sports. All this is erased under H.R. 5,” Hartzler said at the press conference.

“The legislation would make it unlawful to differentiate among girls and women in sports on the basis of sex for any purpose. For example, a sports team couldn’t treat a transgender woman differently from a woman who is not transgender on the grounds that the former is male-bodied,” the former athletes wrote.

“Yet the reality is that putting male- and female-bodied athletes together is co-ed or open sport. And in open sport, females lose,” the three women warned.

“Many states have sexual orientation and gender identity nondiscrimination laws, and all of them still have women’s sports. Arguments about transgender athletes participating in sports in accordance with their gender identity having competitive advantages have not been borne out,” Nadler said at a April 2 hearing on the bill.

In Connecticut, one of the states to which Nadler was referring, two male runners have dominated girls’ high school track. A female competitor called the male runners’ advantage “demoralizing.”