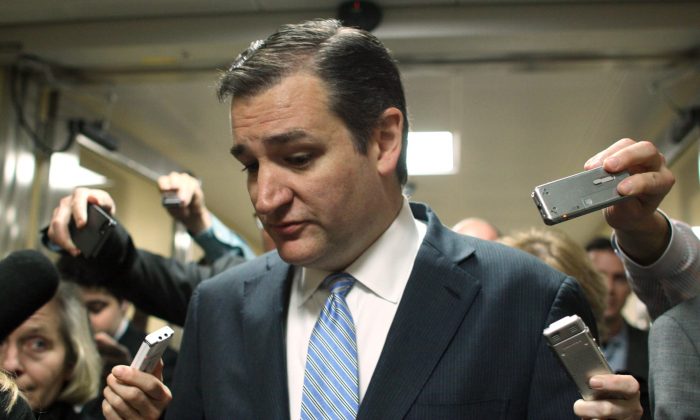 Sen. Ted Cruz (R-Texas) talks with reporters on Capitol Hill in Washington, Friday, Dec. 12, 2014, as the Senate considers a spending bill. The House has passed an additional stopgap spending to make certain the government doesn't shut down at midnight Saturday when current funding authority runs out. The move would give the Senate additional time to process a $1.1 trillion government-wide spending bill. (AP Photo/Lauren Victoria Burke)
Politics

WASHINGTON—The Senate unexpectedly cleared the way Saturday night for swift passage of a $1.1 trillion government-wide spending bill that highlighted fissures inside both political parties in an era of divided government.

The agreement capped a day of intrigue in which Democrats launched a drive to confirm about 20 of President Barack Obama’s stalled nominees before their majority expires at year’s end. Several Republicans blamed tea party-backed Texas Sen. Ted Cruz for creating an opening for the outgoing majority party to exploit.

The spending bill, the main item left on Congress’ year-end agenda, appeared certain to pass and Obama has said he will sign it. It will provide funding for most of the federal establishment through the Sept., 30 end of the budget year, and eliminate any chance of a government shutdown until then.

It faced opposition from Democratic liberals upset about the repeal of a banking regulation and Republican conservatives unhappy that it failed to challenge Obama’s immigration moves.

Immigration was the issue that Cruz seized on late Friday night when he tried to challenge the bill. That led swiftly to the unraveling of an informal bipartisan agreement to give the Senate the weekend off, with a vote on final passage of the bill deferred until early this coming week.

That, in turn, led Reid to call an all-day Senate session to be devoted almost exclusively to beginning time-consuming work on confirmation for as many as nine judicial appointees and an unknown number of nominees to administration posts.

Republicans tried to slow the nomination proceedings, but several voiced unhappiness with Cruz, a potential presidential candidate in 2016. One likened his actions to his role in precipitating a 16-day partial government shutdown more than a year ago.

As the day wore on, senators were forced to spend hour after hour on the Senate floor to cast their votes. One, Sen. Mary Landrieu of Louisiana, sat at her desk on the Senate floor quietly for a while during the afternoon and read a book. By evening, cocktail hour in the East, strains of Christmas carols could be heard from behind the closed doors of rooms that surround the chamber.

Cruz blamed the Democrats’ leader, Sen. Harry Reid of Nevada, saying his “last act as majority leader is to, once again, act as an enabler” for the president by blocking a vote on Obama’s policy that envisions work visas for an estimated 5 million immigrants living in the country illegally.

Cruz said Reid was “going to an embarrassing length to tie up the floor to obstruct debate and a vote on this issue because he knows amnesty is unpopular with the American people, and he doesn’t want the Democrats on the record as supporting it.”

Democrats lost control of the Senate in the November midterm elections, and Republicans will take over when the new Congress convenes in January.

Reid blamed a “small group of Senate Republicans” for the turn of events.

The massive spending bill provides funds for nearly the entire government through the Sept. 30 end of the current budget year.

The sole exception is the Department of Homeland Security, which is funded only until Feb. 27. Republicans intend to try then to force the president to roll back his immigration policy that removes the threat of deportation from millions of immigrants living in the United States illegally.

The legislation locks in spending levels negotiated in recent years between Republicans and Democrats, and includes a number of provisions that reflect the priorities of one party or the other, from the environment to abortion to the legalization of marijuana in the District of Columbia.

One, which drew vehement objections from the Democrats, would repeal a regulation imposed on banks in the wake of the near economic collapse of 2008. Critics called it a bailout, but more than 70 House democrats voted for it previously, and Obama made clear he didn’t view it as a deal-killer.

The list of nominees included Carolyn Colvin to head the Social Security Administration, Vivek Murthy to become surgeon general, Sarah Saldana as head of Customs and Immigration Enforcement and Antony Blinken to the No. 2 position at the State Department.

Democrats did not provide a complete list, saying it might change. More than a dozen judicial nominations remained on the Senate’s calendar, and dozens of appointees to administration positions.

Asked if Cruz had created an opening for the Democrats, Sen. Orrin Hatch, R-Utah said, “I wish you hadn’t pointed that out.”

Hatch added, “You should have an end goal in sight if you’re going to do these types of things and I don’t see an end goal other than irritating a lot of people.”

Added Sen. Jeff Flake, R-Ariz.: “I fail to see what conservative ends were achieved.” He also said he was worried about what the events means for next year, when Republicans are in charge.

“The other concern I have here now is the nominations that are going to get through that otherwise wouldn’t,” said Sen. John Hoeven, R-N.D.

Appearing irritated, some Republicans spoke with Cruz on the Senate floor about his actions. At another point, Cruz huddled in the rear of the chamber with Sen. Mike Lee of Utah, who had supported him on Friday evening, and Sen. Rand Paul of Kentucky, another tea party-backed lawmaker.

The GOP leader, Kentucky Sen. Mitch McConnell, made no public comment on the events, even though Cruz suggested Friday night McConnell and House Speaker John Boehner, R-Ohio, should not be entirely trusted to keep their pledge to challenge Obama’s immigration policy when Republicans gain two-house control of Congress in January.

“We will learn soon enough if those statements are genuine and sincere,” Cruz said.

The $1.1 trillion spending bill provides funds for nearly the entire government through the Sept. 30 end of the current budget year.

The sole exception is the Department of Homeland Security, which is funded only until Feb. 27. Republicans intend to try then to force the president to roll back his immigration policy that removes the threat of deportation from millions of immigrants living in the United States illegally.

The events quickly overshadowed developments in the House earlier in the week, when Democratic divisions were on display over the spending bill.

House Democratic leader Nancy Pelosi of California opposed the bill, and publicly chastised Obama for giving it his support.

From The Associated Press. AP writer Darlene Superville contributed to this story.