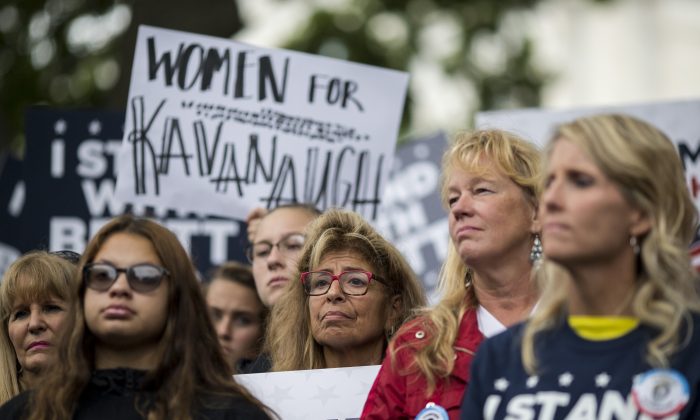 Demonstrators held a rally to support Supreme Court Nominee Brett Kavanaugh on Sept. 27, 2018 in Washington, DC. A feminist writer has labeled the women who supported Kavanaugh as "gender traitors," an example of tribalism encouraged by Democrats. (Zach Gibson/Getty Images)
Viewpoints

The Toxic Tribalism of the New Left

It seems a truism, or at least a reasonable hypothesis, that half of President Donald Trump’s supporters think that he walks on water, while at least half of his critics wish he would drown in it.

Members of the second group would also heave many others into the drink, starting with Kanye West, followed by Senate Republicans, Democratic Sen. Joe Manchin of West Virginia, gun owners, flag wavers, most white men and white women, rednecks, NASCAR fans, police officers, hockey enthusiasts, church-goers, and a partridge in a pear tree.

Too bad about the partridge, but one must be thorough about these things. And unless serious observers of U.S. politics take a lighter view of events now and then, they are likely to drown themselves in despair for the future of their country.

Many Americans in the current generation, as well as those whose front yards once sprouted “I Like Ike” signs, view recent political developments with bewilderment. Without question, America’s faults need to be addressed, but a country founded on Declaration of Independence ideals is equipped to deal with them.

After all, the United States struggled through a “Rebirth of Freedom” in the worst war we’ve ever fought—certainly, another “Rebirth” can take place, assuming optimistically that our country still possesses the right moral tools.

However, this assumption no longer prevails among many of America’s elites. Tribalism, not moral equality, reigns supreme and increasingly has corrupted every aspect of U.S. culture to the point that its divisive effects threaten the survival of the Republic.

What is tribalism? The best way to grasp it is to take the famous words of Martin Luther King Jr.—“I have a dream that my four little children will one day live in a nation where they will not be judged by the color of their skin, but by the content of their character”—and turn them around.

That is, everyone must be judged, accepted or condemned, especially according to race, and much more: gender, ethnicity, family history, country of origin—the list goes on.

Most ominous is the insistence on treating individuals on the basis of group identities and not on the “content of their character.” This is very dangerous territory. The Soviets issued internal passports with nationalities inscribed—no content of character, there—and when the Third Reich ruled Europe, tribalism meant Nazism. In the United States, progressives call it multiculturalism.

Whatever the label, the practical effects of such obsessions are hideous, particularly because individuals are expected to think and act only according to requirements dictated by self-appointed leaders of their “birth” tribe—by race, gender, ethnicity, whatever.

Thus, a committee of old white men can’t be regarded as legitimate questioners for a sensitive member of another tribe, in this case, a woman who accused Judge (now Justice) Brett Kavanaugh of unverifiable sexual advances made 35 years ago; another woman had to be recruited for this job.

Progressives constantly harangue about the importance of “diversity” on the court, by which they mean tribal justices who apply the progressive agenda in their decisions.

For instance, Justice Sonia Sotomayor, who advertised herself as a “wise Latina” during her confirmation hearings, bristled with indignation in the case of Utah v. Strieff, drawing her inspiration from such constitutional geniuses as James Baldwin, W.E.B. Du Bois, and one of the hottest con-law celebrities in recent times, Ta-Nehisi Coates. After all, why should statutory and constitutional law matter when tribal relationships are involved?

Departures from tribal dogma trigger bitter accusations of treason. For instance, members of one of the biggest tribes in the country—women—have been excoriated as “gender traitors” for supporting the president.

Lauren DeBellis Appell noted recently, “We will not go where justice, reason, and the rule of law do not take us.”

This, in response to a New York Times opinion piece by Alexis Grenell, who condemned white women supporters of the president. Further, they (white women) shouldn’t allow their privileged white status to “trump” their “second-class gender status,” which presumably meant that juggling tribal loyalties, though problematic, can still be managed with proper guidance—especially by those who read The New York Times and nothing else that might generate a “rage headache.”

Perhaps the most venomous comments were hurled at Kanye West, who has been characterized by African-American critics as the “token negro of the Trump administration” and “an attention whore.” At the least, they suggest that West should be admitted to a mental institution for mouthing “racially treasonous” thoughts.

This latter suggestion has nightmarish precedents, especially from the Soviet Union, where political dissidents were confined to psychiatric hospitals. The most common diagnosis was “sluggish schizophrenia,” a disorder that afflicted opponents to the Soviet regime; after all, anyone who objects to approved dogma must by definition be mentally ill. Some of the most accomplished individuals in Russian history—Andrei Sakharov and Joseph Brodsky, for instance—suffered this punishment. Their past contributions didn’t matter.

Where does tribalism lead us? About a week after Justice Kavanaugh’s confirmation hearings, cartoonist A. F. Branco published one answer to this question: A hooded donkey wielding a club inscribed with the word “MOBOCRACY” drapes his arm around a wary Uncle Sam figure holding a scroll that says, “Constitutional Republic.” A sneer angles across the donkey-thug’s lips as he says, “Nice country you have here. Be a shame if something were to happen to it.”

For the short term, the answer to the question is, mob rule. For a longer term, imagine the worst.