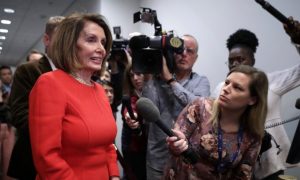 Democrats have only just taken over the majority in the House of Representatives on Jan. 3, yet a rift has already emerged within their ranks over rules that govern votes on government spending.

The old guard, led by new House Speaker Nancy Pelosi (D-Calif.), wants to change the rules to prevent the Trump administration from offsetting additional government spending with cuts. They also want to make it easier to raise taxes. The more far-left progressive wing of the Democrats wants to further relax rules to make it easier to pass several large redistribution schemes they propose.

“Will enough progressives have the courage to vote no on the first roadblock to #MedicareForAll, #GreenNewDeal & #CollegeForAll? Let’s see,” said Warren Gunnels, policy director of Sen. Bernie Sanders in a post to Twitter dated Jan. 1, referring to the new rules.

Rep. Ro Khanna (D-Calif.) responded to the Twitter post on Jan. 2, saying he would vote “no” and called the spending constraints “terrible economics.”

Newcomer Rep. Alexandria Ocasio-Cortez (D-N.Y.), a member of the Democratic Socialists of America, a Marxist organization, replied to Khanna’s post later that day, affirming she had voted “no” as well and calling the rules “a dark political maneuver designed to hamstring progress on health care [plus] other leg.”

Shortly after Pelosi’s Deputy Chief of Staff, Drew Hammill, retorted in a Twitter post saying the rules must be passed to preempt the administration from cutting Democrat spending hikes.

“A vote against the Democratic Rules package is a vote to let Mick Mulvaney make across the board cuts, unilaterally reversing Democratic initiatives and funding increases,” he said in a Twitter post on Jan. 2.

Mulvaney is the acting chief of staff to President Donald Trump as well as the current director of the Office of Management and Budget.

Republicans set up the old rules called CUTGO back in 2011 that require any increase in federal spending to be offset with spending cuts.

The new rules called PAYGO were actually previously put in place by Democrats in 2007, allow for offsetting new spending with tax hikes too.

The progressives would need 18 votes to neutralize their party majority and block the rules package. That threshold increases with every Republican willing to support the package. At least one, Rep. Tom Reed (R-N.Y.), said he would vote, The Washington Post reported.

Way to Evade the Rules

The rules can be waived with a simple majority vote or through designating a bill as “emergency” one.

A 2010 bill, the Statutory Pay-As-You-Go Act (pdf), gives the administration an option to cut spending across the board if Congress does not uphold spending rules. This is what Hammill suggested to be the reason for the PAYGO rule, which would “allow Democrats to designate appropriate offsets” themselves.

But it is unclear whether Trump would be willing to go as far as to make broad cuts. Republicans crossed the rules to pass Trump’s tax cuts, which are projected to increase public debt by nearly $2 trillion over 10 years according to the Congressional Budget Office (CBO). Republicans banked on Americans using the money on productive endeavors to grow the economy, raise tax revenues, and offset increasing debt.

The CBO tried to account for tax cuts boosting the economy in its predictions, but such calculations are notoriously shaky, given the organic complexities of economic development. Trump has criticized the predictions for being too pessimistic.

The economy has indeed boomed as of late, with the national gross domestic product growing at the rates of 4.2 and 3.4 percent in the second and third quarter respectively.

There appears to be little chance to effectively rein in the nearly $22 trillion in public debt without reducing spending. Most federal spending is tied up in Medicare, Social Security, Medicaid, and other such programs.

Trump has pledged to protect Medicare and Social Security from cuts, and instead focus on improving the economy, weaning Americans off food stamps, and other forms of government dependency.

Democrats, and the progressives, in particular, have the opposite idea. The promise of “Medicare for all” pushed by Ocasio-Cortez and other birds of a feather would cost $32.6 trillion over 10 years, according to a study commissioned by the Mercatus Center at George Mason University. One author of the study accused Ocasio-Cortez and Sanders of misinterpreting the study’s results after saying the plan would actually save money.

Seema Verma, administrator for the Centers for Medicare & Medicaid Services, has a more skeptical view.

“As head of the agency that serves over 58 million Medicare beneficiaries, I deal first-hand with the challenges of government-run health care,” she said in a Nov. 2 blog post. “The answer to the skyrocketing cost curve is not greater government intervention, leading to the evisceration of the private insurance marketplace but just the opposite: increase choices, unleash private competition, innovation, and lighten regulations on plans, doctors and providers.”

However, the progressives appear to have gained concessions for their plans in the rules package. If a budget appropriations bill, for instance, exceeds spending caps, the House would no longer need to hold a separate vote to increase deficit limits.

The rules also drop the requirement on CBO to estimate the impact of legislation on the economy and future government revenues. An economy-killing bill would thus seem more benign on paper, while economy-stimulating bill could look more expensive.