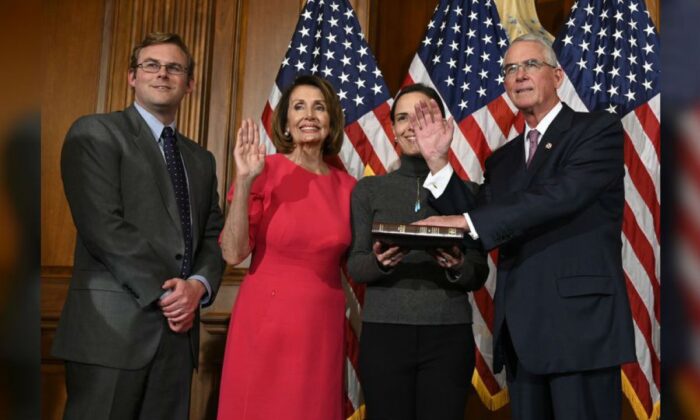 More than $3 million of taxpayers’ money was spent by House Democrats in under three months on pursuing President Donald Trump’s impeachment, according to research from the Heritage Foundation.

According to the research, taxpayers forked up an estimated $3.06 million toward House Democrats’ impeachment efforts, which on Dec. 18 saw the House of Representatives vote to oust Trump on two articles of impeachment.

So far, the sum includes the money spent on the fees for six attorneys, the time staff have spent preparing for hearings, and the salaries of 106 congressional staffers from the House Intelligence Committee, the Judiciary Committee, and the Oversight and Reform Committee, who worked on impeachment from Sept. 24 to Dec. 13, reported the Daily Signal.

The staffers whose salaries were analyzed by the Heritage Foundation were mentioned in reports or testimony, or their job descriptions indicated they were likely involved in the proceedings.

The actual sum spent by House Democrats is likely higher, the Foundation suggested, as the figure does not include the fees for U.S. Capitol Police working overtime when House hearings ran late, witnesses’ travel costs, supplies and materials, or executive branch expenses.

Trump became the third president in U.S. history to be impeached—his impeachment marking the most partisan in U.S. history, with all of the Republicans voting no on the resolution.

Two Democrats—Rep. Jeff Van Drew (D-N.J.) and Rep. Collin Peterson (D-Minn.)—broke ranks with their party to vote no on the first article of impeachment. Rep. Justin Amash, an independent from Michigan who left the Republican Party earlier this year, voted with the Democrats. Rep. Jared Golden (D-Maine) joined Van Drew and Peterson in voting no on the second article of impeachment. Rep. Tulsi Gabbard (D-Hawaii) voted “present” on both articles.

The impeachment resolution alleges that Trump abused the power of his office by pressuring Ukraine to investigate a political rival and that the president obstructed justice when Democrats began to investigate the matter. The president has vehemently denied both allegations.

Republicans say impeachment is a partisan effort to overturn the results of the 2016 presidential election. Democrats say their support of the resolution stems from a constitutional duty.

Trump has slammed the process as a hoax and called the impeachment an “ASSAULT ON AMERICA” on Twitter just hours before the vote.

Responding to the results of the impeachment vote, Brad Parscale, Trump’s 2020 campaign manager, described the process as a “cold, calculated, and concocted … sham.”

“And the only part of the vote that was bipartisan was in opposition. The president is just getting stronger while support for the Democrats’ political theater has faded,” Parscale said in a statement. “Undeterred, President Trump keeps racking up victories for the American people, who will respond by resoundingly reelecting him next November.”

The White House Press Secretary said Trump’s “sham” impeachment marks “the culmination in the House of one of the most shameful political episodes in the history of our nation.”

“Without receiving a single Republican vote, and without providing any proof of wrongdoing, Democrats pushed illegitimate articles of impeachment against the president through the House of Representatives. Democrats have chosen to proceed on this partisan basis in spite of the fact that the president did absolutely nothing wrong.”

Trump was denied fundamental fairness and due process under the law, the statement continued.

“The House blatantly ignored precedent and conducted the inquiry in secrecy behind closed doors so that Chairman Adam Schiff and his partisan political cronies could selectively leak information to their partners in the media to push a false narrative.”

Having cleared the House, the Democrats’ impeachment articles will be sent to the Senate, which will hold a historic trial in 2020 on whether to acquit the 45th president or convict and remove him from office.

“The president is confident the Senate will restore regular order, fairness, and due process, all of which were ignored in the House proceedings,” the press secretary statement read. “He is prepared for the next steps and confident that he will be fully exonerated. President Trump will continue to work tirelessly to address the needs and priorities of the American people, as he has since the day he took office.