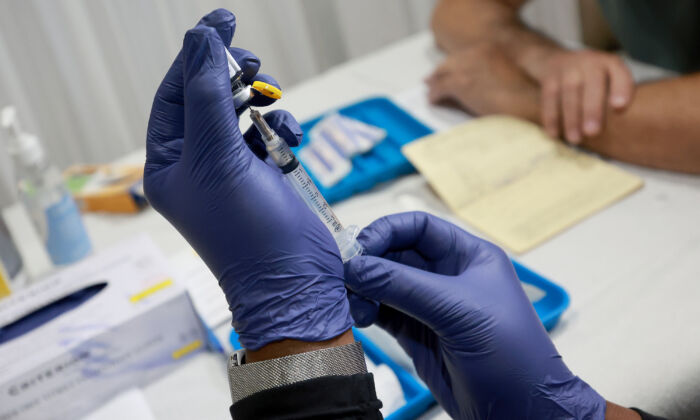 A healthcare worker prepares to administer a vaccine to a person for the prevention of monkeypox the Pride Center in Wilton Manors, Florida, on July 12, 2022. (Joe Raedle/Getty Images)
US News

The Biden administration is facing criticism from Democrats over the pace of its rollout of vaccines against the monkeypox virus.

In California, Democratic state Sen. Scott Wiener said San Francisco is “veering toward a public health mess of uncontrolled monkeypox spread” in the city and others due to the shortage of vaccines.

“Today, the San Francisco Department of Public Health (DPH) announced that the Department is about to run out of monkeypox vaccine,” Wiener said in a July 13 statement.

“We need to be very clear where the responsibility lies for this completely avoidable situation: the federal government,” said Wiener. “Failure to control this outbreak will result in intense—and completely unnecessary—misery for many people, particularly gay and bisexual men.”

Monkeypox, a viral disease that causes fever-like symptoms, skin lesions, and is occasionally fatal, is primarily spreading among gay and bisexual men.

According to the Centers for Disease Control (CDC), nearly 1,500 cases have been identified across the nation by July 15, with 266 reported in California, second only to New York City.

In San Francisco alone, monkeypox has infected 86 people since the first probable case was identified on June 3. The city is already administrated 2,234 vaccines as of Friday.

Health officials said that it was running low on the monkeypox vaccine and that the walk-in clinic would be closed from July 13 until new vaccines arrive. Other sites in the city are likely to run out by July 15.

In the letter, Wiener acknowledged that the city would get more vaccines “shortly,” but added that “the amount will still be quite limited.”

According to the latest update from the city’s health department, San Francisco was scheduled to receive more than 4,000 doses of the monkeypox vaccine this week.

“We need an enormous amount of additional vaccine doses, and we need it immediately,” Wiener stated.

“The federal government’s failures are threatening to deeply harm our community. Once we move past this emergency, we need accountability for these failures—failures that put people’s lives and health in jeopardy,” Wiener said.

Call for Vaccines in New York

The statement comes as the Biden administration receives mounting criticism for its response to the monkeypox outbreak, especially the failure to secure a million doses of vaccines it purchased in Denmark.

“We cannot wait any longer to take action against the spread of monkeypox,” de Blasio wrote on Twitter.

The Health Department said that New York City, the epicenter of the monkeypox outbreak in the United States, does not have a sufficient amount of vaccines to protect those who need them and stem the spread of the infection.

As of July 15, New York City reported 461 cases of monkeypox, accounting for a third of the total infections in the country.

Rochelle Walensky, direct of U.S. Centers for Disease Control and Prevention, said at July 15 briefing that the monkeypox outbreak is expected to grow in the coming weeks.

The Department of Health and Human Services on July 15 ordered an additional 2.5 million doses of vaccine, which will arrive next year.

Katabella Roberts contributed to the report.