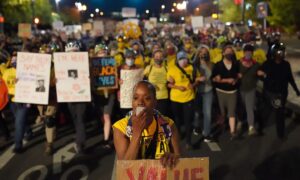 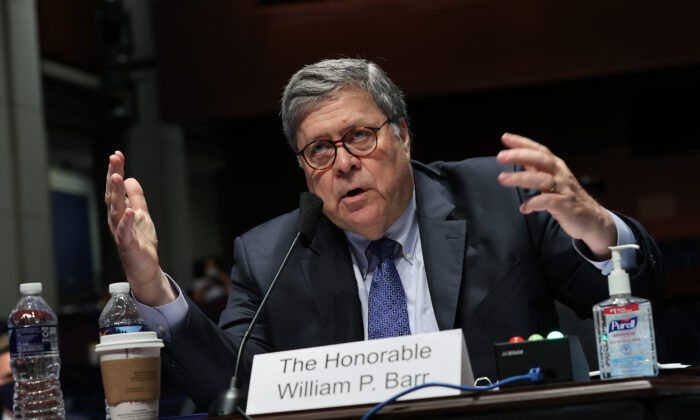 Democrats Silent on Burning of Courts are ‘Cowards,’ Says Barr

Attorney General William Barr on Aug. 9 criticized members of the Democratic Party who, during a hearing before the House Judiciary Committee last month, remained silent on the burning of federal courts amid riots that followed the police custody death of George Floyd.

Barr made the remarks during an interview that aired Aug. 9 with Mark Levin on Fox News, referring to the recent attacks on federal buildings, which have been targeted and vandalized by rioters amid weeks of civil unrest.

Amid the unrest, federal security forces were sent to Portland in early July to protect federal buildings such as the Mark O. Hatfield federal courthouse. The move has been criticized by both the governor of Oregon and Portland’s mayor, both Democrats.

“I said during my hearing, can any of you just come out and say that it’s not OK to burn down federal courthouses?” Barr said, referring to the Department of Justice (DOJ) oversight hearing on July 28, during which he defended his independence amid accusations by House Democrats that he had politicized the DOJ in an effort to secure favors for President Donald Trump.

“They [Democrats] talk about the rule of law, the importance of the federal legal system … the protection of civil rights. At the heart of that is our court system, and not one of them piped up saying, ‘No it’s not OK to be burning down federal courts.’”

The Mark O. Hatfield federal courthouse in downtown Portland has in recent weeks become a nightly battleground, with rioters clashing with federal officers. The Department of Homeland Security sent assets to the city to help protect the courthouse and other federal properties, and they eventually erected a fence around the building, which has mostly kept rioters at bay.

Barr said Democrats now believe in “tearing down the system” and pursue absolute victory as “a substitute for religion.”

“I have the perspective of having been attorney general 30 years ago and now, and I thought things were partisan and tough 30 years ago. [It was] nothing compared to today; things have fundamentally changed,” he said.

“In the old days … politics was part of your life, but it wasn’t all consuming, it wasn’t everything, you could have communications and so forth with others … but it’s now become all-consuming for many people.

“I think what’s happened is that the left-wing has really withdrawn and pulled away from the umbrella of classical liberal values that have undergirded our society since our founding. And within the family, we’ve had two ways of resolving disputes. One is discussion, the dialectic, the marketplace of ideas, trying to arrive at the truth.

“We had an idea that there was some truth to arrive at. And then if we couldn’t reach agreement, a vote, and that’s how we operated.”

Barr added that he believes the left has now “essentially withdrawn from this model” and instead represents a “Rousseauian revolutionary party that believes in tearing down the system.”