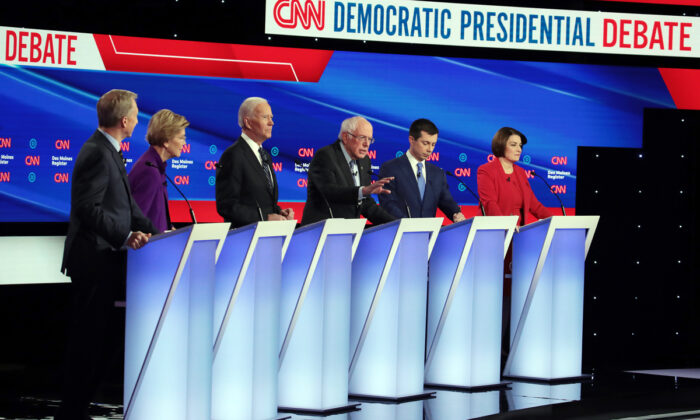 Democrats Should Put an End to Caucuses

“It is quite astonishing to see with what deadpan and neutral a tone our press and television report the open corruption—and the flagrantly anti-democratic character—of the Iowa caucuses.”

I quote the late Christopher Hitchens, because I couldn’t put it better.

In a primary, eligible voters can show up anytime while polls are open, cast anonymous ballots and go home. In the caucuses, they must show up on a winter night and spend several hours jostling with neighbors and strangers as they show support for one candidate or another.

This setup favors activists who are not deterred by snow, cold, and the dark. They tend to be educated and have the luxury of free evening hours. They’re also aggressive and skilled in working the intricacies of the caucus process.

The caucuses disfavor working people who must juggle two children and three jobs. Add to that anyone who works nights at McDonald’s or drives an Uber after hours. Or who depends on a public transportation system that slows down in the evening.

The obvious winners in this unfair setup are candidates with passionate followers. Bernie Sanders has notably been a beneficiary. In 2016, he did better in the caucuses, where his activists could exert control, than in the primaries, where a wider electorate cast simple ballots without pressure.

Caucuses routinely suppress voter participation, according to the Lawyers’ Committee for Civil Rights Under Law. In 2016, turnout at the Iowa caucuses was under 16 percent, whereas the New Hampshire primary attracted 52 percent of eligible voters.

Washington state, which held both a caucus and a primary in 2016, offered a real-world contrast of the two. In March that year, Sanders swept Washington’s Democratic caucus, walking off with 74 delegates to Hillary Clinton’s 27. When Washington held a primary two months later, Clinton won by 6 percent.

Only about 26,000 people “voted” in the Democratic caucuses, while more than 660,000 voted in the primary. The state Democratic Party is switching to a meaningful primary in 2020.

Were caucuses how a conservative state ran a general election, liberals would rightly accuse election officials of practicing voter suppression. The Supreme Court might even strike down its election laws as unconstitutional. But this is a party matter, and it’s up to the Democratic National Committee to fix the problem.

In assessing a candidate’s ability to prevail in a general election, some members of the punditry put great importance on the level of voter enthusiasm. Should that matter? It shouldn’t, not in a democracy. Votes are supposed to be equal. A vote cast with mild affection or indifference—even with nose held—counts every bit as much as a vote made with thumping heart.

Some friends, particularly younger ones, worship the ground Bernie walks on. I back Joe Biden, but don’t adore him. (I could be happy with another moderate, say, Amy Klobuchar or Pete Buttigieg.) To me, Biden is a solid progressive and, more importantly, the Democrat whom President Donald Trump most fears.

What excites me, though, in a bad way, is the belief that a Sanders nomination—or his trashing of the actual Democratic nominee, as he did in 2016—would deliver another four years to Trump.

Whatever the results in the Iowa caucuses, one can be confident that they will leave an exaggerated impression of the level of Sanders’s support. They will reveal the preference of a tiny slice of a tiny slice of the electorate and, in the Democrats’ case, of an electorate more heavily weighted toward the white liberal gentry than the party at large.

Only the Democratic Party can end this undemocratic means of choosing its nominees. And it should.