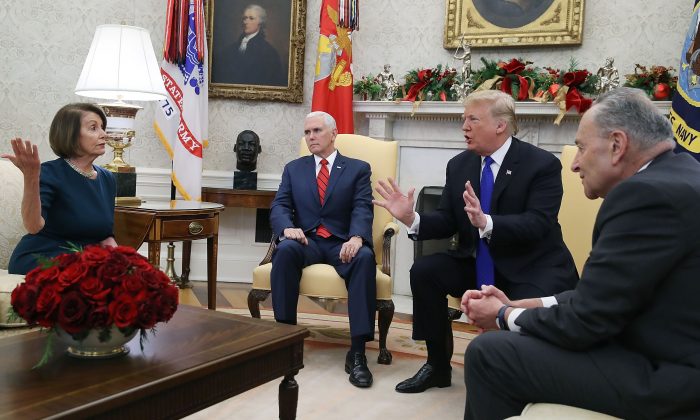 Bill would fund Department of Homeland Security until Feb. 8 without funding for a border wall
By Petr Svab

Democratic leaders have proposed to end the partial government shutdown and delay a decision on border wall funding until February.

“Democrats have offered two bills which separate the arguments over the wall from the government shutdown,” Senate Minority Leader Chuck Schumer (D-N.Y.) and House Minority Leader (and presumptive Speaker of the House) Nancy Pelosi (D-Calif.) said in a joint statement on Dec. 31.

Meanwhile, President Donald Trump is keeping an open invitation for the Democrats to negotiate the issue.

About a quarter of the federal government ran out of money Dec. 22 after Democrats refused to give Trump $5 billion for border wall construction—his core campaign promise—and he has refused to sign a funding bill without it.

Republican lawmakers have previously backed the DHS stop-gap measure, but Trump has pushed them to reverse course and make a stand on the wall funding.

Democrats have called the wall project ineffective and expensive, despite previously backing construction of 700 miles of border fencing as part of a 2013 bill that also included a path to citizenship for illegal immigrants.

Trump asked for 500 to 550 miles of a wall or a steel slat fence, saying other parts of the border already have natural barriers, such as mountains.

Border Patrol officials have repeatedly called for a wall in certain areas.

Trump seemed less than enthused by the Democrats’ proposition.

“The Democrats, much as I suspected, have allocated no money for a new Wall. So imaginative!” he said in a Jan. 1 tweet. “The problem is, without a Wall there can be no real Border Security – and our Country must finally have a Strong and Secure Southern Border!”

Schumer and Pelosi complained that Trump didn’t offer “any plan that can pass both chambers of Congress.”

Trump, meanwhile, repeatedly called on the Democrats to come negotiate on a way out of the shutdown.

“Border Security and the Wall ‘thing’ and Shutdown is not where Nancy Pelosi wanted to start her tenure as Speaker! Let’s make a deal?” he said in a Jan. 1 tweet.

On Jan. 1, Trump invited Schumer and Pelosi to a bipartisan briefing on border security at the White House, unidentified congressional sources told Reuters, saying the event isn’t a negotiating session and, according to one source, was set for Jan. 2.

It wasn’t clear if Schumer and Pelosi would attend the briefing. The White House didn’t immediately respond to a request for comment on the briefing’s specifics.

As for what the wall should look like, Trump clarified in a Dec. 31 tweet that “some areas will be all concrete but the experts at Border Patrol prefer a Wall that is see-through (thereby making it possible to see what is happening on both sides).”

On Dec. 28, Trump said he will close the southern border altogether if Congress doesn’t approve the wall funding and deliver immigration reform. That would hurt business on both sides, though more on the Mexican one, since the country runs a trade surplus with the United States.

The influx of illegal border crossers, especially from Central America, has intensified in recent months. The Border Patrol apprehended more than 123,000 people trying to cross the southeast border illegally in October and November combined, compared to less than 100,000 over the two months before.

Trump is open to offer Democrats something in return for approving funds for a border wall, Sen. Lindsey Graham (R-S.C.) said after lunching with the president on Dec. 31.

Graham told media he proposed to Trump a plan where he gets the wall money, while Democrats would get temporary protection from deportation for illegal immigrants that came to the United States as children.

“I think that’s in the realm of possibility,” he said. “The president didn’t commit. But I think he’s very open minded.”

The temporary protections would extend to about 700,000 who can already apply for protection and work permits under the Deferred Action for Childhood Arrivals (DACA), a program set up by an executive action of Trump’s predecessor Barack Obama. Trump nixed the program, which was broadly regarded by Republicans as an executive overreach. But a federal judge put Trump’s action on hold.

Graham’s proposal would protect those eligible for DACA for three years, a measure previously backed by Schumer. The White House didn’t immediately respond to a request to comment on Graham’s proposal.

Graham also proposed to include in the deal a reform of the Temporary Protected Status program, which lets nationals of certain countries stay in the United States if they left their homes to escape wars, disasters, or “other extraordinary and temporary conditions.”

Trump ended the program for Sudan, Nicaragua, Haiti, and El Salvador, but again, a federal judge put his decision on hold.

In July, the administration extended the program for Somalia and Yemen. But it’s scheduled to expire in 2019 for Nepal, South Sudan, and Syria.

“There’s a lot of sympathy for this population in the Congress,” Graham said.

Trump called the proposal “interesting,” Graham said. “Hopefully we can get some serious discussion started, maybe as soon as next week.”

Yet Graham also took off the table any deal that wouldn’t include at least “border security/wall/fencing—whatever you want to call it—in areas that make sense.”

“There’ll never be a deal, at the end of this year, the beginning of the next, that doesn’t have money for the physical barriers that we all have in the past agreed we need,” he said.

“The President is not asking for too much. … The question is, can we stop hating each other enough up here to find a way forward that’d be a win-win.”