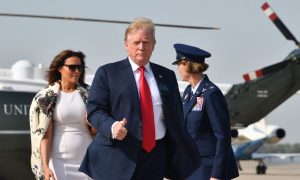 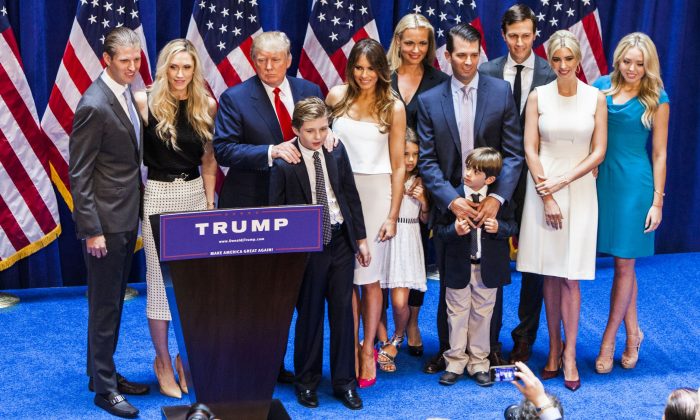 President Donald Trump, three of his children, and seven of his companies filed a federal lawsuit on April 29 against Deutsche Bank and Capital One Financial Corp. to block the banks from complying with congressional subpoenas that seek the family’s banking and financial records.

The federal lawsuit, filed in the U.S. District Court’s Southern District of New York, contended that demands for records by Democrat-controlled House committees have no legitimate or lawful purpose and are so broad they would include transaction records on the Trump family’s personal shopping.

“The subpoenas were issued to harass President Donald J. Trump, to rummage through every aspect of his personal finances, his businesses, and the private information of the President and his family,” the lawsuit stated.

It also stated that the Democrats hope “they will stumble upon something they can expose publicly and use as a political tool against the President.”

Rep. Maxine Waters (D-Calif.), chairwoman of the Financial Services Commission, and Rep. Adam Schiff (D-Calif.), chairman of the Intelligence Committee, called the lawsuit “meritless” in a joint statement, The New York Times and other media reported.

On April 15, two U.S. House of Representatives committees issued subpoenas to multiple financial institutions for information on Trump’s finances. Both banks have been involved in Trump’s real estate empire.

The committees need to have a legislative purpose for their action and have justified the subpoenas as a part of an investigation of “potential foreign influence on the U.S. political process” or the use of the financial system for “illicit purposes.”

“The potential use of the U.S. financial system for illicit purposes is a very serious concern. The Financial Services Committee is exploring these matters, including as they may involve the president and his associates, as thoroughly as possible,” Waters said in an earlier statement.

Schiff said previously in a statement the subpoenas issued included a “friendly subpoena to Deutsche Bank.”

Schiff, Waters, and other Democrats had consistently accused Trump of being in “collusion” with the Russian government—an allegation that goes back to 2016, when the Democratic Party and the presidential campaign of former Secretary of State Hillary Clinton were seeding rumors that the Trump campaign worked with Russia to influence the elections. After more than two years of investigations, Trump and his associates were cleared of those allegations by special counsel Robert Mueller.

Trump’s suit complains that the subpoenas are “intrusive and overbroad” and seek information that “long predates the President’s election to office, reaches well beyond transactions associated with foreign parties, and encompass reams of account records for entities, individuals, children, and spouses who have never even been implicated in any probe.”

The suit says that Schiff and Waters refused to share the subpoena with the plaintiffs or even reveal any information about their content, “notwithstanding their willingness to discuss the subpoenas with the press.”

From what the plaintiffs learned from Deutsche Bank, Capital One, and public statements of Schiff and Waters, the subpoenas demand all banking and financial records, including “records of every single checking withdrawal, credit-card swipe, or debit-card purchase—no matter how trivial or small—made by each and every member of the Trump family.”

“The dates and times when these individuals purchased books, groceries and other personal items is not the business of the House of Representatives or anyone else,” the suit says.

The plaintiffs learned the lawmakers seek records reaching back to 2010 and some documents, such as account applications and opening documents, without any time limitations.

The banks told the plaintiffs that they intend to start handing over the documents on or by May 6.

A representative of Deutsche Bank said in a statement: “We remain committed to providing appropriate information to all authorized investigations and will abide by a court order regarding such investigations.”

Trump has recently said that he intends to defy any efforts from the Democrats to dig into his affairs.

His suit, which includes The Trump Organization Inc. and Trump’s three eldest children, Donald Jr., Eric, and Ivanka, stated that the court has the power to declare the subpoenas invalid.

Schiff’s and Waters’s offices didn’t respond to requests for comment.

After gaining a majority in the House of Representatives in January, Democrats have vowed to use their oversight powers to investigate the president, including the dealings of his real estate empire.

Aside from Schiff and Waters, Rep. Elijah Cummings (D-Md.), chair of the House Oversight and Reform Committee, issued a subpoena to Trump’s accounting firm, Mazars USA, for his financial records. Trump sued to block the subpoena.

He said he would provide the committee with a final decision by May 6 after receiving the Justice Department’s legal conclusions.