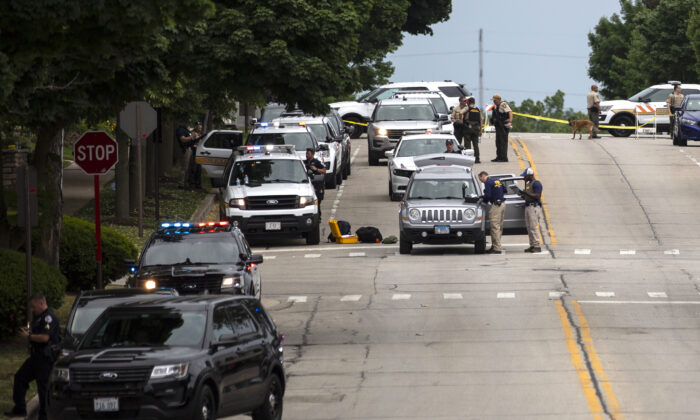 Law enforcement works the scene after a mass shooting at a Fourth of July parade in Highland Park, Ill., on July 4, 2022. (Jim Vondruska/Getty Images)
Democrats

Biden then suggested that he will support more gun laws. “I recently signed the first major bipartisan gun reform legislation in almost thirty years into law, which includes actions that will save lives. But there is much more work to do, and I’m not going to give up fighting the epidemic of gun violence,” the statement said.

On Tuesday, Sen. Dick Durbin (D-Ill.), the No. 2 Democrat in the Senate, called for more restrictions on purchasing certain types of rifles.

“Let me tell you, we all know, at least some of us do, it’s not enough,” Durbin told CNN. “You know, [that] they still think that a shooter can buy a weapon that is really designed for the military to kill people in volume, and has no sport or hunting purpose, and turn that weapon loose on an innocent crowd in Highland Park tells us there’s much more to be done.”

Fellow Illinois Sen. Tammy Duckworth, a Democrat, also issued a statement after Monday’s shooting and claimed that “we can’t stop there,” adding Congress has to “pass additional commonsense reforms.” She did not elaborate.

And Sen. Ed Markey (D-Mass.) agreed that Congress should take up new gun control measures, according to a Twitter post he made after the mass shooting.

In 2013, Rotering signed an ordinance (pdf) that banned certain types of firearms that the city deemed as assault rifles. And, according to the Giffords Law Center, a group that supports gun control measures, Illinois has among the strictest gun laws in the United States. The group gave the state an “A-” grade in 2021, alongside New York state, Massachusetts, Maryland, and Connecticut.

Chicago, meanwhile, has even stricter gun rules. For example, in 2013, Chicago, Cook County, and several other Chicago-area suburbs banned firearms that they defined as “assault weapons.”

During an interview with NBC News on Tuesday, Rotering said she knew the shooting suspect, identified as 22-year-old Robert Crimo III, when he was a child and called for stricter gun laws later in the interview.

Crimo is suspected of opening fire at a Fourth of July parade, killing at least six people and injuring two dozen more. Officials have not established a motive in the case, although videos he uploaded online contained violent imagery and themes.

The shooting comes after Congress passed legislation that included red flag laws and ends on straw purchases, but top Republicans signaled this week they aren’t going to support new rules.

“I think yesterday’s shooting is another example of what the problem is,” Senate Minority Leader Mitch McConnell (R-Ky.) told reporters Tuesday, according to NBC News. “The problem is mental health and these young men who seemed to be inspired to commit these atrocities.”