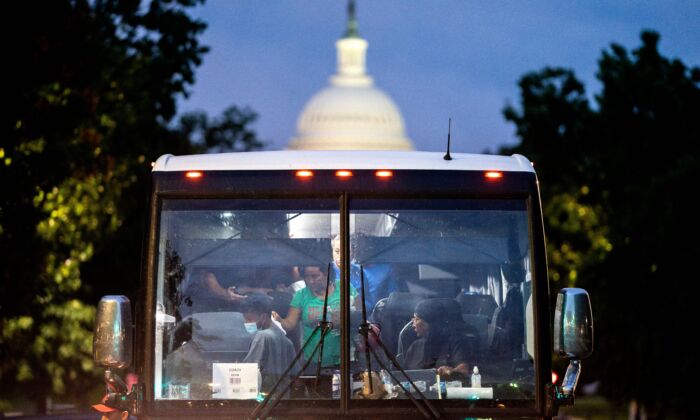 Illegal immigrants, who boarded a bus in Texas, are dropped off within view of the U.S. Capitol building in Washington on Aug. 11, 2022. (Stefani Reynolds/AFP via Getty Images)
Democrats

A group of House Democrats on Friday requested an additional $50 million for FEMA’s Emergency Food and Shelter Program (EFSP) as Washington, New York City, and Chicago to cope with an influx of illegal immigrants.

Norton said that the Democrats wrote to the heads of the Homeland Security Appropriations subcommittee requesting an additional $50 million be included in FEMA’s 2023 budget for EFSP.

“The EFSP provides federal funding for food, shelter, and other necessities. In FY 2022, Congress provided $150 million to this program for humanitarian assistance for migrants,” they wrote in the letter (pdf).

“As of July 21, 2022, approximately $85 million of this funding remained available. However, the busing of migrants to D.C., New York City, and Chicago and resettlement in cities like Boston has increased funding requests across the Northeast and the Midwest. Without additional funding, the EFSP may exhaust its funding.”

The Democrats took aim at Texas and Arizona’s Republican governors, Gregg Abbott and Doug Ducey, for their programs to bus apprehended illegal immigrants who claim asylum to Democrat-run cities with so-called sanctuary policies.

“Since mid-April, the governors of Texas and Arizona have exploited and harmed approximately 10,000 vulnerable people fleeing desperate and dangerous situations in their home countries for political gain by busing them to D.C., New York City, and Chicago,” the Democrats wrote in the letter.

To help border communities in Texas deal with the influx of illegal immigrants Abbott issued a disaster declaration in 48 counties in May to augment additional resources to efforts addressing the immigration crisis at the border (pdf).

The White House in late August denied that illegal immigrants are simply walking across the border, but Texas Department of Public Safety (DPS) Lt. Chris Olivarez has said, “that is completely false.”

“They are walking across, in fact,” Oliverez told Newsmax on Sept. 2. “They are walking across from their country of origin, where they’re coming from. When they get to Mexico they’re paying a criminal organization to be smuggled into the United States, where they have to cross a river, or … in most severe cases, they’re having to cross the desert or mountainous terrain, like in West Texas.”

Oliverez said illegal immigration numbers shot up to “unprecedented” numbers in early 2021, including of unaccompanied minors.

Under Operation Lone Star, state law enforcement were directed to interview unaccompanied minors, or children who illegally enter the country without an adult, to identify victims of human trafficking.

More than 7,900 illegal immigrants have been bused from Texas to D.C. since April and over 2,200 to New York City since August, and 300 to Chicago, according to Abbott’s office.

“The busing mission is providing much-needed relief to our overwhelmed border communities,” the Texas governor’s office said in a statement on Friday.

It has cost the Texas Division of Emergency Management over $12 million to transport “migrants processed and released by the federal government in Texas border communities,” the agency told the El Paso Times.

During Operation Lone Star, Texas DPS and the Texas National Guard apprehended 302,600 illegal immigrants and made more than 19,700 criminal arrests, with over 17,200 felony charges reported, according to Abbott’s office.

Authorities have also seized over 340.5 million lethal doses of fentanyl during the border mission, which “would have otherwise made their way into communities across Texas and the nation due to President Biden’s open border policies.”