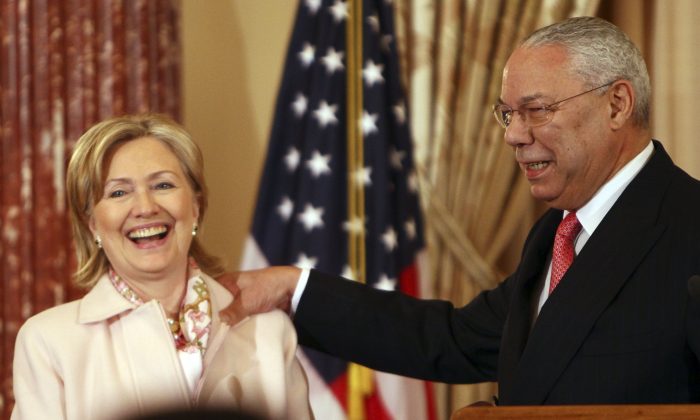 House Democrats on Thursday released an email exchange between former secretaries of state Hillary Clinton and Colin Powell in which he advised her on the use of a personal email account.

The messages, shared by Rep. Elijah E. Cummings (D-MD), Ranking Member of the House Committee on Oversight and Government Reform, were sent two days after she was sworn in as secretary of state.

The emails show Clinton reaching out to Powell for advice.

“What were the restrictions on your use of your blackberry? Did you use it in your personal office? I’ve been told that the DSS personnel knew you had one and used it but no one fesses up to knowing how you used it! President Obama has struck a blow for berry addicts like us. I just have to figure out how to bring along the State Dept. Any and all advice is welcome,” Clinton wrote in the email.

Powell responded saying he did not have a blackberry but had a personal computer that was hooked up to a private phone line.

“I could communicate with a wide range of friends directly without it going through the State Department servers. I even used it to do business with some foreign leaders and some of the senior folks in the Department on their personal email accounts. I did the same thing on the road in hotels,” Powell said in the email.

He said the “real issue” had to with PDAs (personal digital assistants) because Diplomatic Security did not allow them into secure spaces.

Powel wrote in the email:

“When I asked why not they gave me all kinds of nonsense about how they gave out signals and could be read by spies, etc. Same reason they tried to keep mobile phones out of the suite. I had numerous meetings with them. We even opened one up for them to try to explain to me why it was more dangerous than say, a remote control for one of the many tvs in the suite. Or something embedded in my shoe heel. They never satisfied me and NSA/CIA wouldn’t back off. So, we just went about our business and stopped asking. I had an ancient version of a PDA and used it. In general, the suite was so sealed that it is hard to get signals in or out wirelessly.”

Powell then warned Clinton and told her to be “careful.”

“However, there is a real danger. If it is public that you have a BlackBerry and it it [sic] government and you are using it, government or not, to do business, it may become an official record and subject to the law,” he said.

“Be very careful. I got around it all by not saying much and not using systems that captured the data,” added Powell.

“This email exchange shows that Secretary Powell advised Secretary Clinton with a detailed blueprint on how to skirt security rules and bypass requirements to preserve federal records, although Secretary Clinton has made clear that she did not rely on this advice,” said Cummings in a statement.

Powell responded to the revealed messages saying Clinton stated that she was not influenced by his email in making her decision on the use of her private email server.

“I was not trying to influence her but just to explain what I had done eight years earlier to begin the transformation of the State Department’s information system,” Powell told Politico.

He then said the emails he sent would have found their way to State Department servers.

“With respect to records, if I sent an email from my public email account to an addressee at another public email account it would not have gone through State Department servers. It was a private conversation similar to a phone call. If I sent it to a state.gov address it should have been captured and retained by State servers,” Powell said.

“I was not aware at the time of any requirement for private, unclassified exchanges to be treated as official records,” he added.

Last Friday the FBI released a summary of an interview it did with Clinton as part of its investigation into her handling of classified information.

The summary says Clinton sent an email to former Secretary of State Colin Powell on Jan. 23, 2009, to inquire about the use of a BlackBerry while she served in office.

Meanwhile, Powell said last month that Clinton’s team is trying to blame him for her use of a private email server.

“Her people have been trying to pin it on me,” Powell told People at the Apollo in the Hamptons 2016 Night of Legends event.

“The truth is, she was using [the private email server] for a year before I sent her a memo telling her what I did,” he added.