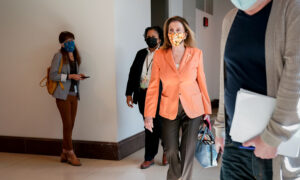 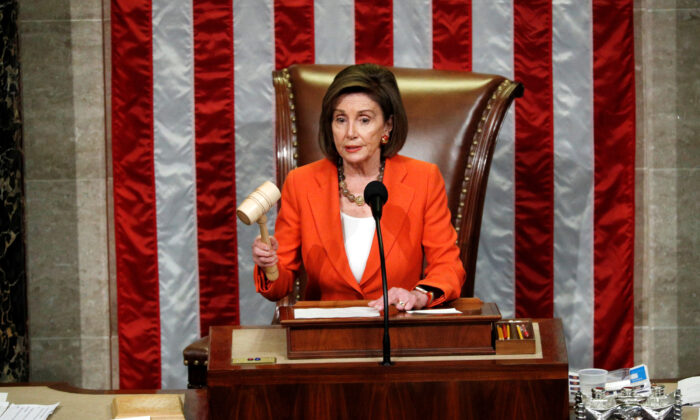 Speaker of the House Nancy Pelosi wields the gavel as she presides over the House of Representatives on Capitol Hill in Washington on Oct. 31, 2019. (Tom Brenner/Reuters)
2020 Election

House Democrats on Nov. 18 voted to back Speaker Nancy Pelosi (D-Calif.) to remain in her position for another two years, despite congressional setbacks suffered by Democrats during the Nov. 3 election that gave the caucus one of the slimmest majorities in recent memory.

Pelosi ran unopposed among Democrats to secure the nomination, but she will have to net 218 votes during the full House floor in January. After the 2018 midterm election, several Democrats broke ranks and didn’t select her. Democrats lost several seats this time around.

“Congratulations to @SpeakerPelosi, once again elected by House Democrats to be our fearless leader and nominee for Speaker of the House for the 117th Congress! #DownWithNDP #ForThePeople,” the House Democrats account wrote on Twitter.

House Majority Leader Steny Hoyer (D-Md.) and House Majority Whip Jim Clyburn (D-S.C.) were also elected, according to the account. Rep. Hakeem Jeffries (D-N.Y.) was elected to serve as the chairman of the House Democratic Caucus.

Congratulations to @SpeakerPelosi, once again elected by House Democrats to be our fearless leader and nominee for Speaker of the House for the 117th Congress! #DownWithNDP #ForThePeople

Following Election Day, there was speculation that Democrats wouldn’t be able to come to an agreement to unite behind Pelosi in the House.

House Minority Leader Kevin McCarthy (R-Calif.) said on Nov. 8 that Pelosi could face difficulties from her own caucus.

“To become speaker, you have to have 218 votes on the floor,” he told Fox News at the time. “When she went up for that vote two years ago, there were 15 Democrats who voted against her.”

McCarthy added: “Ten of those Democrats will be coming back to Congress. If those 10 vote against her again, she will not be speaker of the House … because of the gains of the Republicans.”

With a smaller majority, Democrats in the House will also have a smaller margin of error in crafting legislation. Some centrist Democrats, meanwhile, have criticized the party’s lurch toward socialism.

“I think that the Democratic Party needs to clearly push that we are not supportive of ideas like socialism or defunding the police or anti-Semitism,” said Rep. Stephanie Murphy (D-Fla.), a co-chair of the House’s centrist Blue Dog Coalition, according to The Associated Press earlier this month.

But despite the losses and critical feedback, Pelosi defended the job she’s done.

“I take credit for winning a majority and holding the House,” Pelosi told reporters last week.

The race for Democratic Congressional Campaign Committee chair was postponed until late November. Rep. Sean Patrick Maloney (D-N.Y.) and Tony Cardenas (D-Calif.) are vying for the position, according to The Hill.