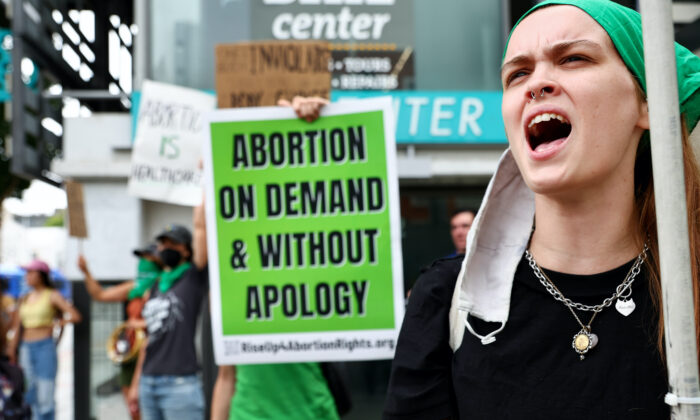 The Supreme Court’s decision in Dobbs, which overturned, Roe v. Wade, has resulted in a surprising twist. Democrats had lauded the Roe decision and protested its overturning, calling it everything from white supremacy to MAGA extremism. But we have since learned that in fact Democrat lawmakers widely believe the abortion protections provided by Roe are wholly inadequate.

Under Roe, a woman’s right to choose without any restrictions was only assured in the first trimester. It is now clear that the official position of the Democratic Party is that a “pregnant person” (as they call them since determining not just women can get pregnant), shall have unfettered right to have an abortion at any time, right up until the day the baby is set to be delivered. This is despite this position having virtually no public support. According to a recent Rasmussen Poll, even in liberal California only 13 percent of people support such a right. The plurality of people (32 percent) support abortion rights only during the first twelve weeks.

The most recent evidence of this is the California legislature’s passage of AB 2223. It now awaits Governor Gavin Newsom’s signature. The bill recites the cause of “reproductive justice,” which it states, “is a framework created by Black women in 1994 to address the intersectional and multifactored issues that women of color and their families face in society.” It then goes on to effectively legalize abortion right up to the date of delivery.

It protects women from any criminal or civil liability for an abortion at any time. It expressly protects women who engage in a “self-managed abortion, which means ending one’s own pregnancy outside of the medical system.” The legislature, consisting of a Democrat super majority in both houses, passed the bill by a combined vote of 84 to 28.

The bill further makes a third trimester abortion “unauthorized” only if the doctor makes an affirmative determination that the pregnancy “posed no risk to life or health of the pregnant person.” This effectively legalizes abortion up to the time of birth since no doctor would maintain that pregnancy poses zero risk to a woman’s health.

Lest there be any doubt about their intentions, California Democrats have also voted to put on the November ballot an initiative to create an express, constitutional right to an abortion without limitation. The proposed amendment reads:

Notice that the amendment places no limitation on these rights. Thus, it appears women, and doctors, will have the right to abort a child right up until the time of birth. A one hundred percent, fully formed and ready for delivery baby could be killed and removed and thrown in the trash under this amendment. This certainly blurs the line between birth and abortion. For instance, does the baby have to be killed while inside the womb, or can it be killed outside the womb?

Some suggest it would only protect abortion rights pre-viability, i.e. in the first six months, because a federal law remains in place that prohibits “partial birth abortion,” meaning an abortion involving “a surgical procedure that removes an intact fetus from the uterus.” But federal law also prohibits the use and sale of marijuana, yet it does nothing to stop it in California where it is legal.

Further, Democrats at the federal level also support abortion rights up to birth. House Democrats last year passed the Women’s Health Protection Act, which was reintroduced in the Senate this year following the Dobbs ruling. Like the California bill, the Act first recites a bunch of nonsense about “reproductive justice” which it defines as opposing “systems of oppression, lack of bodily autonomy, white supremacy, and anti-Black racism.”

It then guarantees a “pregnant person” the right to an abortion all the way up to the date of delivery provided the “health care provider” determines that the continued pregnancy “would pose a risk to the pregnant patient’s life or health.” Again, this is an easy determination for a provider to make. While the bill contains many definitions, there is no definition of “health.” Thus, elevated cholesterol levels or high blood pressure would satisfy this condition, not to mention that all deliveries pose a health risk!

Lest there be any remaining doubt about the Democratic Party position, there are some who are so bold as to state it succinctly. California Congressman Josh Harder is one such Democrat. While campaigning a few years ago, he stated, “I’m 100 percent pro-choice. And the reason for that is that I think that women should be, and are, the best judges for what they can actually [do] with their bodies.”

This puts Harder and his fellow Democrats on the outer fringe of public opinion. It’s likely that none of these Democrats have actually observed an abortion, let alone one of a fully formed fetus with a heartbeat (about eight weeks) or the partial birth abortion of a baby ready for delivery in the ninth month.

Would that not be the least amount of due diligence they should undertake before so boldly asserting a “pregnant person’s” right to choose right up to delivery? Perhaps then “reproductive justice” would focus not just on alleged systemic racism but also on the life of innocent babies.