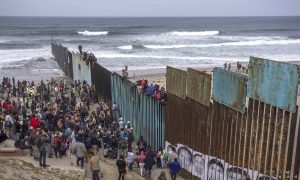 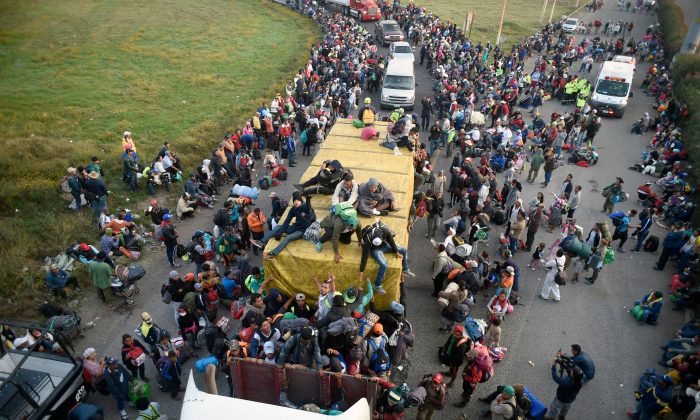 Migrants from poor Central American countries -mostly Hondurans- moving towards the United States in hopes of a better life, wait along the Irapuato-Guadalajara highway in the Mexican state of Guanajuato for a ride to Guadalajara on their trek north, on Nov. 12, 2018.(Alfredo Estrella/AFP/Getty Images)
Viewpoints

Democrats Pushed the Trump Administration Into the Interim Asylum Ban

Ignore the media hype, Congress could have fixed this problem but refused to score political points

The American Civil Liberties Union (ACLU) has already filed at least one lawsuit against the Trump administration for its new policy that would temporarily deny asylum to those who travel to the Mexican border via another country, until Congress can resolve the situation.

Trump’s new policy may not pass legal scrutiny, but the administration should make a strong case for it—not as a permanent solution, but as a means to an end in resolving the current emergency at the border, while also maintaining national security as a priority.

In fact, if Democrats cared as much about asylees as they say they do, they’d have resolved this via Congress: Instead, they refused, in order to score political points.

Trump’s new interim rule, issued jointly by the Department of Justice (DOJ) and the Department of Homeland Security (DHS), took effect July 16. It dictates that those who travel through another country won’t be eligible for asylum at the U.S. southern border unless they have applied for and have been denied asylum in the countries they pass through on the way to the United States.

AP predicts it will likely affect Guatemalans and Hondurans the most, given the state of their countries and the route they take to get to the United States.

“While the recent supplemental funding was absolutely vital to helping confront the crisis, the truth is that it will not be enough without targeted changes to the legal framework of our immigration system. Until Congress can act, this interim rule will help reduce a major ‘pull’ factor driving irregular migration to the United States and enable DHS and DOJ to more quickly and efficiently process cases originating from the southern border, leading to fewer individuals transiting through Mexico on a dangerous journey. Ultimately, today’s action will reduce the overwhelming burdens on our domestic system caused by asylum-seekers failing to seek urgent protection in the first available country, economic migrants lacking a legitimate fear of persecution, and the transnational criminal organizations, traffickers, and smugglers exploiting our system for profits.”

The administration has chosen to do this because the country is facing a border emergency. As Attorney General William Barr said:

“This Rule is a lawful exercise of authority provided by Congress to restrict eligibility for asylum. The United States is a generous country but is being completely overwhelmed by the burdens associated with apprehending and processing hundreds of thousands of aliens along the southern border. This Rule will decrease forum shopping by economic migrants and those who seek to exploit our asylum system to obtain entry to the United States—while ensuring that no one is removed from the United States who is more likely than not to be tortured or persecuted on account of a protected ground.”

While detention center numbers are declining, Border Patrol and Immigration and Customs Enforcement (ICE) facilities are all still overcapacity and facing incredible criticism for it.

While Trump’s ban will likely “exacerbate overcrowding at severely strained U.S. immigration detention centers and makeshift holding areas,” as AP states, it would only do so temporarily. Placing a hold on incoming asylees would allow Border Patrol and ICE to ensure a method to the madness, to create order from the current chaos.

The Case for Trump’s Ban

While most outlets, including publications such as Reason, are already pointing out that Trump’s ban may not survive legal scrutiny, his administration could make a strong case for it, given the current stalemate in Congress, and the country’s unique immigration circumstances.

While this is a nation of laws, and a place with an immense amount of legal protections and opportunities for asylees, the interim final rule “uses the authority delegated by Congress in section 208(b)(2)(C) of the Immigration and Nationality Act to enhance the integrity of the asylum process by placing further restrictions or limitations on eligibility for aliens who seek asylum in the United States.”

Near-record-breaking immigration numbers mean that detention centers along points of entry are overflowing, presenting officials with a crisis not seen in their lifetime. Democrats, particularly Rep. Alexandria Ocasio-Cortez (D-N.Y.), observing this overflow, seized on the opportunity to score political points. She immediately placed blame on Border Patrol, ICE, and the Trump administration for everything from failing to provide beds and toothbrushes, to separating children from their parents.

Ironically, an asylum ban would provide officials an opportunity to fix the very issues Democrats are criticizing. Yet now that the administration has taken a step toward one of many resolutions, the ACLU filed a lawsuit and, as the Reason article stated, the administration faces criticism for implementing the ban via administrative fiat, not “normal legislative channels.”

While it’s true the golden rule that conservatives often cited during the Obama years, “Rule by executive fiat, die by executive fiat,” might apply here, it’s also clear why the administration didn’t follow normal legislative channels: A congressional solution for a border emergency is impossible, given the current political makeup.

The tough truth for Democrats to swallow is that they don’t care as much about asylees as they want to appear to. If they did, they would’ve tackled this issue—presenting problems and solutions—when the Obama administration wrangled with it, or they could deal with the emergency via Congress today. Yet they refuse to do that, too.

Interfering with Trump’s ban, either through a lawsuit or circulating concerns that it will cause detention centers to overflow even more, makes Democrats look like they care about asylees while preventing Trump from political success. Regardless, Democrats have pushed the administration into doing what is best for national security—and asylees—because they refused to take action themselves.