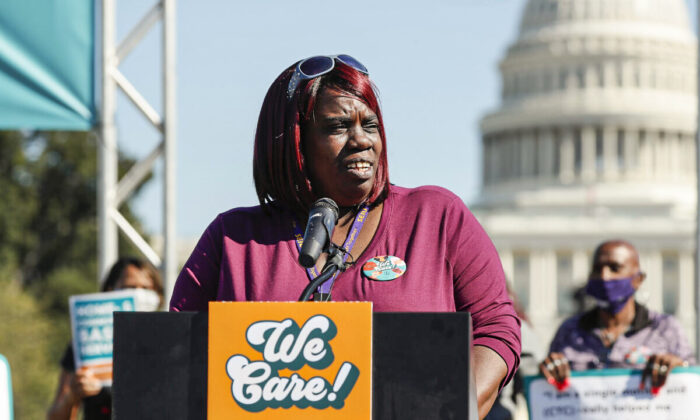 Provisions in the Democrats’ proposed “Build Back Better Act,” a massive social spending bill that will cost trillions of dollars, will boost labor union coffers by billions of dollars, according to a new report from the Freedom Foundation in Washington state.

In the report, Maxford Nelsen, director of labor policy for the Freedom Foundation, states that the bill, H.R. 5376, would vastly expand Medicaid funding for home- and community-based services (HCBS) that provide in-home care to, and prevent the institutionalization of, adults with disabilities. Such services are provided via state-designed and operated programs operating within federal parameters. The workers in those programs are prime targets for union recruiters.

It’s unclear what the bill will cost. It was initially expected to cost more than $3.5 trillion over 10 years, but recent estimates put it closer to $1.75 trillion. The measure would be funded by taxing corporations, and wouldn’t increase the federal deficit, its backers insist.

The bill offers states hundreds of billions of dollars in additional federal funds to expand their HCBS programs.

Boosting home care unions is a goal of the bill. Rep. Robin Kelly (D-Ill.) said the bill would allow “organizations like SEIU” to “advocate” for home care workers. The SEIU (Service Employees International Union) endorsed Kelly in 2020 and contributed thousands of dollars to her campaign, according to the report.

The report also states that even though additional funding for HCBS may be justified, the federal funds come with strings attached that would steer potentially billions of dollars in Medicaid funds to unions representing home care aides, including SEIU and the American Federation of State, County and Municipal Employees (AFSCME).

Freedom Foundation previously studied the issue and found that in those states, about 350,000 caregivers are having union dues withheld, amounting to about $150 million a year in revenue for SEIU and AFSCME, he said.

“Most insidious, though, is an incentive to restructure their home- and community-based services programs in a way that would create the legal framework to force caregivers to pay union dues as a condition of employment.”

In 2014, the Supreme Court ruled in Harris v. Quinn that “it’s unconstitutional to require Medicaid-paid ‘quasi-public employees’ … to pay union dues as a condition of employment,” Nelsen said.

But unions like SEIU and AFSCME have been trying to work around that decision for years, he said.

“Out here in Washington State, SEIU pressured the state legislature and the governor to adopt legislation privatizing the workforce. So instead of being employed by their client, and paid by the state, and unionized under our state collective bargaining laws for public employees, the caregivers would become employees of a private company that contracts with the state to serve the Medicaid population.

“And as employees of a private company, the caregivers would then fall under the National Labor Relations Act instead of our state public sector collective bargaining laws. And because Washington state does not have a right-to-work law on the books, the theory goes, the caregivers would be subject to mandatory union dues again,” Nelsen said.

Nelsen said he’s convinced the bill’s supporters “want to replicate what Washington state has done around the country and put in place again, this workaround … [which] would allow SEIU and AFSCME to force these caregivers to pay union dues again.”

The bill provides that states receive more federal money if they adopt what is called an “agency with choice or a similar service delivery model” to register qualified direct care workers, recruit and train independent providers, and make sure programs do not “promote or prevent the ability of workers to form a labor organization or discriminate against workers who may join or decline to join such an organization.”

By running things like these training programs, “unions would see increases in their revenue of billions of dollars should this legislation in its current form become law,” Nelsen told The Epoch Times.

The bill is “using Medicaid money, which is meant for the most vulnerable in society, to prop up and subsidize a politically extreme far-left special interest group,” Nelsen said.

Although the measure had stalled as more moderate Democrats squabbled with more left-wing Democrats over its contents, it now appears to be moving forward.

After Congress gave final approval to the $1.2 trillion proposed Infrastructure Investment and Jobs Act late on Nov. 5, the next morning at the White House, Biden praised the House for also taking “a big step toward” passing the proposed Build Back Better Act by passing a procedural motion. The House will take up the bill the week of Nov. 15, he said.

The bill “will be a once-in-a-generation investment in our people,” Biden said.

Representatives of SEIU and AFSCME couldn’t be reached for comment over the weekend.