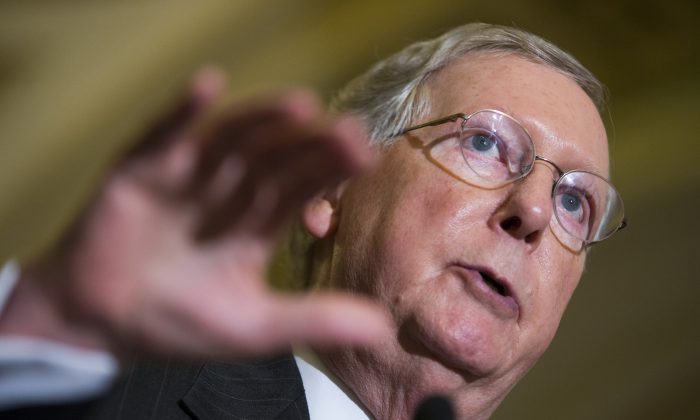 WASHINGTON—The Senate is preparing to vote on legislation that would keep the government open beyond next Wednesday’s deadline at a price Democrats are certain to reject — stripping taxpayer money from Planned Parenthood.

The stopgap spending bill is widely expected to fail Thursday. The next steps aren’t set in stone, although Senate Majority Leader Mitch McConnell, R-Ky., has promised there won’t be a government shutdown. That suggests he would soon press ahead with a stopgap measure that’s free of the Planned Parenthood dispute.

Some of Capitol Hill’s most ardent conservatives are unafraid of extending the battle over Planned Parenthood, even if it would result in a partial government shutdown. GOP leaders, on the other hand, are motivated chiefly by a desire to avoid another shutdown like the 2013 episode that hurt the party politically, and McConnell appears to enjoy support from a majority of the Republican rank and file.

“I’d rather it defund Planned Parenthood, but if the votes aren’t there I don’t see the point of having a standoff,” said Sen. Roger Wicker, R-Miss., chairman of the Senate GOP’s campaign committee.

Sen. Ted Cruz, R-Texas, who is using his rivalry with GOP leaders in Washington to help define his presidential campaign, responded in an editorial essay in Politico that simply the threat of a shutdown is sending “Republican leadership running for the hills.”

McConnell set up Thursday’s vote but appears likely to pivot to a more traditional temporary funding bill that would win support from Senate Democrats and President Barack Obama. Delivery of such a measure to the GOP-controlled House just a day or two before a potential shutdown seems aimed at giving GOP leaders in that chamber the push they need to roll over recalcitrant tea partyers opposed to a stopgap bill that fails to take on Planned Parenthood.

Internal GOP divisions over what tactics to use to take on Planned Parenthood have House Republican leaders tied in knots, and they’ve been unable to take on their traditional role of initiating spending legislation. There are rumblings among conservatives over a vote to remove House Speaker John Boehner, R-Ohio.

Planned Parenthood has long been targeted by Republicans, but the effort took on greater urgency after the release of secretly recorded videos that show organization officials discussing methods of procuring tissue from aborted fetuses and compensation for shipping it to researchers. The group says it is doing nothing wrong and isn’t profiting from such practices in violation of federal law.

Both public and internal GOP polling shows that voters do not favor shutting down the government over Planned Parenthood’s practices.

Eleven GOP House freshmen — several face difficult re-election races next year in Democratic-leaning districts — say they oppose a shutdown confrontation. A “Dear Colleague” letter by New York Rep. Elise Stefanik and Pennsylvania Rep. Ryan Costello promises to “avoid repeating the mistakes of the past,” a reference to the GOP-sparked 2013 shutdown over implementation of the health care law.

“We are writing today to express our strong support for a funding resolution that will avoid another unnecessary and harmful government shutdown,” the GOP freshmen wrote.

Other GOP freshmen from conservative districts, such as Ken Buck of Colorado and Jody Hice and Barry Loudermilk of Georgia, have signed on to a more confrontational strategy, along with prominent conservatives like Reps. Jim Jordan, R-Ohio, and Mick Mulvaney, R-S.C.